Ahead of the US election next month, President Trump and rival Joe Biden held a heated debate over US energy policy, and the need for a shift towards renewable technologies 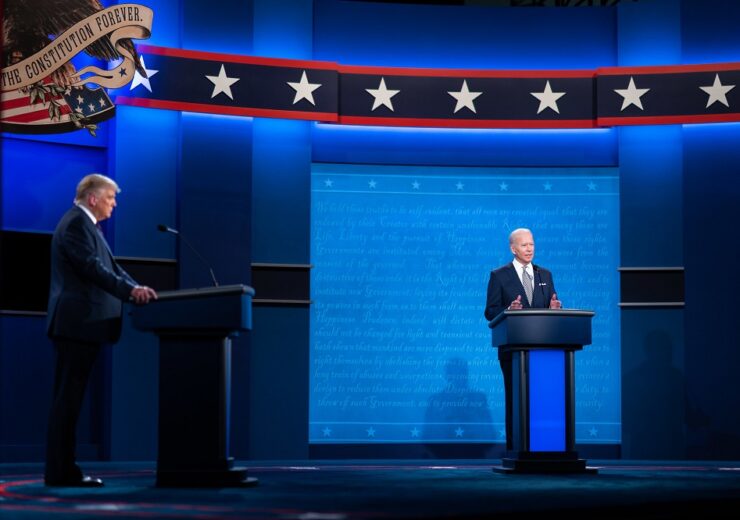 US presidential rivals Donald Trump and Joe Biden clashed over energy policy during their final televised debate before next month’s election, with the future of oil and gas taking centre stage.

Pushed on his plans for this key industry, Biden said he would pursue a transition to renewable energy over time, and bring an end to federal subsidies.

“We have to move toward net-zero emissions,” he said. “The first place to do that by the year 2035 is in energy production.”

The president also claimed his rival intends to ban fracking in the US – a contentious issue for many voters where livelihoods and communities revolve around this industry.

Biden dismissed the claim as untrue, saying he has never said he opposes fracking, and ruled out an outright ban. “Fracking on federal land, I said No fracking or oil on federal land.”

The former vice president added: “What I will do with fracking over time is make sure that we can capture the emissions. We can do that, and we can do that by investing money in doing it, but it’s a transition to that.”

Energy and climate policy has become a critical battleground in the US presidential race this year, with Trump and Biden offering two starkly different visions of America’s role in the clean energy transition.

President Trump, who has set in motion the US withdrawal from the Paris Agreement on climate change, has championed deregulation of the oil and gas sector, citing energy independence and domestic job creation.

“We are energy independent for the first time,” he said. “We don’t need all of these countries that we had to fight war over because we needed their energy.”

Biden, on the other hand, has committed to rejoining the Paris Agreement on day one of his presidency, and launching a wave of investments into renewable energy with the aim of deep decarbonisation by mid-century – a goal to which countries around the world are also committing.

“We’re told by all the leading scientists in the world we don’t have much time, we’re going to pass the point of no return within the next eight to 10 years,” said Biden of the “existential threat” posed by climate change.

“Four more years of this man [Trump] eliminating all the regulations that were put in by us to clean up the climate, to limit the emissions, will put us in a position where we’re going to be in real trouble.”

He was referring to a string of regulatory rollbacks introduced by the Trump administration that have loosened emissions standards and environmental protections in the country.

These include a reversal of methane-emission standards for the oil and gas industry, opening up permit restrictions for resource extraction on protected federal lands, and loosening vehicle-emission rules designed to improve air quality.

Asked about the impact of these rollbacks on public health, President Trump cited the economic benefits of deregulation in oil and petrochemicals sectors.

“The families that we’re talking about [people of colour who live near to oil refineries and chemical plants] are employed heavily and they are making a lot of money – more money than they’ve ever made,” he said. “They’re making a tremendous amount of money.”

Biden described his own climate and energy plan as one that would “create millions of jobs” and economic growth, as industries like wind and solar are scaled up over the coming years.

“The fastest growing industry in America is solar energy and wind. It’s the fastest growing jobs and they pay good prevailing wages, $45 to $50 an hour,” he added. “We can grow and we can be cleaner if we go the route I’m proposing.

“This plan has been endorsed by every major environmental group and every labour group, because they know the future lies in us being able to breathe, and they know they’re good jobs.”

But Trump disagreed. “This is the craziest plan that anybody has ever seen and this wasn’t done by smart people. I don’t even know how it can be good politically,” he said.

“I know more about wind than you do [Biden]. It’s extremely expensive. Kills all the birds. It’s very intermittent.

“Solar doesn’t quite have it yet. It’s not powerful yet to really run our big, beautiful factories that we need to compete with the world.”

Earlier this month, the International Energy Agency identified solar power as “the cheapest source of electricity in history” in its annual World Energy Outlook, and an energy source that will set “new records for deployment every year after 2022”.