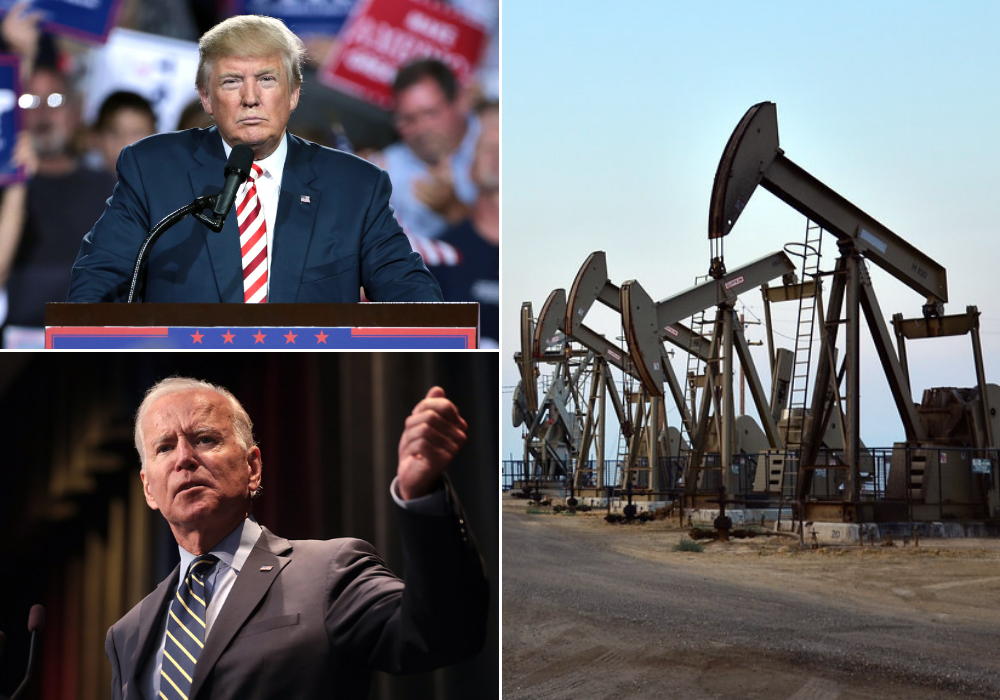 With a Democrat win in the US election, GlobalData's Adrian Lara believes there will be an "additional layer of uncertainty" on the oil and gas industry outlook (Credit: Flickr/Gage Skidmore/Bureau of Land Management California)

The 2020 US presidential election is just around the corner and it could have a profound effect on the country’s oil and gas industry moving forward.

Over the past decade, the fossil fuel industry has experienced a significant boom – largely down to the unprecedented rise in US shale – as the nation now leads the world in oil production.

President Donald Trump’s administration has championed a free-market policy in which all fuels and technologies have an opportunity to contribute to the national goal of energy dominance, while Democrat candidate Joe Biden has laid out his vision to address climate change and launch a $1.7tn “clean energy revolution” over the next decade.

GlobalData oil and gas analyst Adrian Lara believes a Trump victory on 3 November would mean that regulations and other incentives to the industry would remain the same in principle.

“The trend of easing regulations that the Trump administration has followed could continue,” he adds.

“Also, if the oil price stays stable above $45 per barrel, or if prices were to exhibit an upward trend, then with no changes to the sector status quo the industry would react with an increase in production.”

But, with Biden’s proposals to put the US on the track towards cleaner energy and carbon-neutrality by 2050, Lara says the oil and gas industry could be “impacted directly” in the short and long term.

“The coronavirus pandemic has led to a drastic drop in oil demand and the goals of decarbonisation of economies and the energy sector has already been challenged by this,” he adds.

“With a Democrat win in the US election, there will be an additional layer of uncertainty on the oil and gas industry outlook.”

Trump’s commitments to the oil and gas industry

From the moment former US president Barack Obama took office in 2009, production from shale and tight oil sky-rocketed through to 2017 in response to advances in drilling technologies.

According to Rystad Energy, the 7.2% compound annual growth rate (CAGR) over this period is the highest in US history for a single president, despite the oil market downturn in 2015 and 2016.

After Trump entered the White House in January 2017, production continued to increase with a CAGR of 7.1%, even though the market has experienced another downturn.

One of the 74-year-old’s most controversial rollbacks was the decision to pull the US out of the Paris Agreement – an international climate pact signed by delegates of 196 nations, which aims to cap the rise in global temperatures to “well below” 2C by 2100.

Of all the countries to sign up to the treaty, the US was the second-highest emitter of greenhouse gas emissions behind China – making its commitment integral to limiting the impacts of climate change.

On announcing the nation’s official withdrawal, Trump claimed the Paris accord would “undermine the US economy” and put the country at a “permanent disadvantage”.

The US will leave the agreement on 4 November – a day after the election takes place.

A further step by Trump was taken in early 2017, when he signed executive orders to allow construction work to begin on the contentious Dakota Access and Keystone XL oil pipelines – proposals that were previously blocked by Obama, who Biden served under as vice-president.

Keystone XL, which is a 1,179-mile pipeline project running from the oil sands of Alberta, Canada, to Texas, US, would provide improved transport links and access to supplies, as well as industry investment, additional tax revenue and a wave of jobs.

But, following environmental concerns, the project is currently on hold, having not been granted a Nationwide Permit 12 (NWP 12) – a long-standing, streamlined blanket approval from the US Army Corps of Engineers for water body and wetland crossings under the Clean Water Act.

Another action taken by Trump’s administration was reducing the federal corporate income tax rate from 35% to 21% when the 2017 Tax Cuts and Jobs Act (TCJA) was passed by Congress and signed by the president in December of that year.

This cut in the marginal tax rate has improved the liquidity of oil and gas producers, reducing breakeven prices, according to Rystad Energy.

In a sample of 50 operators, a study by the Norway-based energy researcher estimates that operating cash flows for all companies could increase by more than $5bn per year – averaging about $250m to $300m per year in tax benefits – due to the TCJA.

Easing of drilling restrictions in Alaska

Lara says a major issue for oil and gas currently is the “slow recovery of oil demand”, which is “dependent on many other things outside of the industry”.

He adds that one good example of this is the easing of the regulations for drilling in the Alaskan Arctic National Wildlife Refuge (ANWR) federal lands, in a move that overturns six decades of protections on what is the nation’s largest remaining strech of wilderness and is enhabited by polar bears.

“This means leasing acreage there will be possible,” says Lara. “But given the situation in the sector, this does not necessarily translate into new projects in the near term.”

What could a Biden election victory mean for the US oil and gas industry?

Biden, who has placed tackling environmental issues at the heart of his energy plan, has pledged that the country will immediately re-enter the Paris Agreement if he is elected, while also stating a desire to “reverse Trump’s rollbacks of 100 public health and environmental rules”.

The 77-year-old has also proposed a potential ban on issuing new drilling permits on federal lands.

While Lara says this would not mean much at a national level – as they currently make up less than 20% of the country’s drilling – it is an important policy for the likes of New Mexico, which houses some of the Permian Basin’s Delaware region and gets 65% of its production from federal acreage.

He adds that if Biden does win the election and the ban is imposed, then there will be two trends.

“First, obviously the states with higher percentage of federal land available for drilling will have a hard time maintaining their production,” says Lara.

“Production from horizontal wells declines very quickly once it’s started and needs to be maintained by the constant drilling of new wells.

“Hence, depending on what type of acreage is predominant for each company, we probably should be seeing smaller companies with less favourable positions on federal lands collapse, as well as more merger and acquisition activity to help with acreage consolidation for some major operators.”

Lara suggests there is also a chance Biden could carry on restricting the approval of some “key infrastructure” such as pipelines.

But he adds that implementing these measures in reality is “more difficult and nuanced than what is said during the election campaign”.

Could a Biden victory speed up companies’ energy transitions?

There has been much speculation about whether a Democrat success at the polls could lead to a speed up in companies’ energy transitions.

Some of the oil and gas industry’s biggest firms – many of which have operations in the US – have been increasing their renewable energy portfolios in recent years and are now making a conscious effort to reduce their emissions intensity.

Lara believes there would be an impact at least in “companies’ narratives” and in “establishing goals towards net-zero emissions” should Biden become president.

“But energy transitions are gradual and, in the case of oil and gas uses, there are many key industry sectors that cannot yet migrate to cleaner or renewable energies – such as heavy transportation, aviation, cement, steel and petrochemicals – mainly because the technology is not there yet,” he adds.

“Oil and gas production will continue to be required and companies will need to make it much clearer to society and investors that they are investing in developing first technologies to reduce or capture emissions, and potentially supporting the development of other technologies to help migrate other sectors into cleaner energy consumption.”

What could a Biden victory mean for US shale?

The Democrat candidate has actually been relatively cautious with his statements around shale in recent weeks and has suggested that fracking will not be banned.

The potential impact on shale comes back to whether the drilling ban on federal lands does come into force, as production levels look almost certain to take a hit if that is the case.

Lara says: “Approximately 30% of acreage where horizontal drilling and hydraulic fracturing is happening in the US is located on federal land.

“Some states have larger portions of federal to private land available for drilling, which means they will be affected to a greater degree.

“For example, in New Mexico, more than 80% of all the permits issued since June this year are on federal land.

“Such a high number can be also explained by the fact that companies operating in that state are rushing to get as many drilling permits as possible in case Biden wins the election.”

By 2025, research by GlobalData estimates a drilling ban on federal lands will lead to production supply from US shale dropping by at least one million barrels of oil compared to its projections for a Trump win.

But Rystad Energy notes that a Biden victory could spell the end of Trump’s ongoing trade war with China, which would “help support demand and oil prices”.

The researcher believes the potential federal land fracking ban and an increase in measures to prevent the spread of Covid-19 would also benefit oil prices in the short term.

But, while a Biden victory could provide some quarters of the oil and gas industry with a temporary boost over the next couple of years, its long-term future may be slightly less certain in his hands due to the looming threat of more fossil fuel restrictions.