At President Trump's request, the US Environmental Protection Agency has significantly relaxed methane regulations for oil and gas companies 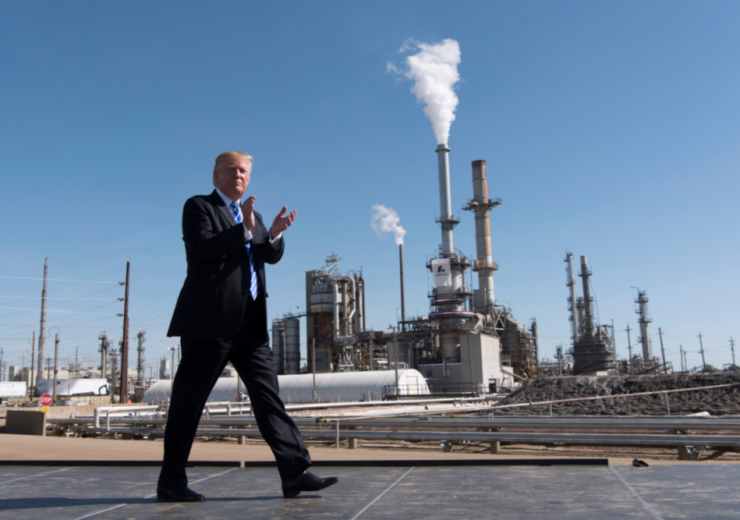 The rollbacks have prompted a strong reaction from environmental groups -and even the oil industry itself (Credit: whitehouse.gov/D. Myles Cullen)

Environmental groups are planning legal action against the Trump administration following a decision to roll back regulations on methane emissions in the US.

The US Environmental Protection Agency (EPA) confirmed yesterday (13 August) that oil and gas companies will no longer have to detect and repair methane leaks at their facilities – formailising a proposal first suggested last year.

It marks the repeal of the last remaining major Obama-era climate regulation – the 2016 Oil and Natural Gas New Source Performance Standards (NSPS) – and is expected to provide a financial boost to the nation’s fossil fuel companies that have been hit hard by the coronavirus pandemic.

“Like so many other administration rollbacks that have already been rejected by the courts, this one ignores the science, the public health impacts and the low-cost solutions we have at hand,” he added.

“These sensible pollution controls have been working to protect Americans since 2016. Investors, states, community groups and even leading oil and gas producers have all called on the EPA to retain and strengthen methane safeguards.

“The administration has no scientific or public health basis for taking this action, and EDF will forcefully oppose it in court.”

It is not the only group planning legal action. The US-based Natural Resources Defense Council (NRDC) also intends to appeal to the courts, claiming “three-quarters of Americans in key states strongly support updating and strengthening limits on methane pollution”.

Impact of relaxing US methane regulations

The latest round of industrial deregulation in the US follows President Trump’s executive order to review and, if appropriate, revise Obama’s NSPS to ensure it “did not burden the development or use of domestically-produced oil and natural gas”.

It comes despite research from the UN’s Intergovernmental Panel on Climate Change (IPCC) stating that methane, the largest component of natural gas, is about 25 times more powerful than carbon dioxide at warming the Earth’s atmosphere, on a 100-year timescale.

Speaking at the Energy Innovation Center in Pittsburgh, Pennsylvania, EPA administrator Andrew Wheeler said his organisation has been “working hard to fulfil President Trump’s promise to cut burdensome and ineffective regulations” for the US’ domestic energy industry.

“Regulatory burdens put into place by the Obama-Biden administration fell heavily on small and medium-sized energy businesses,” he added.

The EPA claims the new rules will “reduce regulatory burdens” for oil and natural gas firms while “protecting human health and the environment”.

But last year, the agency admitted that the alterations could lead to an extra 370,000 short tonnes of methane – the equivalent of about 8.4 million tonnes of carbon dioxide – being emitted into the atmosphere.

The EPA claims Trump-era deregulation actions have saved the US an estimated $94bn in “unnecessary regulatory costs”.

What do the EPA rules set out?

“The separate regulation of methane imposed by the 2016 rule was both improper and redundant,” it said in statement.

Meanwhile, oil and gas transmission and storage operators have also been freed from methane-specific controls, as well as being exempted from the wider VOC regulation.

The EPA also made several “commonsense” changes it says will benefit smaller oil and gas operators in the country, including an exemption from having to install methane-monitoring equipment and allowing a more flexible timetable for making leak repairs “to respect the realities of the oil and gas industry”.

Reaction from the oil and gas industry

The American Petroleum Institute (API), which lobbies aggressively on behalf of US oil and gas operators, supports the revised changes and believes they are “consistent with the requirements of the Clean Air Act”.

But multinational oil major BP remains committed to adhering to the regulations imposed by the Obama administration, according to the Financial Times. BP has recently announced a set of policies to lower its emissions footprint, including tighter controls on methane monitoring.

David Lawler, chairman of BP America, said the company opposed the rollback and believes the direct federal regulation of methane emissions is a “critical step to protecting the environment and keeping the gas in our pipes in order to provide it to the market”.

The regulations could be quickly reversed if Joe Biden, Democrat candidate for the upcoming US presidential election, is voted into office and his party takes control of the Senate. He has promised to impose “aggressive” methane pollution regulations for oil and gas companies.