Charting Guyana’s whirlwind ascendancy to the brink of oil superstardom

A series of successful offshore discoveries by ExxonMobil - estimating eight billion barrels of recoverable resources - has catapulted Guyana to global prominence, promising to transform the tiny rainforest nation into a major oil economy 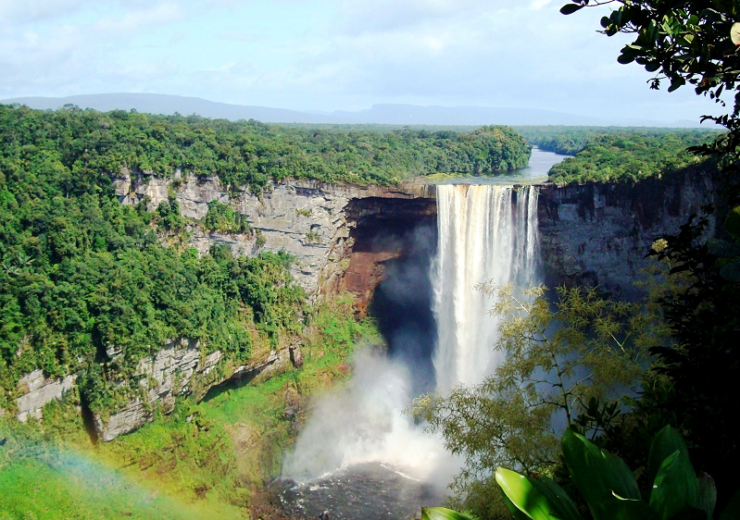 Guyana is well known for its rainforests and the Kaieteur Falls, but it is now poised to become a key oil economy (Credit: DIMO/US Air Force)

Cushioned between Venezuela, Brazil and Suriname at the northern end of South America, the tropical nation of Guyana has become an unlikely beacon for Big Oil exploration in the past few years.

The former British sugar colony, which claimed its independence from crown rule in 1966, is characterised by vast, dense rainforest and a small, ethnically-diverse population – the majority of which inhabits a narrow strip of land along the North Atlantic coastline.

Its modest economy is heavily dependent on agriculture and mining, but a chance 2015 offshore oil discovery by ExxonMobil promises to transform this picture, and make Guyana a lucrative new frontier of crude oil prospecting.

In 2017, announcing plans to develop its first drilling operation in the region – the Liza deep water oilfield on the Stabroek Block, 120-miles offshore from the Guyanese capital Georgetown – Exxon said it had uncovered “one of the largest oil discoveries of the past decade”, promising recoverable resources of up to 2.5 billion barrels of oil equivalent.

Since then, the US oil giant has gone on to confirm 15 additional discoveries in the depths offshore Guyana, upping its resource estimates for the region to more than eight billion barrels.

Others have joined the exploration frenzy too, with notable involvement by Spain’s Repsol and UK-based Tullow Oil – although to date neither has been able to confirm a commercially-viable resource.

US producer Hess and state-owned China National Offshore Oil Corporation each have stakes in the Stabroek block, as part of a consortium arrangement with Exxon subsidiary Esso.

As for Exxon itself, it began first oil production at the Liza field in December 2019, saying the operation would be up to speed at its full 120,000 barrels per day (bpd) capacity within a matter of months.

A second phase of the Liza field development is currently underway, and the oil firm has said it expects overall output capacity from the Stabroek Block to hit 750,000 bpd by 2025.

To put that in perspective, World Bank figures show Guyana’s total annual GDP to be around $3.9bn as of 2018.

Latest figures from the International Monetary Fund (IMF) forecast a huge 85.6% increase to the country’s GPD in 2020 in anticipation of the incoming oil boom.

The caveat to all this is how the oil industry will emerge from the market crisis that has taken hold since the start of 2020 – with decimated demand caused by coronavirus and the escalation of a price war conspiring with pre-existing environmental pressures to plunge the industry into unprecedented levels of risk and uncertainty.

Capital spending budgets for new exploration and production (E&P) projects have been slashed industry-wide as oil companies seek to cut costs wherever possible in a bid to weather a storm that has already wiped huge sums from their collective market value.

Nevertheless, Guyana’s financial prospects appear poised to change dramatically in the coming years, as its crude reserves sound the siren call for major players in the industry.

Big questions remain over how oil bonanza will be managed

Such a whirlwind transformation of this tiny national economy raises several important questions about how Guyana – a country of fewer than 800,000 people – will be able to cope with its new status on the world stage and reap the full benefit of its natural resource abundance.

Transparency advocates have criticised the 40-year licensing deal struck between Exxon and Guyanese officials in 2016, claiming the income split – Guyana stands to receive 52% of the profits from the Stabroek oilfield – is too heavily weighted in favour of the Texas oil firm, depriving Guyana of billions of dollars in national earnings.

Meanwhile, the underdeveloped commercial and regulatory infrastructure in the country poses a significant set of problems for operators like Exxon to consider, as they seek to maximise their returns on investment in the region – a figure that totalled around $8.1bn between 2015 and 2019.

Rystad’s vice president of upstream research Sonya Boodoo says: “Guyana’s rising oil revenues will make a huge difference in the continued development of the country. At the same time, for it to realise the full potential of these resources, a stable regulatory and fiscal environment will be a key factor.”

National elections were held in March this year, but were mired in counting controversy, with a clear winner yet to be announced between the two dominant rivals – the APNU-AFC coalition led by incumbent president David Granger, and the People’s Progressive Party, led by Irfaan Ali.

Plans for a recount are on the cards in an election that will be crucial to shaping the future identity of Guyanese oil, and the potential revenues it promises to unlock.

Will Guyana get a fair share of the profits from oil exploration in its waters?

Criticism aimed at the Stabroek licensing deal points to the relatively low profit share to which Guyana is entitled from the sale of oil extracted from its deep waters.

While Exxon and some industry analysts have argued the split is a fair one for a country in which oil exploration has historically proved difficult – companies had been investigating the waters around Guyana for decades to no avail – others argue it does not reflect the new resource-rich reality of the national industry.

Boodoo explains: “The contract is reflective of the situation at the time of signing back in 1999, when multiple companies had encountered several dry exploration wells.

“At the time, E&P companies were seen to be taking a considerable risk by conducting deep water exploration in the region. To make such frontier drilling attractive, Guyana offered competitive fiscal terms.”

But transparency group Global Witness argues that, having previewed the vast potential of its new Stabroek discovery in 2015, Exxon moved swiftly to “aggressively negotiate a deal with inexperienced officials” and extend its contract before announcing the size of its find three days later.

Research from Berlin-based financial analysts Open Oil, which was commissioned by Global Witness, suggests Guyana stands to lose out on $55bn in oil revenues over the life of the Stabroek field, compared to if a 69% profit share – one that would have been “well within international norms” – had been agreed.

Whether or not to renegotiate the terms of the agreement with Exxon will become a key issue for whichever political entity emerges victorious from the halted election process – while new licences offered for oil operations will be expected to ensure Guyana takes a greater share of future proceeds.

Boodoo adds: “As Guyana firms up its credentials as an attractive upstream destination, we expect that new awards of production sharing agreements will likely stipulate revised fiscal parameters, with the higher government take.”

Boosting its credentials as a viable place to do business will not be an easy task for Guyana, regardless of its new-found oil wealth.

The country has hereto subsisted on small-scale mining, agriculture and other industrial activity, and the limitations of its national infrastructure, industrial policies and fiscal frameworks reflect that.

GlobalData’s senior oil and gas research analyst Adrian Lara explains: “As of now, Guyana’s government is unprepared and does not have a legal and regulatory framework to manage properly the pending influx of oil revenues.

“The government needs to set up a transitional plan as soon as possible, such as a sovereign wealth fund to manage its wealth, and to implement a plan to invest in other industries – particularly sectors complementary to oil and gas.

“One of the most critical components of the development and near-term prospect of the oil and gas industry in Guyana is the availability of infrastructure to support its growth.”

With this in mind, the World Bank has moved to support the country as it seeks to equip itself with the tools needed to handle the management of its new-found resource wealth.

In March 2019, it pledged $20m to help Guyana prepare its oil and gas industry for the impending boom in business activity, including the development of legal frameworks, key institutions, financial management and project management.

This added to a $35m credit arrangement in 2018 intended to reinforce the country’s financial and wealth management sectors ahead of the new demands that will be placed on its fiscal policy, long-term savings strategy and domestic investments.

More practical considerations for developing the country’s oil and gas industry include the size and skillset of the Guyanese talent pool, the lack of a deep water port along its coastline, and the limitations of its road networks and power grid infrastructure.

Lara adds: “Guyana today has an extraordinary opportunity, from oil revenues, to reduce poverty and bring long-term benefits to its people.

“How the government can deal with the oil revenue will be determinant of the future of Guyana’s economy. Nonetheless, the initial outcome will likely be positive, with more jobs to be created in the oil sector and related services.”

Exxon says more than 50% of its current workforce in Guyana is made up of local people – creating 1,700 jobs in the region – with around $180m having been spent with Guyanese businesses since 2015.

Coronavirus and the oil crisis have clouded the picture

Global events since the start of 2020 – the spread of the coronavirus pandemic and the ensuing oil market collapse that sent crude oil prices falling to their lowest levels in decades – will undoubtedly disrupt Guyana’s transformation from “frontier” oil minnow to significant exporting nation.

Operators around the world are searching for ways to cut costs in the face of unprecedented market dangers and uncertainty, with capital investment in new, potentially risky, exploration projects the first to be axed.

Exxon has announced plans to reduce its capital investment plans by 30% throughout 2020 – down from $33bn to $23bn – following in the footsteps of Royal Dutch Shell, BP and Chevron which have all confirmed significant cutbacks of their own.

The importance that Guyana has acquired within the oil firm’s portfolio means the Stabroek development will unlikely be among the “at-risk” projects, however, even if the timetable for developing the nation’s resources gets pushed back.

In a statement, Exxon confirmed operations in Guyana remain “integral” to its plans, with operations aboard its Liza Destiny production vessel to be unaffected, while the second phase of its development of the Liza oilfield remains on targets to come online in 2022.

Some other activities in the country could be delayed by up to 12 months, however, as the stalled government elections add to existing market uncertainty.

Final investment decisions and project assessments may well be put off until there is more certainty in the market – but it will be the financial health and operational appetite of these big oil producers as they emerge from the crisis that truly determines the pace and trajectory of Guyana’s transformation into a major oil economy.