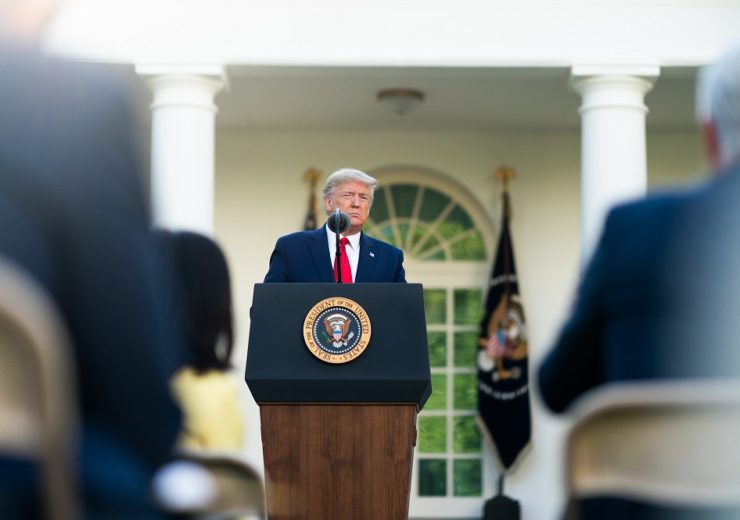 US President Donald Trump claims a deal to end the price war between Saudi Arabia and Russia could be struck within the next few days (Credit: White House/D Myles Cullen)

Embattled oil markets have rallied today (2 April) on remarks from President Donald Trump that an end might be in sight for the Saudi-Russian stand-off that has sent crude prices plummeting in the past month.

Speaking at a White House press briefing, the president said the two countries had been negotiating, and he believes a deal is likely within the “next few days”.

Crude oil prices — which have been in freefall since a failed Opec+ meeting last month to agree production cuts in the face of coronavirus-weakened demand, and the subsequent price war waged by Riyadh and Moscow — surged on the president’s remarks, with both Brent crude and West Texas International up more than 20% in the day’s trading.

In a Twitter update, Trump said he had spoken with Saudi Arabia’s Crown Prince Mohammed bin Salman and was hopeful of an agreement between the respective leaders to cut oil production by up to 15 million barrels per day (bpd).

He wrote: “Just spoke to my friend MBS (Crown Prince) of Saudi Arabia, who spoke with President Putin of Russia, & I expect & hope that they will be cutting back approximately 10 Million Barrels, and maybe substantially more.

Just spoke to my friend MBS (Crown Prince) of Saudi Arabia, who spoke with President Putin of Russia, & I expect & hope that they will be cutting back approximately 10 Million Barrels, and maybe substantially more which, if it happens, will be GREAT for the oil & gas industry!

…..Could be as high as 15 Million Barrels. Good (GREAT) news for everyone!

Via its state news service, Saudi Arabia confirmed it would seek a an “urgent” assembly of the Opec+ alliance – and notably “other countries” – to discuss potential measures to address the market crisis.

It said in a statement: “Today, the kingdom calls for an urgent meeting for Opec+ group and other countries, with aim of reaching a fair agreement to restore the desired balance of oil markets.

“This invitation comes within [the] framework of the kingdom’s constant efforts to support the global economy in this exceptional circumstance, and in appreciation of President Donald Trump of the United States of America’s request and the US friends’ request.”

Despite the renewed market optimism, crude oil prices remain around the sub-$30 per barrel range – their lowest for years and well below the break-even level for most producers.

A production binge among Opec members had been expected to begin this month as the existing cutback agreement expired on 31 March.

Just yesterday, state-backed Saudi Aramco boasted of a “record-breaking” effort to stockpile 15 tankers with more than 18.8 million barrels of oil ready for shipment.

But President Trump talked up the chances of a de-escalation in the price war, saying his recent conversations with Russian president Vladimir Putin and Saudi Crown Prince Mohammed bin Salman had led him to believe they would “make a deal in the not too distant future, because it’s very bad [for both countries]”.

He added: “We have a great oil industry and the oil industry’s being ravaged. I think [Russia and Saudi Arabia] will work it out over the next few days. It’s too simple not to be able to — they both know what they have to do. I have confidence in both that they will be able to work it out.

“They’re talking, and I think they’ll come up with something.”

The US leader also confirmed he would hold meetings with his country’s top oil executives later this week, amid troubling time for the US shale industry which has emerged as a prime casualty of the deteriorating price environment.

There have been strong calls from both industry and politicians for an intervention to protect US oil interests, with the warnings from analysts about the likelihood of insolvencies realised yesterday as Denver-based Whiting Petroleum filed for Chapter 11 bankruptcy protection.

President Trump said: “We don’t want to lose our great oil companies. We’re the number one producer in the world — a month ago when you said that it was great, but today it’s not so meaningful.

“But there’s a way that can be pretty well solved. I think I know what to do to solve it.”

Reporting by the Wall Street Journal suggests the meetings scheduled with US oil firms will discuss the possibility of imposing tariffs on Saudi crude oil, which Riyadh has been offering to global markets at a heavily-discounted price since the stand-off with Russia began.