How will the Saudi-Russia stand-off unfold after Opec’s failed coronavirus plan?

After stock markets nosedived on news that Opec+ talks to cushion the impact of coronavirus had collapsed, we take a closer look at the potential fall-out 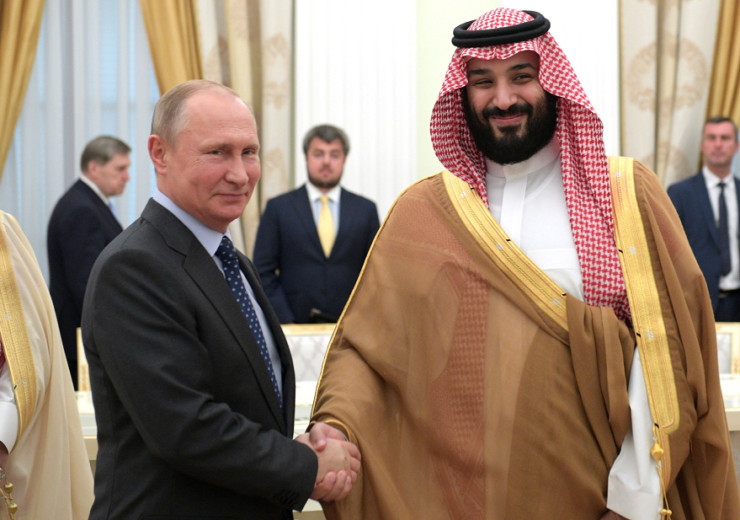 Saudi Arabia and Russia have embarked on an oil price war after a breakdown in Opec+ relations (Credit: Kremlin)

The breakdown of discussions at the latest meeting of Opec and its allies, in which efforts were made to bolster oil markets against the growing impact of coronavirus, sent shockwaves throughout global industry and finance. Here we take a look at some of the key issues and repercussions of failed negotiations that sparked an oil price crash and brought turmoil to global stock exchanges.

The fall-out from last week’s collapsed Opec+ negotiations continues to rumble on, with subdued crude oil prices, threats of a global supply glut and uncertainty wreaking havoc across financial markets.

Having failed to agree on new measures to cut global production amid coronavirus-weakened demand, Russia and Saudi Arabia now stand on opposite sides of a price war — with the latter threatening to escalate the situation further by raising production and flooding the market with heavily-discounted crude oil.

Latest reports suggest Riyadh is poised to increase its crude output by 2.5 million barrels per day (bpd) to 12.3 million bpd next month, once the existing Opec agreement to control production expires.

The row raises doubts over the future of the Opec+ alliance, in which non-Opec members led by Russia have co-ordinated with the cartel to control oil prices and supply since 2016.

Major financial markets reacted dramatically to the situation yesterday (9 March), with value wiped from prominent share indices around the world, including Nasdaq, S&P 500, Dow Jones Industrial Average and the FTSE 100.

Big oil companies were particularly hard hit by the sell-off, as investors scrambled to offload assets in an industry beset by uncertainty and struggling to cope with the impact of coronavirus.

The world is now paying close attention to how relations between the two nations unfold in the coming months, and what impact the price war could have on global oil markets.

Russia, she believes, felt “cornered” by Opec’s decision to agree the cuts a day before Moscow had a chance to weigh in on the negotiations, and was left with a “political” choice about whether or not to involve itself in an arrangement in which it had no input.

“I’m not sure that Saudi Arabia or anybody else thought the Russians were going to walk away given the economic stakes, but at the same time the political impact was a little bit forgotten,” she says.

“That is, for Russia to step into a deal in which it had basically no part in making, nor was considered as part of the decision-making process.”

In Vienna last week, Opec recommended a fresh batch of production cuts to the tune of 1.5 million bpd — as well as an extension of existing cuts of 2.1 million bpd until the end of the year — in a bid to bolster the market amid slowing global demand.

There will be ‘no winners’ in this oil price war

But the “high economic stakes” for both countries is something that could sooner or later bring them back to the negotiating table, perhaps even by the next scheduled Opec meeting in June.

“There will be no winner in this price war — only losers,” adds Rodriguez-Masiu.

“You could argue that Saudi Arabia is a bit better equipped to withstand this because it has higher capacity — so it can bring more production online faster and at a more compensated price compared to the Russians.

“But at the same time, in terms of fiscal budgets, Russia has prepared for a fiscal break-even of $30 per barrel, whereas the Saudi one is much higher.”

She adds that plans put in place by Saudi leader Crown Prince Mohammed bin Salman to diversify and modernise the country’s economy, the Saudi Vision 2030 project, hinge on its ability to reduce dependence on its vast oil reserves — a scheme that requires capital and could be damaged by a prolonged game of brinksmanship with Russia.

GlobalData oil and gas analyst Will Scargill agrees that Riyadh’s decision to wage a price war is a “risky strategy” and one that could take “months” to play out.

He adds: “In reality, the brunt of the previous Opec+ production cuts was borne by Opec members — and Saudi Arabia more specifically — with Russia not implementing significant cuts.

“It appears unlikely that Russia will allow itself to be forced into them now in response to the reduced demand caused by coronavirus.”

Price crash different to those that came before

In the meantime, crude prices appear set to remain low — currently settled at around $35 per barrel, compared to around $50 before last week’s meeting and $70 at the start of the year.

It is the sharpest collapse oil markets have experienced since the financial crisis of 2008, although Rodriguez-Masiu points out there are important distinctions between the two that hint at shorter-term disruption this time around.

She says: “The previous collapse was because of underlying structural problems in the economy that were hard to address.

“This time it is a product of demand shock caused by the coronavirus, and the subsequent attempt of Opec to respond causing a production shock.”

By the time of the next Opec meeting in June, she says, the coronavirus picture could be much less clouded, making it “likely” both sides would be in a better position to negotiate a new deal.

Resilient US shale a ‘monster that can’t be killed’

Many onlookers have suggested Russia’s decision to back out of the Opec+ deal was in part motivated by a desire to take on US shale oil, which has washed the market with cheap supplies in recent years.

But while “the effect of the price drop will certainly be seen on US shale producers in the coming months”, according to Scargill, a longer-term view must take into account the past evidence of US shale’s powers of recovery following previous price crashes.

Rodriguez-Masiu agrees, pointing out that both Moscow and Riyadh will be well-aware that even if there is some near-term pain, the resilience of US shale prices will likely see a quick rebound once the current pressure eases.

She adds: “Shale is a monster that you cannot kill, you can only slow it down.

“It’s true that falling crude prices are going to hurt a lot of producers in the US, but the cycles have shortened and once prices rebound — which we expect will happen probably in the second half of the year or in 2021 — then shale will come back.”