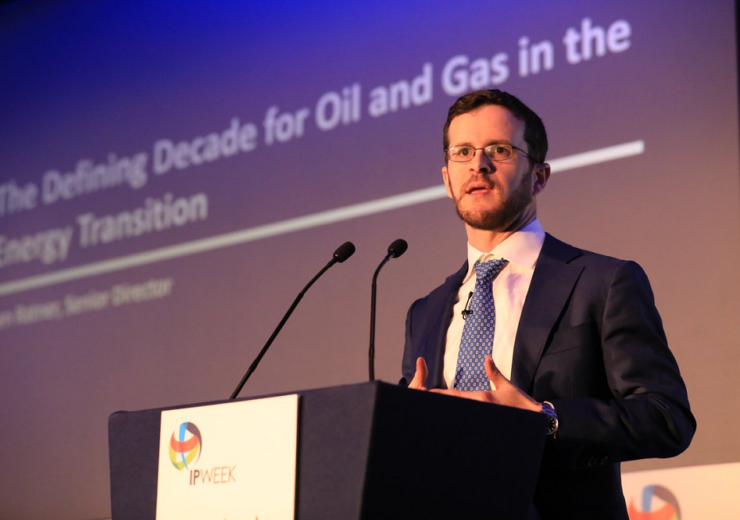 At London’s IP Week, senior director for the Environmental Defense Fund’s business energy transition team, Ben Ratner, took to the stage to address oil and gas delegates on what he sees as a “defining decade” for the future of the industry. Andrew Fawthrop was in the audience for NS Energy to hear what he had to say.

When new BP boss Bernard Looney announced last month he would oversee the oil major’s transition to net zero by 2050, he credited consultation with the Environmental Defense Fund (EDF) as a key influence in shaping his decision.

The US-based advocacy group has established itself as a prominent voice in the ear of major companies around the world — advising on a range of sustainability issues, as well as how to maximise opportunities presented by the response to climate change.

For the oil and gas industry, in particular, it says the next 10 years will be critical for executives, who will need to make tough decisions that will come to define the long-term success or failure of their organisations.

“Business-as-usual for the oil and gas industry is over,” EDF senior director Ben Ratner announces to a room packed with industry delegates at London’s IP Week.

“The defining decade has arrived. This is the decade in which the decisions energy executives make will define their companies’ future viability, and shape the standing of the entire industry on which every company in the value chain depends.”

The subject of climate change is, without doubt, working its way up corporate agendas with greater urgency than ever before. Several significant developments, even since the turn of the year, emphasising the fact that the oil and gas industry must sit up and take notice, or risk both financial and reputational damage.

“Financial analyst Jim Cramer goes on live TV and goes so far as to declare fossil fuel stocks dead. Not because they are not paying dividends, but because an increasing group of investors are unwilling to tolerate the environmental and social costs that come with those dividends.

Ratner tells industry to think of renewables as ‘core growth’

While some sections of the environmental movement call for an immediate end to all fossil fuel activity and the companies associated with it, Ratner says his goal, and the goal of his organisation, is to work alongside industry and policymakers as a partner to support them transition to a low-carbon economy.

Citing International Energy Agency data showing oil and gas firms currently only direct about 1% of their capital expenditure into “non-core” areas — effectively meaning renewables and clean technology — he tells the delegates to instead think of these business segments as “core growth”.

He adds: “Whatever we disagree on, I think there’s common ground that oil and gas is not going to have a massive growth trajectory.

“We can discuss and debate when peak oil is going to be, but massive growth is not on the horizon. However, we have already seen a massive hockey-stick adoption in electrification and renewables.”

Measurable goals and advocacy for climate policy are key to progress

Four pillars make up this strategy for transforming the face of the oil and gas industry: commitment to ambitious goals, support for science-based climate policy, collaboration to achieve results at scale, and innovation.

Ratner says the first step for any company is to set measurable and ambitious targets in line with the Paris Agreement, while putting pressure on governments and regulators for policies that reward environmental performance.

“Conventional wisdom has taught us that what gets measured gets managed,” he says.

“We face a systems problem that requires a systems approach to deliver a systems solution. Any serious set of climate goals must include Scope 3 emissions — they should be at priority level one.

“Net zero by 2050 is an ambition, but it’s a distant point on the horizon to steer the ship towards.

“The medium tenure for an oil and gas CEO is about four and a half years, so long-term ambitions must be backed by interim targets that help drive actual plans, and I would encourage you to include measurable goals for 2025 and 2030.

“Change this big requires government and business to work together. I know that stricter environmental regulation doesn’t come easily for many people in the industry, but times are changing, and there are good business reasons to make seeking strong climate policies a part of your business as usual.

“Well-designed policies send signals for innovation — they reward environmental performance and make it easier for companies to turn that big ship and achieve their goals cost-effectively with the support of government and other stakeholders.

“When I talk to investors I hear their growing appreciation not just of the essential role of ambitious government action but of the influential and important duty of companies to engage and support governments in stepping up.

“If industry can unlock the same innovation above ground as it has below ground in the last century, this defining decade could well be yours.

“In an era that’s fluid and competitive, all companies must put their innovation agenda front and centre because the opportunity is that great and it’s what customers, investors, employees and civil society demand.”