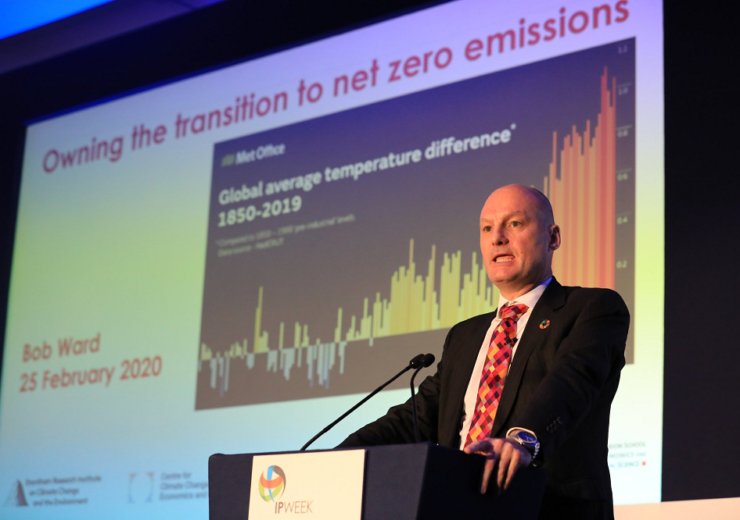 The oil and gas industry is “investing in its own destruction” if it continues to direct the vast majority of capital expenditure into new fossil fuel projects, a senior academic researcher has warned.

Bob Ward, a policy director at the London School of Economics’ Grantham Institute on Climate Change and the Environment, was addressing industry delegates at the IP Week conference in London yesterday, and pulled no punches in demanding greater “urgency” to reduce global emissions.

Also speaking was Edward Mason from the Church Commissioners of England investment fund, who emphasised the “unprecedented” levels of investor mobilisation in support of climate change goals, warning that energy companies need to “get on board” or risk losing critical financing support.

Responding to International Energy Agency (IEA) data showing oil and gas firms have been spending as much as 99% of their capital budgets on “core” fossil fuel assets, Ward warned they were going against the “direction of travel” of policy as governments around the world set net-zero emissions targets.

He said: “At the moment the oil and gas sector is investing less than 1% of its capital spending in alternatives to fossil fuels.

“That looks to me like sector that’s investing in its own obsolescence and destruction. There’s nothing in the projections that would lead you to believe that investing 99% of your capital in continued oil and gas production is a sensible way forward.

The Grantham Institute researcher told industry delegates they have an opportunity to “own the transition” to a net-zero world, and that their social licence to operate depends on it.

“The vast majority of the world’s greenhouse gas emissions are due to energy consumption, and more than 80% of energy is generated from fossil fuels – so this is your job,” he said.

“You can’t expect the environmental movement ever to love you – but this is really about your social licence as far as everybody else is concerned.

“The oil and gas industry has a track record of dragging its feet on this issue. There are those within the industry who have in the past, and continue to promote climate change denial – and every time they do so it damages the reputation of the whole industry.

“I know many graduates are thinking about whether this is the kind of industry they want to work in. So if you want to continue to have a stream of good talent coming through you’re going to have to show that you are serious and that you own this transition.”

One of the ways it can do this, Ward said – and avoid passing “critical thresholds” of global warming beyond which the environmental consequences would be “severe” – is to advance to development of carbon capture and storage (CCS) technology.

He added: “You have the knowledge to make storage happen. We’re going to need it. We cannot wait for the government before you make those investments, you have got to work harder to promote this as an essential technology.”

From a financing perspective, the Church Commissioners of England head of responsible investment raised the spectre of the divestment movement, which has in recent months gathered pace as key lending institutions such as BlackRock commit to ending support for fossil fuels.

The fund is the third-largest charitable endowment in the UK, controlling £8.2bn ($10.6bn) in assets, and has recently set its focus on engagement with the Climate Action 100+ scheme, which, thanks to BlackRock’s recent involvement, oversees investment of more than $40tn.

Mason said: “Investor expectations across this initiative are coalescing around net-zero 2050 – and it’s wonderful to see oil and gas companies starting to embrace that, with Repsol in December and BP just this month.

“We want to see change. We do not want to divest from companies in this industry. We will strain every sinew to help you become part of the solution for climate change.

“But that means getting on board with net-zero emissions and embracing the transition with the urgency that it requires.

“We will ultimately divest from any company that’s not on board with this because it’s ethically and financially unacceptable to us because the rest of our portfolio will be damaged by the impact that two degrees [global warming] would bring.”