A £1.2m funding drive has been launched to save the Swansea Bay Tidal Lagoon, after the UK government withdrew its support for the hydropower project 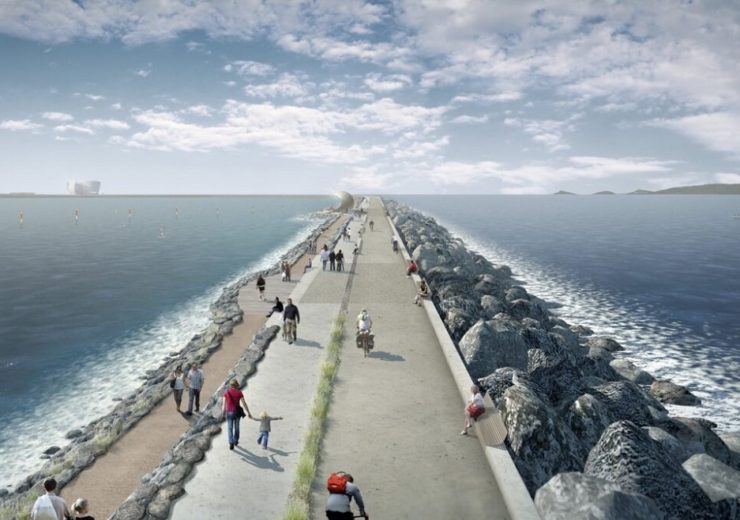 The Swansea Bay Tidal Lagoon was commissioned in 2016, only for government support to be later withdrawn (Credit: Tidal Lagoon Power)

A last-ditch attempt is being made to resurrect the stalled Swansea Bay Tidal Lagoon hydropower project in South Wales, UK.

A funding drive targeting high net worth individuals and private corporate investors has been launched, with the goal of raising the £1.2m ($1.57m) needed to secure planning permission for the facility “in perpetuity”.

First conceived in 2011, the unique hydroelectric power project was commissioned by the UK government in 2016 under former Conservative Prime Minister David Cameron – but support was later rescinded by his successor Theresa May due to concerns over cost.

Tidal Lagoon Power (TLP), the company which has spearheaded the project in Swansea, now has three months in which to complete the preliminary work necessary to ensure existing planning consent is not revoked.

If successful, it would secure “evergreen” status for a venture the company says will “retain for the UK the option of tidal power at scale, when the political climate allows”.

TLP chief executive Mark Shorrock said: “With the increased awareness of the climate emergency, the rationale to deliver lagoons is stronger than ever.

“However, we must first remove the cliff-edge from Swansea Bay Tidal Lagoon’s planning permission.

“No amount of political will can resurrect this vital pathfinder project if the planning permission is allowed to lapse.

“That is why we’ve launched our new fundraise today – by raising a relatively modest sum we can retain for the UK the option of large-scale, multi-generational tidal power.”

The energy transition is fast becoming a central pillar of political discourse in the UK ahead of the general election on 12 December – and the Labour Party, along with Wales’ Plaid Cymru, have made specific manifesto pledges to resuscitate and deliver the tidal lagoon project if elected.

The investment targeted by the fundraise is the amount required to cover the legal and administrative costs of securing future planning consent, giving the developers breathing room with which to get the tidal power facility back on track.

In June 2018, government ministers threw out the plans to build the facility, saying the £1.3bn ($1.7bn) required in development costs did not represent good value for money compared to nuclear power or offshore wind.

Instead, favour was given to subsidising the Hinkley Point C nuclear reactor in Somerset, England due to a lower cost of energy breakdown.

In September this year it was confirmed the nuclear power plant being built by French energy firm EDF is now running £3bn ($3.9bn) over budget.

The Swansea Bay project is envisioned as the first-of-a-kind development in a fleet of six tidal lagoons around the UK coastline – which it is claimed could meet up to 8% of UK electricity demand with a clean, renewable and predictable source of energy, powering up to 30% of households in the country.

Tidal Lagoon Power says the facility provides a “scalable blueprint” that would enable the long-term delivery of a tidal lagoon power infrastructure benefitting from the time and cost benefits of replicating the design in series.

The company website explains: “A tidal lagoon is a ‘U’ shaped breakwater, built out from the coast which has a bank of hydro turbines in it.

“Water fills up and empties the man-made lagoon as the tides rise and fall. We generate electricity on both the incoming and outgoing tides – four times a day, every day.”

The hydropower plant would have an estimated capacity of 320 megawatts, generated by a series of 16 turbines measuring 7.2 metres in diameter, positioned along the 9.5 kilometre breakwater wall in the bay.