UK election 2019: What the manifestos say about energy and climate policies

Labour is planning to kick-start a "green industrial revolution" if elected, with the Conservative Party setting out policies to fight climate change 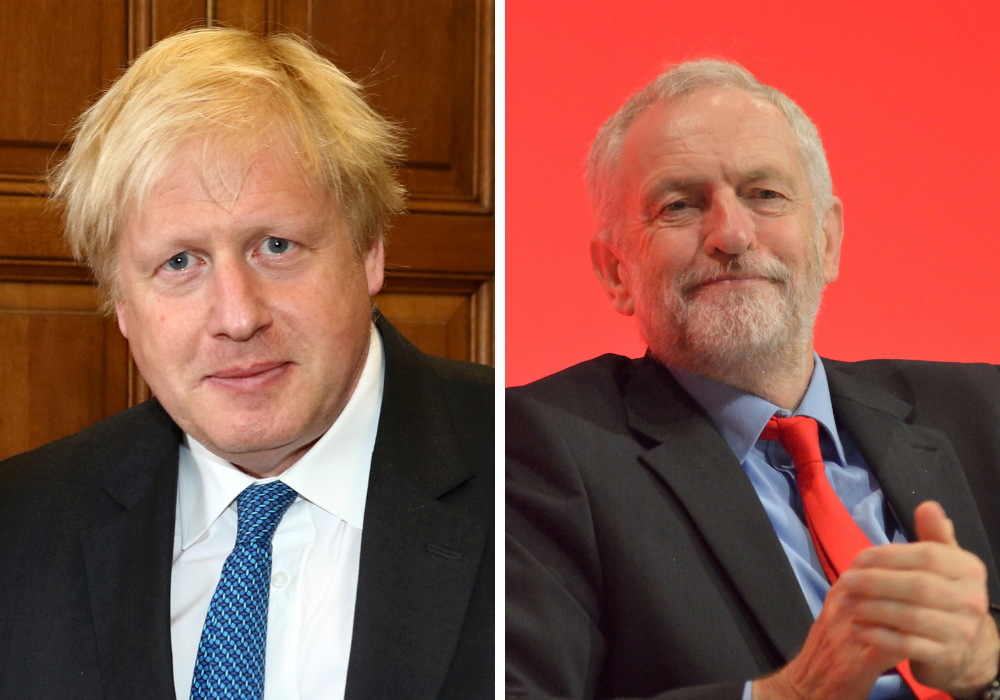 With the global economy making steps towards cleaner energy, environmental pledges play a key role in manifestos for the 2019 UK general election.

In July, Britain became the first nation to propose a target of achieving net-zero greenhouse gas emissions by 2050 – stepping up its efforts following a previous goal to reduce its carbon footprint by 80% in the same time frame.

Some parties have focused heavily on the electricity grid, with others viewing electric vehicles as an integral part of the country’s future economy.

Labour has laid out a 16-page section on how it will start a “green industrial revolution”, while the Conservatives’ manifesto – which is half the size – includes a single page on how it aims to “fight climate change and protect the environment”.

Here is how each party aims to tackle these crucial energy policies.

Environmental policies in the 2019 election manifestos

There is a huge emphasis to deliver on the 2015 Paris Agreement.

The landmark treaty was signed by representatives of 196 countries and aims to cap the rise in global temperature at “well below” 2C compared to pre-industrial levels, with less than 1.5C being the ideal scenario.

The Intergovernmental Panel on Climate Change claims global emissions need to be cut in half by 2030 to “have a chance of keeping global heating within safe limits”.

Each of the major parties have set out how they intend to tackle impacts on a changing environment.

Labour says it will develop the 30 recommendations of its 30 by 2030 report, aiming to put the UK on track for a net-zero carbon energy system within the 2030s.

The party added that the UK needs to “act now and decisively” to keep global heating within safe limits outlined in the Paris Agreement.

It has pledged to start a “green industrial revolution” and introduce a Climate and Environment Emergency Bill that will set out in law “robust, binding new standards for decarbonisation, nature recovery, environmental quality and habitats and species protection”.

In terms of the green economy, Labour says it will create one million jobs in the UK to “transform” industry, energy, transport, agriculture and the country’s buildings, while restoring nature.

The Conservative Party says it will “lead the global fight against climate change” and deliver on the net zero target by 2050.

Boris Johnson’s party claims to have already doubled International Climate Finance – although not giving any figures to back this up – and says it will use the country’s position in hosting the UN Climate Change Summit in Glasgow next year to ask global partners to match this ambition.

The Tories believe free markets, innovation and prosperity can protect the planet and, over the next decade, plans to work with the market to deliver two million new “high-quality” jobs in clean growth.

But there was no mention in the manifesto on the Climate Change Act or the 1.5C target.

The SNP says it will “demand the UK accelerates its action to meet Scotland’s climate change targets”, of a 75% reduction in emissions by 2035, net zero-carbon emissions no later than 2040 and become net zero of all emissions by 2045.

The party, which has 35 seats in Parliament, claims these are the toughest legal targets in the world for reducing emissions.

The Liberal Democrats aims to deliver a 10-year emergency programme to “cut greenhouse gas emissions substantially straightaway and phase out emissions from the remaining hard-to-treat sectors by 2045 at the latest”.

The Green Party says its “Green New Deal” will “get the UK on track to reducing climate emissions to net zero by 2030”.

Renewable energy is a tool being used to harness a move towards greener energy, with the UK being a world leader in the offshore wind industry.

Solar and wind farms are growing ever-popular, so a clear path to how the country will continue its growth in the sector is important.

Jeremy Corbyn’s party says it will deliver nearly 90% of electricity and 50% of heat from renewable and low-carbon sources by 2030.

It plans to establish a Foundation Industries Sector Council to provide a clean and long-term future for existing heavy industries like steel and glass.

The party also says it will fund R&D into newer technologies like hydrogen, carbon capture and energy storage.

Labour says a new UK National Energy Agency will own and maintain the national grid infrastructure and oversee the delivery of decarbonisation targets.

To balance the grid, it plans to expand power storage and invest in grid enhancements and interconnectors.

The Tories say the UK’s offshore wind industry output will reach 40 gigawatts (GW) by 2030 and that it will enable new floating wind farms.

The party plans to invest £800m ($1bn) to build the first fully-deployed carbon capture and storage cluster by the mid-2020s.

The Conservatives’ manifesto says that, in its first budget, it will prioritise the environment by investing in R&D and decarbonisation schemes.

But there is no mention of plans for the electricity grid.

The SNP claims it has doubled Scotland’s exports of renewable electricity to the rest of the UK and is investing over £10m ($12.9m) in the marine energy sector and tidal innovation, as well as developing a bioenergy action plan through “cutting-edge” research.

The Lib Dems plan to “accelerate the deployment of renewable power” by providing more funding, as well as build more interconnectors to guarantee the security of supply and aim to reach “at least” 80% renewable electricity in the UK by 2030.

The Green Party says it will introduce new support and incentives to “directly accelerate wind energy development, paving the way for wind to provide around 70% of the UK’s electricity by 2030”.

Oil and gas energy policies in the 2019 election manifestos

The North Sea oil and gas industry is synonymous with Europe’s reliance on fossil fuels – but it could play a key role in moving to clean energy.

There are other contentious issues that the political parties will be looking to iron out after the election, such as nuclear, fossil fuels and fracking.

The Labour Party manifesto says: “The Conservatives allowed the proceeds of North Sea oil to be squandered on tax cuts for the richest and captured in profits for the few, instead of investing them in our future.

“We now stand at an even greater crossroads in the development of our national economy.”

If elected, Labour says it will ensure the green future will be “owned by all of us”.

Corbyn plans to introduce a windfall tax on oil companies so the businesses that the party claims “knowingly damaged our climate” will help cover the costs.

Labour is also looking to provide a strategy to “safeguard the people, jobs and skills that depend on the offshore oil and gas industry”.

The party says it will build new nuclear power needed for energy security, but will immediately and permanently ban fracking.

The Conservatives believe the North Sea oil and gas industry has a “long future ahead” and say it “knows the sector has a key role to play as we move to a net-zero economy” and it will “support this transition” in the next Parliament with a transformational sector deal.

It says the industry employs almost 300,000 people, of which four in 10 works in Scotland.

The Tories will not support fracking “unless the science shows categorically that it can be done safely”.

The party will support gas for hydrogen production and nuclear energy, including fusion, as important parts of the energy system.

The SNP says that, “because the communities that currently host the oil and gas industry cannot be left behind in the transition,” it will demand that 12% of the fund – at least £1bn ($1.3bn) over five years – will go to a “Net Zero Industrial Strategy” to help diversify the economies of oil hubs like Aberdeen, Falkirk and the Shetland Islands.

The Lib Dems intend to ban fracking “because of its negative impacts on climate change, the energy mix and the local environment”.

The Green Party says it will prohibit the construction of nuclear power stations.

Transport policies in the 2019 election manifestos

Transport is a key tool to a number of countries as they look to reduce emissions and move to cleaner energy, with electric vehicles set to play an important role in the future.

In the UK, topical issues for the general election surround when petrol and diesel vehicles will be taken off the road, as well as action taken against aviation and a definitive answer on the Heathrow third runway expansion.

Labour says it will position the UK at the forefront of the development and manufacturing of ultra-low emission vehicles (ULEVs) and will “support their sale”.

It plans to invest in electric vehicle charging infrastructure and in electric community car clubs, as well as accelerate the transition of public sector car fleets and public buses to zero-emissions vehicles.

The party is aiming to remove combustion engine vehicles from the roads by 2030.

In terms of aviation, Labour says it will examine fiscal and regulatory options to “ensure a response to the climate crisis in a way that is fair to consumers and protects the economy”.

But for the third runway at Heathrow, it added the expansion of airports “must pass our tests on air quality, noise pollution, climate change obligations and countrywide benefits”.

On becoming prime minister, Johnson laid out his vision for the UK to become the home of electric vehicles.

The Conservatives will provide funding for electric vehicle infrastructure, including a national plug-in network and “gigafactory” – a plant that makes lithium-ion batteries with an annual output in the gigawatt-hours.

It plans to consult on the earliest date possible to phase out the sale of new conventional petrol and diesel cars – which are currently due to be banned from 2040.

The Conservatives say the Heathrow project is up to the private sector and will receive no extra funding.

Additionally, the airport must “demonstrate that it can meet its air quality and noise obligations, that the project can be financed and built, and that the business case is realistic”.

But the party says it intends to build on Britain’s “pioneering work” in electric and low-carbon flight.

The SNP says it will campaign for the UK government to bring forward plans to move to electric vehicles to match the Scottish target for banning new fossil fuel-powered vehicles by 2032.

It claims to be “committed to helping people with the cost of ULEVs, including second-hand cars, by providing an additional £17m ($22m) for loan funding”.

The Lib Dems plan to accelerate “the rapid take-up of electric vehicles” by reforming vehicle taxation, cutting VAT on EVs to 5% and increasing the rate of charging point installation, including residential on-street points and ultra-fast chargers at service stations.