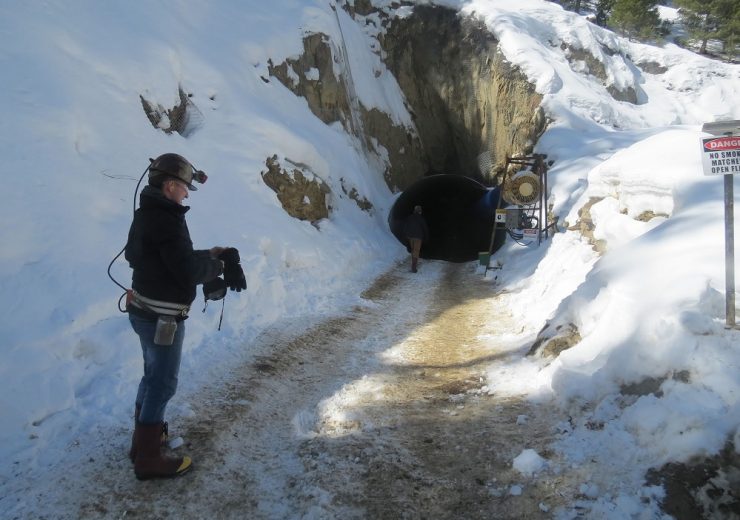 First Cobalt CEO Trent Mell at the entrance to the Iron Creek mine (Credit: First Cobalt)

First Cobalt has launched a $2.5m exploration programme at its Iron Creek project in Idaho, US, seeking to double the size of a resource that is hoped can supply the country’s growing electric vehicle market.

The company will undertake new drilling over 4,500 metres as well as geophysical assessments of the site during the next two drilling seasons, to determine the extent of potential additional resource.

Drilling will explore the eastern and western extensions of the existing 900-metre strike extent, as well as other nearby zones to identify potential new areas of mineralisation.

As the US targets a 50% economy-wide emissions reduction by the end of this decade, it will need to scale up its supply chains for minerals like cobalt that will be used to manufacture batteries and other clean energy technologies.

But with the country currently heavily-reliant on foreign imports of these products, sourcing more supplies domestically has become a priority issue for the federal government.

“Cobalt demand for electric vehicles is projected to increase more than 250% by 2025, and Idaho is believed to be America’s best opportunity to develop a domestic supply of this critical mineral,” said First Cobalt chief executive Trent Mell.

“The Biden administration has made several announcements that support domestic mining of critical minerals such as cobalt in order to secure and shorten America’s supply chains. First Cobalt and our Idaho mineral assets are extremely well-positioned to support the administration’s ambitions in these areas.

“Our Iron Creek assets can help the US on two of its most important policy files: reducing climate change and securing critical minerals for American industry.”

In a partnership with Glencore, First Cobalt is developing a cobalt refinery north of Toronto, Canada, which it hopes will become central to North American efforts to diversify a global cobalt supply chain currently dominated by Chinese producers.

Cobalt is predominately extracted from the Democratic Republic of Congo (DRC), which holds more than half the world’s cobalt reserves, and Chinese manufacturers have established a strong hold over these supplies.

The First Cobalt refinery is expected to be operational in 2022, capable of producing 25,000 tonnes of battery-grade cobalt sulfate annually, representing more than 5% of all global cobalt production.