Consensus between Russia, Saudi Arabia and the US over joint measures to curb global crude production will be critical to the emergency summits 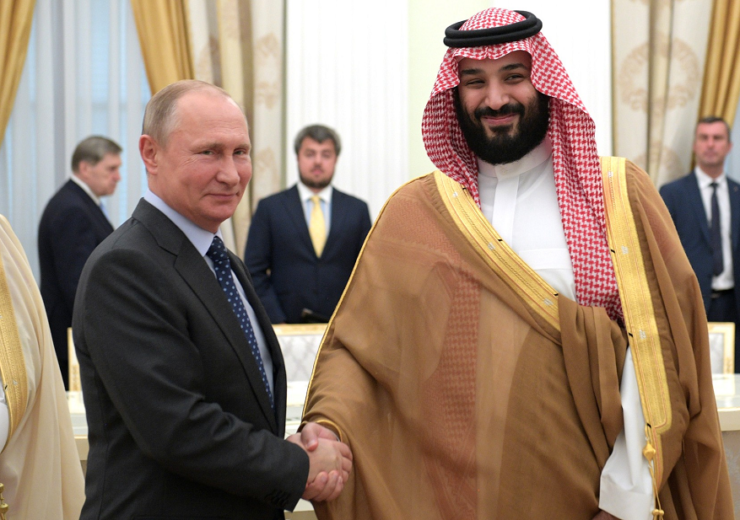 Crunch talks this week could bring an end to the Saudi-Russian price war that has sent shockwaves through world oil markets (Credit: Kremlin)

The expectant eyes of a struggling energy industry will be fixed firmly on two landmark meetings of world leaders this week – crisis talks between members of the Opec+ alliance on Thursday (9 April) and a summit of G20 oil ministers the following day.

While ostensibly based in Vienna and Riyadh respectively, both sets of talks will be conducted virtually – a clear reminder of the coronavirus backdrop against which the emergency assemblies have been hastily arranged.

The spread and severity of the pandemic has decimated global oil demand as economic activity grinds to a standstill amid lockdown precautions, while the failure of Opec+ to agree a response to the crisis last month triggered a price war between Russia and Saudi Arabia that has intensified market pressures ever since and sent commodity prices into freefall.

Energy ministers will hope to agree on measures to arrest the unfolding oil crisis during these meetings, but huge uncertainty remains as to how countries will approach the negotiations and whether a compromise agreeable to all parties can be found.

Dynamic between Saudi Arabia, Russia and the US will be decisive to outcome of oil crisis meetings

Crude prices dipped to their lowest in decades during March, and the damage dealt to the industry worldwide as share prices and spending budgets have been slashed in equal measure was enough to bring the world’s biggest oil-producing nations to the negotiating table.

Last week, US President Donald Trump teased the potential for an imminent end to the price war that has “ravaged” oil markets, suggesting his intervention had brought Saudi and Russian leaders close to an agreement that would see them cut back production by as much as 15 million bpd.

“I think [Russia and Saudi Arabia] will work it out,” he told a press conference. “It’s too simple not to be able to — they both know what they have to do. They’re talking, and I think they’ll come up with something.”

The Saudi leadership responded by calling an “urgent” meeting of Opec+ to discuss possible actions to defuse the turmoil enveloping oil markets – although intriguingly also floated the idea of “other countries” taking part in discussions too, meaning those not among the 23 members of the Opec+ alliance.

Pressure from the International Energy Agency (IEA) and Saudi Arabia – which currently holds the revolving presidency of the G20 intergovernmental forum – led to the arrangement of the second meeting of global energy leaders, scheduled for Friday (10 April).

The participation of countries like the US, Brazil and Canada in the discussions raises the prospect of a much broader international response to control oil production than has previously been the case with only Opec+ countries co-ordinating their efforts.

Co-operation from other producer nations will certainly change the global dynamic, but it will be the decisions of the big three – Russia, Saudi Arabia and the US – that define the response to the crisis.

Rumours have abounded this week over what the discussions will deliver, and on what terms these oil giants might agree to set aside their rivalries and work with one another to stabilise the embattled market.

An obvious intervention appears to be a collective agreement on production cuts – with both Russia and Saudi Arabia having indicated they would be open to such a measure, but only if they are joined by the US in curtailing oil output.

Whether or not President Trump would concede to mandating production targets to his friends in the US oil industry remains to be seen – he has already raised the alternative prospect of tariffs on foreign oil imports in a bid to safeguard the US industry.

US expected to bargain with ‘market-led’ production cuts

Latest data from the US Energy Information Administration (EIA) suggests US crude oil production is poised to contract in both 2020 and 2021 as the price crisis squeezes domestic industry and makes its exports less attractive to international consumers.

This “natural” market-led production decline may be what the US offers to the negotiations, as opposed to the official directive either Riyadh or Moscow would make – but this may not be a strong enough commitment for either Moscow or Riyadh to accept.

Reuters market analyst John Kemp says: “US officials will likely argue market-driven adjustments offer a different route to the same objective, respecting differences in the legal systems and organisation of the oil industry in different countries.

“Some Opec+ members are likely to be quietly sceptical, since the scale of market-driven output cuts is a function of prices, while formal output limits are independent of prices, at least in the short term.

Earlier this week Russian President Vladimir Putin emphasised his desire for a collective effort from nations to lower production levels “in a manner of partnership” – an indication that piecemeal commitments would not be enough.

“We are all concerned about the situation,” he told Russian energy leaders in phone call this week, referencing conversations he had held with both the Saudi and US administrations.

“We are all interested in joint, and let me emphasise, well-co-ordinated, actions for ensuring the long-term stability of the market. I consider it necessary to pool our efforts to balance the market and reduce production as a result of these concerted and well-co-ordinated efforts.”

While Saudi Arabia might stand accused of launching the price war – pledging to massively increase crude output and present it to global markets at a discount as it was released from pre-existing cutback agreements – it was the decision of Russia not to accept fresh Opec+ production cuts last month in response to the coronavirus outbreak that sparked Riyadh’s reaction.

Since then, Moscow has refused to back down from the game of brinksmanship, digging in for a protracted price war that many analysts believe it is better placed to survive than its rivals.

GlobalData oil and gas analyst Will Scargill explains that Russia’s industry is characterised by two important elements that make it “relatively resilient” to price shocks.

He says: “Its major taxes on oil producers – mineral extraction tax and exports duty – are directly linked to the oil price. Most of the impact of changes in the oil price is absorbed by changes in tax, offering protection to producers.

“This shifts the financial burden caused by the price crash onto the government budget, which has a longer time horizon and is better equipped to ride out market cycles.

“The other key factor is that Russian domestic producers’ costs are mainly denominated in Rubles – where value is closely linked to the oil price.

“As the oil price has dropped, the Ruble’s value has also fallen, leading to material cost reductions that can shield markets.

“The fact that the largest burden for Russia is on the state budget makes this [negotiation] in essence a political decision.

“The indications are that Russia’s participation in cuts will depend significantly on broad agreement, with significant concerns around the potential of the US shale sector to become a free rider as oil prices rise on the back of cuts from other producers.”

Analysis from research group Rystad Energy backs up the view that Russia goes into this week’s meetings holding the best cards, given the relative strength of its financial position to see out the disruption.

While Saudi Arabia might have an advantage in terms of its ability to quickly raise its oil production capacity and put other countries under supply pressure, its overwhelming reliance on oil revenues could prove a disadvantage.

Rystad estimates Saudi Arabia stands to lose $105bn in oil revenues this year in a $34 per barrel average price scenario, compared to Russia’s loss of $75bn.

Russia also holds the advantage of a much lower fiscal break-even price for its crude oil, as well as a stronger, more flexible balance sheet and an economy less dependent on crude oil revenues.

Notably, the flagship project of Saudi leader Crown Prince Mohammed bin Salman – the Saudi Vision 2030 scheme – to modernise the national economy hinges on the ability to leverage value from the kingdom’s vast oil reserves, and could be damaged by a lengthy market struggle.

Rystad’s head of analysis Per Magnus Nysveen adds: “Saudi Arabia certainly could have picked a better time for an oil-price war as the Covid-19 outbreak is already hammering global economies, including its own.

“At the moment, Russia can withstand the Covid-19 outbreak impact on demand and afford to wait.”