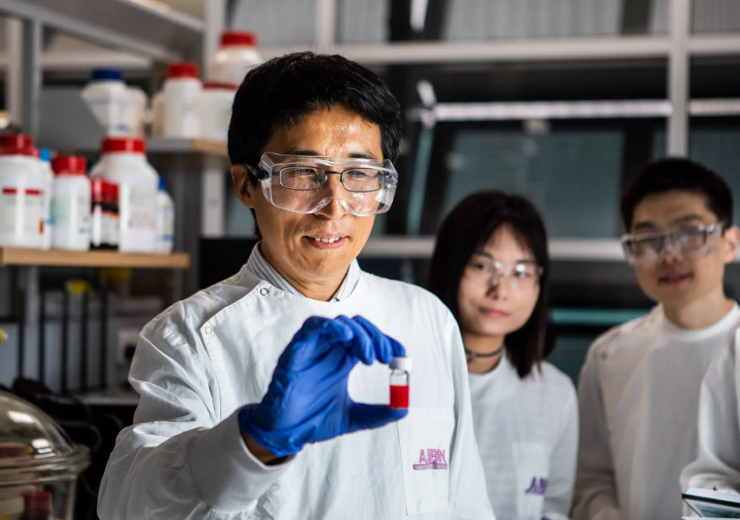 Professor Lianzhou Wang and his team have made a 'significant' breakthrough in quantum dot solar technology (Credit: University of Queensland)

Quantum dots could be poised to drive the “next generation” of solar power technology after scientists in Australia made a “significant breakthrough” in energy conversion.

The tiny nanoparticles were used to create flexible photovoltaic “skins” capable of being stretched over hard surfaces and converting light into electricity, even in dim conditions.

Researchers at the University of Queensland set a world record during their tests for the conversion of solar energy to electrical power — with the unique surface design proving highly effective at passing electrons between the quantum dots when exposed to light sources.

The material could become a commercially-viable alternative to “rigid and expensive” conventional solar panels, according to the team, and support global efforts towards a clean energy transition.

Professor Lianzhou Wang, who led the study, said: “The new class of quantum dots are flexible and printable. This opens up a huge range of potential applications, including the possibility to use it as a transparent skin to power cars, planes, homes and wearable technology.

“Eventually it could play a major part in meeting the United Nations’ goal to increase the share of renewables in the global energy mix.

“The near 25% improvement in efficiency we have achieved over the previous world record is important — it is effectively the difference between quantum dot solar cell technology being an exciting ‘prospect’ and being commercially viable.”

One important advantage of an improved energy conversion efficiency rating is that it makes solar technology more widely usable in climates where there is not an abundance of sunlight during the day.

The flexible, transparent and printable nature of the solar “skins” — which can be printed “layer by layer like a newspaper” — means they could even be stretched across windows on buildings as a way to generate electricity in homes or offices.

Prof Wang added that aside from photovoltaic solar energy applications, the quantum dot technology could be used to split water during hydrogen power production — something he believes to be as “equally important and exciting” in meeting future clean energy needs.

His team was able to achieve a quantum dot solar cell efficiency of 16.6% during testing, beating the previous world record of 13.4%, with the results verified by the National Renewable Energy Laboratory (NREL) in the US.

The work was carried out with funding from the Australian Research Council.

The University of Queensland’s vice chancellor Peter Høj added: “The world needs to rapidly reduce carbon emissions and this requires us to invest much more in research to improve existing energy-generation technologies and develop entirely new ones.

“Harnessing the power of fundamental technological and scientific research is a big part of this process.”