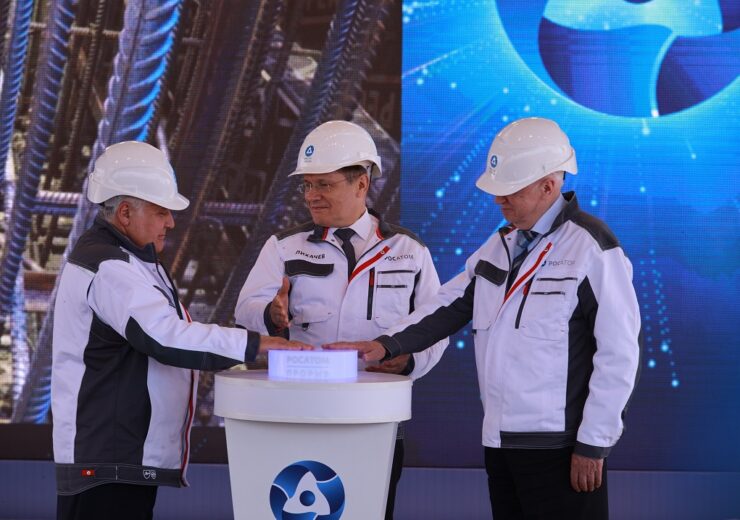 On 8 June, the Russian State Atomiс Energy Corporation Rosatom began construction of the Generation 4 BREST-OD-300 reactor. Located at the Siberian Chemical Combine (an enterprise of the Rosatom fuel division TVEL), it will become the centre of the pilot demonstration energy complex (PDEC), which is part of the Proryv (‘Breakthrough’) Project.

The complex will address several long-standing issues facing the nuclear industry. It will demonstrate that by using ‘natural safety’ technologies accidents like those at Chernobyl and Fukushima can be entirely avoided. It will also address key raw material and environmental problems. The technologies tested at PDEC will form the basis for industrial energy complexes with fast reactors operating in a closed nuclear fuel cycle.

Work on the concept of a reactor like BREST began in Russian research institutes after the Three Mile Island accident in the USA in 1979 and was redoubled after the 1986 Chernobyl accident. Russian experts dissected the direct causes of these accidents — both flaws in the reactor design and errors by nuclear power plant personnel. Then they went further and subjected the entire history of the creation of nuclear reactors to a deep analysis, ultimately showing that there are technological solutions that will avoid Chernobyl-like accidents.

– To ensure that accidents at nuclear power plants that require the evacuation of the local population are not possible.

– To ensure that accidents at nuclear power plants that require the evacuation of the local population are not possible.

– To extract the maximum energy potential of natural uranium in a closed nuclear fuel cycle based on fast reactors.

– To solve the problem of radioactive waste, so the only waste requiring disposal has the same activity as extracted natural raw materials, with the rest recycled.

– To strengthen the nonproliferation regime technologically.

– To ensure competitiveness with other types of generation.

When these principles were formulated, it became evident that a new technological platform for nuclear energy was in the making.

Full-scale work on the BREST project began in 2013. “BREST” is an abbreviation for the Russian name for a fast neutron reactor with lead coolant. However, it is not just any fast reactor, it is a reactor with ‘natural safety’ (sometimes known as ‘passive safety’). The idea behind the reactor is to exclude severe accidents because there is no physical possibility for them to happen.

In the BREST design, a loss of coolant accident like that at Fukushima cannot occur. Lead is used as the coolant and — unlike water — it cannot evaporate, ignite or explode. Therefore, the probability of a severe accident involving the core is 10-9 — ten thousand times less than stipulated by the Russian regulatory requirements. So, any possible accident at BREST would not require the evacuation of the local population.

The combination of the properties of the newly developed dense nitride uranium-plutonium nuclear fuel and lead coolant makes it possible to operate the reactor in a so-called ‘equilibrium fuel’ mode. As much plutonium is produced as is ‘burned’ in the fuel. The plutonium that has accumulated is abstracted from the spent nuclear fuel and combined with depleted uranium (the only fuel input) in fresh fuel, and so on in a circular production.

The nuclear fuel cycle is closed.

The environmental safety of closing the fuel cycle in the BREST reactor is achieved by using specific technologies for the regeneration and refabrication of fuel. Fission products are ‘cleaned’ from the spent nuclear fuel before adding the depleted uranium to the purified mixture to manufacture new fuel. As a result, the so-called minor actinides, which are the most dangerous radioactive substances, return to the reactor as part of the regenerated fuel where they are ‘burned’.

The remaining separated fission products are sent as radioactive waste for long-term controlled storage in special facilities, to be placed subsequently in final disposal without disturbing the natural radiation balance of the Earth.

Today, the Breakthrough is at the stage of intensive implementation. Construction works have been completed at the nuclear fuel fabrication and refabrication facility and equipment is being installed. Concrete is being poured for the foundation of the turbine hall.

The BREST-OD-300 reactor is scheduled to begin operation in 2026. Construction of the irradiated fuel-reprocessing module is expected to begin in 2024 and the fuel production complex is expected to be in commercial operation by 2023. At first, manufacture will be limited to 14 tons per year but later the capacity will be increased to 20 tons. However, fuel production on a scale that allows it to be experimentally substantiated started at the beginning of the last decade. Critics argued that it would take at least 30 years, but it was achieved in seven years.

Breakthrough’s pace is due to its organisation, which is comparable to the Soviet atomic project. It has a clear roadmap, starting with full-scale scientific research, followed by design and production of equipment, and ending with the design, construction and commissioning of PDEC facilities.

The rules for assessing the effectiveness of research and acceptable technological risks are based on the criteria for obtaining specific results. It was possible to introduce uniform, objective requirements for detailed planning, control and acceptance of R&D results, and to plan for the evidence base for the transition to equipment manufacturing. Breakthrough managed to gather a unique team both at the top level of the project and at participating enterprises, which have established Responsibility Centres.

BREST-OD-300’s status as an R&D project is revealed by the abbreviation OD, which stands for ‘experimental and demonstration’ in Russian. Some of its equipment has been tested experimentally. However, several works are yet to be accomplished. For example, the facilities to fully test main circulation pumps and steam generators are ready. One stand for the steam generator is being built and will be ready next year. The second stand is expected to be ready at the site of the Siberian Chemical Combine in 2023.

UV Breakthrough must complete several development projects regarding SNF reprocessing and obtaining components for fresh fuel, since this is the key stage of the closed nuclear fuel cycle concept.

One is hydrometallurgical processing technology, which originates from the early days of the nuclear industry, when the goal was to obtain weapons-grade plutonium. All major R&D projects in this regard have been completed, and it is possible in principle to close the cycle using the technology. However, there are still a few limitations associated, among other things, with the long-term post-irradiation storage of spent nuclear fuel as applied to BREST.

Another processing technology under development is pyrochemistry. It has advantages: in particular, it makes it possible to process spent nuclear fuel immediately it is unloaded from the reactor, instead of waiting several years. However, mastering it has been a slow process and a question remains over whether it will be possible to use pyrochemistry by itself or in combination with hydrometallurgy. As a result, within the framework of the PDEC, the processing module has been planned with the possibility of using a combined technology. The issue of the hottest fission products would be solved by using pyrochemistry, while hydrometallurgy would be used for further purification of materials returned to the fuel cycle.

The BREST launch is planned for 2026, so, reprocessing would be required no earlier than 2028. This time gap allows different approaches to be tried.

A plasma-chemical technology is also being considered: the irradiated fuel would be converted into a plasma, after which isotopes would be separated in an electromagnetic field.

BREST as a stepping stone for new reactors

BREST is expected to become the forerunner for a  large-scale commercial lead-cooled fast reactor, BR-1200. Russian scientists have prepared a technical proposal for the BR-1200 but certain design features will depend on the results of the demonstration unit. For example, the options of using a metal-concrete vessel (as will be demonstrated in BREST) or a conventional metal vessel are being compared for BR-1200 and a decision has not yet been made.

The use of robotics at closed nuclear fuel cycle facilities is inevitable. The fabrication/refabrication module for BREST is currently minimally robotised, but this will change after 2025. Since reprocessing will begin after 2028, there will be a period when it will be possible to upgrade the module, not only to increase its productivity but also to introduce robotics. The robotics will also be actively used in the processing module.

The possibility of using robots is also being studied in the Breakthrough project — robots could replace around 40% of the power unit’s staff. After all, people perform many standardised actions that could be robotised. This option is being considered for the BR-1200 as well.

The Breakthrough project also includes the development of a high-capacity power unit with a fast neutron reactor with sodium coolant — BN-1200. Russia has had a long history of sodium reactors of various capacities since the 1950s.

All over the world, the notion that fast reactors cannot be economically viable has taken root, so the idea was that it was necessary to look for other niches for them, like using the entire potential of uranium raw materials, solving the waste problem, producing fuel for thermal reactors, etc.

However, Rosatom believes that the issue lies with the design flaws of previous fast reactors. Today, Rosatom is finishing a feasibility study of the BN-1200 project. There is high confidence that the competitiveness of the BN-1200 in comparison with VVER units and renewable energy sources in Russia will be ensured.