The strategy will support energy sectors including hydrogen, CCS, nuclear and electric vehicles as the UK targets deep decarbonisation by mid-century 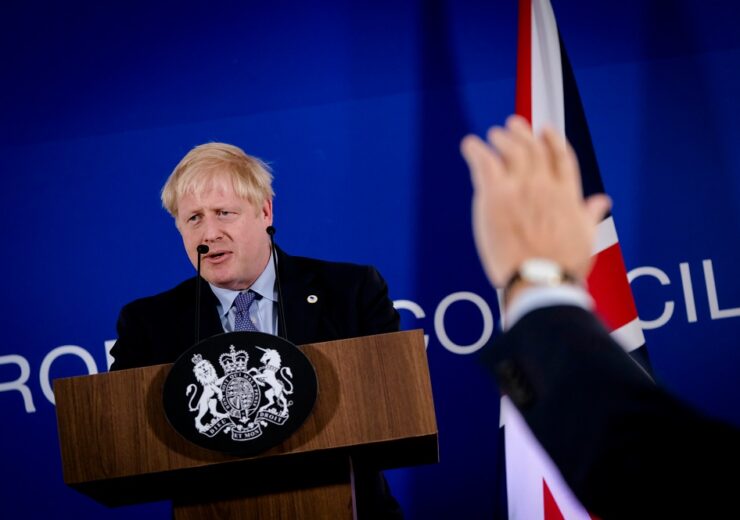 Prime Minister Boris Johnson has outlined details of a £12bn “ten-point plan” for boosting clean energy and greening the UK economy as it targets net-zero emissions by 2050.

The so-called “green industrial revolution” will support a range of clean-energy efforts, including offshore wind, hydrogen and nuclear power. Technologies like carbon capture and storage (CCS) and electric vehicles will also be advanced by the strategy.

Downing Street says the £12bn investment will create and support up to 250,000 jobs in the UK, as well as triggering three times as much private-sector investment by 2030.

Johnson, who is currently self-isolating due to Covid-19 exposure, hopes the programme will appeal to communities in Britain’s “industrial heartlands” of the North East, Yorkshire and the Humber, West Midlands, Scotland and Wales as an engine of new-job creation.

“Our green industrial revolution will be powered by the wind turbines of Scotland and the North East, propelled by the electric vehicles made in the Midlands and advanced by the latest technologies developed in Wales, so we can look ahead to a more prosperous, greener future,” he said.

Among the announcements is a ban on the sale of new petrol and diesel vehicles by 2030 – 10 years ahead of previously scheduled. Hybrid-engine vehicles will be given until 2035 before new sales are prohibited.

He added: “Battery technology has come of age, and the capabilities of electric cars are rising fast while costs are falling. Simple economics is already beginning to drive this transition, regardless of all the other benefits.”

More than £2.3bn is being set aside to deliver EV charging infrastructure, offer grant incentives for consumers to switch to low-emission vehicles, and scale up the UK’s production of EV batteries.

Hydrogen also forms a key part of the ten-point plan, and the Prime Minister outlined an ambition for the UK to develop five gigawatts (GW) of “low-carbon” hydrogen-production capacity by 2030.

This will be supported by £240m in government spending – which is part of a broader £500m hydrogen fund that will also seek to introduce the fuel to households to supplement natural gas for heating and cooking.

There are plans to establish a “hydrogen neighbourhood” by 2023, a “hydrogen village” by 2025, and “hydrogen town” by the end of the decade, as demonstration projects of this emerging fuel technology.

Tom Greatrex, chief executive of the UK’s Nuclear Industry Association, said the inclusion of nuclear energy in the roadmap is “the right approach to take”, urging that “all zero-emissions technologies will need to play their part for net zero to become a reality”.

“The UK government’s commitment to large, small and advanced nuclear as part of the future energy mix is an important pointer towards how we will achieve net zero,” he added.

Carbon capture and storage technology is central to the UK’s decarbonisation ambitions, particularly in hard-to-abate industrial sectors like cement and steel-making. The country aims to remove 10 megatonnes (MT) of carbon dioxide by 2030.

Around £200m is being earmarked to develop two “carbon capture clusters” by the mid-2020s, with another two set to be created by 2030. Earlier in the year, the government pledged £800m to advance carbon capture technology.

Funds will also be directed into improving the energy efficiency of buildings – with a target of 600,000 heat pumps every year by 2028 – decarbonising the aviation and maritime industries with cleaner fuels and technologies, and promoting “greener” ways to travel such as cycling and public transport.

Last month, Prime Minister Johnson announced £160m to upgrade ports and infrastructure that will support the development of the UK’s booming offshore wind industry. The UK is targeting 40GW of installed offshore wind capacity by 2030, up from roughly 10GW today.

“Offshore wind is set to become the backbone of the UK’s electricity system, providing over a third of our power by 2030, and we can rapidly develop green hydrogen to decarbonise shipping, aviation and industry.

“The Prime Minister’s new 2030 hydrogen target is a vital signal to investors and the market, and we will work with government to ensure our world-leading renewable hydrogen technologies play a full part in meeting that target.”

More reaction to the ten-point plan

Industry and environmental groups in the UK have been quick to react to the ten-point plan for clean-energy growth.

The Committee on Climate Change (CCC), an advisory group that engages Westminster on environmental policy, called it a “landmark moment” for the clean-energy transition, although called for it to be turned into a “detailed roadmap” to inform industry.

CCC chief executive Chris Stark said: “The plans announced today will transform Britain for the better, bringing new opportunities and new investment. This is our path out of the economic challenges created by the Covid crisis.

“And it is a set of commitments that will raise the UK’s credibility ahead of the pivotal COP26 climate summit next year. This is just the tonic as we look to 2021.”

Emma Pinchbeck, chief executive of the Energy UK trade association, said: “The energy industry will power delivery on most of the Prime Minister’s bold targets, like those for electric vehicles, heat pumps, and energy efficiency – and on the investment in technologies, like hydrogen, nuclear and wind.

“Businesses see the massive potential for showing global leadership on the green economy as we also host the UN climate change negotiations in 2021 and rebuild after the pandemic.”

Josh Hardie, acting director-general of the Confederation of British Industry (CBI) added: “This plan represents a clear statement of intent from the government. It gives a springboard to the huge opportunities for UK-wide investment and green jobs that a true low-carbon economy can bring.”

Not all are satisfied, however. The UK Labour Party said the Prime Minister’s plan “pales in comparison” to what countries like Germany and France are committing to clean energy and green job creation.

Ed Miliband, Labour’s shadow secretary for Business, Energy and Industrial Strategy, added: “The funding in this long-awaited announcement doesn’t remotely meet the scale of what is needed to tackle the unemployment emergency and climate emergency we are facing.

“Only a fraction of the funding announced today is new. We don’t need rebadged funding pots and reheated pledges, but an ambitious plan that meets the scale of the task we are facing and – crucially – creates jobs now.

“Make no mistake – this announcement from the government falls well short of what is required.”