The move to prevent offshore oil drilling in Florida, South Carolina and Georgia for ten years has drawn criticism from industry groups 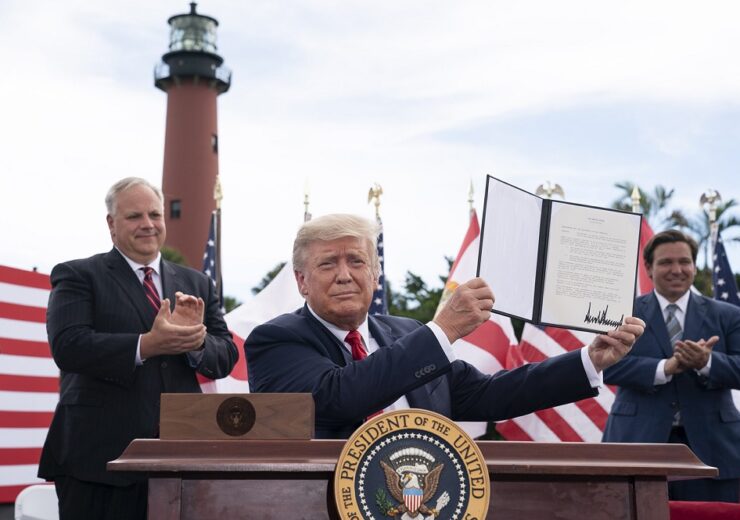 US President Donald Trump has extended a ban on offshore oil and gas drilling off the Florida coast, and widened it to include the Atlantic waters of Georgia and South Carolina.

The 10-year moratorium will prevent leasing in these areas around the Eastern Gulf of Mexico for the purposes of exploration, development or production, running from July 2022 – when the current ban expires – to the end of June 2032.

The decision marks a reversal for the Trump administration, which just two years ago proposed opening up vast areas of US coastal waters to oil and gas drilling.

It is a surprise move that will please environmentalists but deals a blow to oil US oil producers who have long coveted the region for new drilling opportunities.

The American Petroleum Institute (API), an influential trade organisation, said it was “deeply disappointed”, and called it “the wrong approach at the wrong time”.

But President Trump, declaring himself a “great environmentalist”, told an audience in Jupiter, Florida, that the executive order “protects your beautiful gulf and your beautiful ocean, and it will for a long time to come”.

Climate issues are riding high on the US political agenda ahead of November’s presidential election, in a campaign in which Democrat rival Joe Biden has put clean energy and environmental policies at the heart of his manifesto.

Policy decisions made by President Trump during time in office – including withdrawal from the Paris Agreement on climate change, a series of rollbacks to Obama-era emissions regulations, and opening up a protected Alaskan wilderness to oil exploration – have damaged his appeal to voters concerned with environmental issues.

Nevertheless, he told the Florida crowd: “To my administration, environmental protection is a sacred obligation, and so it is our duty to fight for the dreams and livelihoods of the citizens we serve.”

Florida is a key battleground in the upcoming election, with recent polls suggesting a tightly-contested race in the swing state, and Biden was quick to cast doubt on the president’s concern for the environment.

He tweeted: “Just months ago, Donald Trump was planning to allow oil and gas drilling off the coast of Florida. Now, with 56 days until the election, he conveniently says that he changed his mind. Unbelievable.”

Just months ago, Donald Trump was planning to allow oil and gas drilling off the coast of Florida.

Now, with 56 days until the election, he conveniently says that he changed his mind. Unbelievable.

You don’t have to guess where I stand: I oppose new offshore drilling. https://t.co/oxfQNIymBh

Opening up the state’s coastal waters to fossil fuel production is a contentious issue among local residents – many of who will remember the nearby Deepwater Horizon disaster in 2010 – concerned about the impact of oil spills on wildlife and tourism.

While the moratorium may appease the environmental concerns of Floridian voters, it has put President Trump at odds with his long-time allies in the oil and gas industry.

API vice president of upstream policy Lem Smith said: “A ban on responsible energy development in the Eastern Gulf and the South Atlantic puts at risk hundreds of thousands of new jobs, US energy security advancements and billions of dollars in critical revenue for states.

“We are deeply disappointed that the administration has taken this action.”

President of the National Ocean Industries Association Erik Milito added: “The American offshore should be the region of choice for energy production. Limiting access to our offshore energy resources only shortchanges America and dulls our national outlook.”