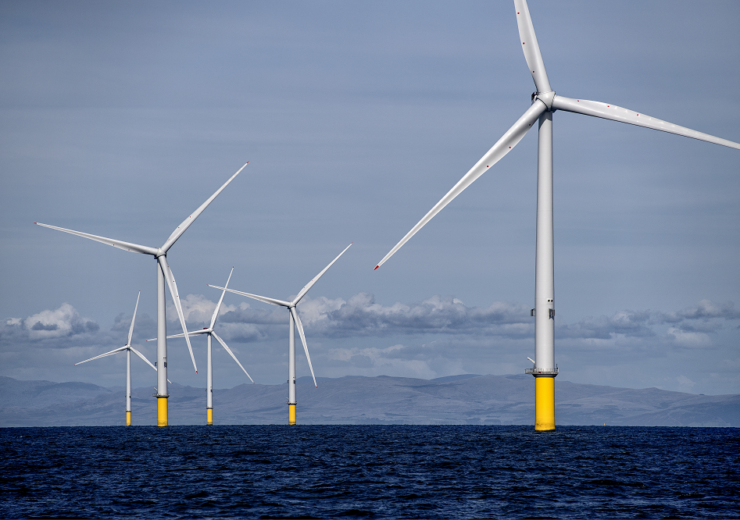 The Walney offshore wind farm is one of the UK's biggest renewable energy projects (Credit: Orsted)

A high renewable energy capacity coupled with strong climate targets make it likely the fuel will become cost-competitive in the UK faster than in other parts of the world, according to a study published today (21 May) by trade organisation RenewableUK.

Wind power also has a bright outlook, with prospects for a six-fold capacity increase by 2050 to more than 120 gigawatts (GW) – three-quarters of which would be added to the offshore fleet.

Future developments in green hydrogen and wind power could spearhead a wider surge in renewable capacity growth, with up to 76% of the UK’s energy mix being supplied by clean sources in 2050, according to the report.

It was revealed today that in the first quarter of 2020, renewable energy sources comprised 40% of the UK energy mix, surpassing fossil-fuel generation for the first time as high wind speeds supercharged output from the domestic turbine fleet.

“This is an incredibly exciting time for the energy sector. We’re entering an era of rapid technological change as we move closer towards total decarbonisation, using an even wider range of technologies such as renewable hydrogen alongside more wind, solar and battery storage.

Green hydrogen needs investment, but has big potential — and not just in the UK

While still a nascent technology, green hydrogen — that produced using renewable power sources – has been widely tipped to become an integral part of global decarbonisation efforts.

A recent analysis by BloombergNEF found that, with the necessary levels of investment, policy support and infrastructure upgrades, almost 700 million tonnes of the fuel could be in use worldwide by 2050, accounting for around a quarter of projected energy demand in a 1.5C climate scenario.

In the UK, several localised projects are underway to develop industrial clusters running on hydrogen fuel, while government funding was awarded in February to several projects aiming to accelerate ways to produce and use the fuel source.

As well as fuel switching in industrial zones, hydrogen has been earmarked to replace petroleum in the transport sector – a big contributor to overall greenhouse gas emissions – from road transport to shipping and even aviation.

The UK has established itself as a key market for wind power – particularly offshore – and, despite uncertainties to project completion and supply chain disruption presented by the coronavirus crisis, RenewableUK expects this trend to accelerate in the years ahead.

By 2030, it estimates the UK offshore wind industry could quadruple its capacity to 40GW – bringing in £54bn in private investment and supplying more than a third of the country’s electricity.

Onshore wind, which recently received a boost after Prime Minister Boris Johnson repealed a previous government ban on new developments, could add 26GW by 2030 – which, when combined with the potential growth of offshore capacity, means wind power could feasibly deliver more than half of the UK’s power demand within the next 10 years.

Yesterday, the International Energy Agency (IEA) reported that the impact of Covid-19 has slowed the accelerating progress of the global renewables industry, anticipating a 13% annual decline in new capacity additions this year as project delays, supply chain disruptions, and financing challenges brought on by the pandemic.

While the industry has displayed “resilience” compared to the turmoil that has unfolded in fossil fuel markets such as oil and coal, the energy watchdog cautioned that policy measures need to developed to ensure renewables can rebound quickly as the world emerges from the health crisis.

IEA executive director Dr Fatih Birol said: “The spectacular growth and cost reductions of renewables over the past two decades have been a big success story for global energy markets, driven by innovation in both technology and policies.

“But continuing cost declines will not be enough to protect renewables from a range of uncertainties that are being exacerbated by Covid-19.

“This underlines the critical importance of getting stimulus packages and policy strategies right in order to ensure investor confidence in the months and years ahead.”