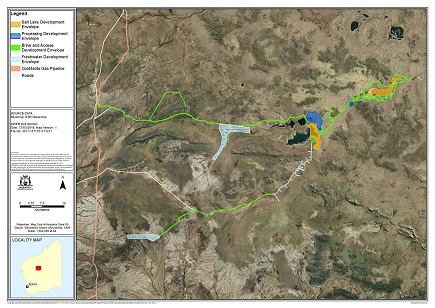 The Beyondie SOP project is located 160km south, southeast of the iron ore producing town of Newman and 200km north of the base metals and gold mining areas of Wiluna.

Unlike conventional mining operation, the project involves extraction of hypersaline groundwater which is pumped to ponds. The pumped water is evaporated and the salts concentrated, with the different salts (potash is a form of salt) extracted and purified.

EPA chair Tom Hatton said that the Kalium Lakes’ Beyondie project was one of five potash projects being referred to the EPA for assessment.

“While there are similarities between the proposals, each will be considered and assessed on its unique location and environmental impact.

“The Kalium Lakes’ proposal is the first potash environmental assessment completed and we have recommended a number of conditions to protect the surrounding environment and native animals.”

The Beyondie SOP Project is scheduled to start operations in 2020. It is expected to become the country’s first commercial SOP to enter production.

Over the operational life of more than 30 years, the project will have production rate of 164,000 tons per annum (tpa) of SOP.

The mine is expected to produce premium granular and soluble suite of products which contain more than 51% K2O and less than 0.5% Chloride.

Kalium Lakes managing director Brett Hazelden said: “Kalium Lakes has worked closely with the officers at the EPA during the past four years, with project referral in October 2017, completing the Environmental Scoping Document and the Environmental Review Document during 2018, culminating in the EPA Board recommending approval this month.”