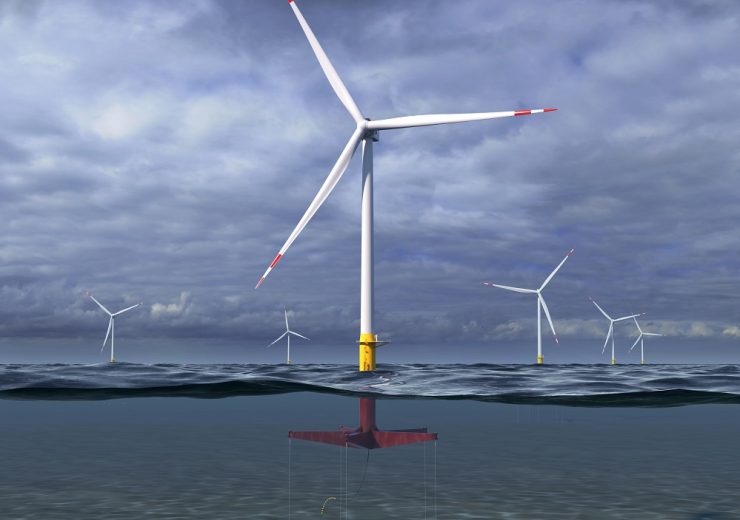 Researchers at GE have previewed a design concept for a 12 megawatt (MW) floating wind turbine that could usher in a significant new era for clean offshore energy.

The innovation has the potential to make large-scale floating wind projects more commercially viable, and “dramatically expand” the range of offshore locations where wind energy projects can be installed in the future.

The design is part of a two-year, $4m project funded by the US Department of Energy’s Advanced Research Projects Agency-Energy (ARPA-E) through the ATLANTIS (Aerodynamic Turbines Lighter and Afloat with Nautical Technologies and Integrated Servo-control) programme.

“Designing a floating turbine is like putting a bus on a tall pole, making it float and then stabilising it while it interacts with wind and waves,” said Rogier Blom, senior principal engineer at GE. “Doing this well is both a design and controls challenge.”

The project hinges on developing advanced controls for the turbine platform that can make automatic adjustments to changing environmental conditions at sea – allowing the structures to be made lighter and less expensive to deploy.

Notes from the ARPA-E website explain: “Floating offshore wind turbines (FOWTs) are currently designed to be large and heavy to replicate more familiar onshore wind turbine dynamics, maintain stability, and survive storms. However, this approach fundamentally limits how inexpensive FOWTs can ever become.

“Radically new designs that do not require a massive floating platform – applying the control co-design (CCD) approach of substituting mass by control systems – are needed.”

While several floating wind projects have been developed around the world, large-scale offshore wind deployment has to-date been dominated by fixed-bottom turbines.

Standing at 248 metres tall with a rotor diameter of 220 metres, GE’s own 13MW Haliade-X model is currently the most powerful on the market. A 14MW version is under development, and planned to be debuted at the third phase of the UK’s Dogger Bank Wind Farm, due to come online in 2026.

But fixed offshore installations are restricted to water depths of around 60 metres or less, so overcoming the design and cost challenges that have so far limited the roll-out of large floating structures would open up significant new avenues for offshore renewable energy.

This is true of the US, where offshore wind planning has primarily been focused along the eastern coast where waters are shallow enough to accommodate fixed-bottom turbines. But in the west, water depths are greater and will require technologies like floating turbines if an offshore industry is to successfully develop.

US officials recently set a target to build 30 gigawatts (GW) of new offshore wind capacity by 2030 – a huge undertaking for a market where offshore capacity is currently negligible – with both coasts targeted for development.

Research from the country’s National Renewable Energy Lab suggests the introduction of floating turbines to the US renewable portfolio would drive up the potential of national wind resources to more than 7,000 terawatt hours (TWh) a year – almost double the country’s current annual electricity consumption.

In other parts of the world, floating wind has been tipped as having a big role to play in regions like Japan, South Korea and Taiwan, where thermal electricity generation is being gradually retired and land constraints make offshore alternatives an attractive solution to decarbonisation goals.

The ability to site floating turbines in deeper waters also enables installations to be deployed further away from the coast, where wind speeds are often higher and more consistent.

The ultimate aim of GE and Glosten’s project is to design a lightweight floating turbine that delivers a 35% mass reduction in the tower and platform, resulting in “a very significant reduction” in the levelised cost of electricity (LCOE) – in turn making investment less risky and helping the industry to achieve scale.

Ben Ackers, vice president at Glosten’s ocean engineering and analysis division, added: “Collaborating closely with GE gives us another layer of detailed engineering design input beyond the standard drivers of site conditions, construction cost, schedule, and the resulting LCOE. This is the cooperation needed to bring floating wind to technical and commercial success.”