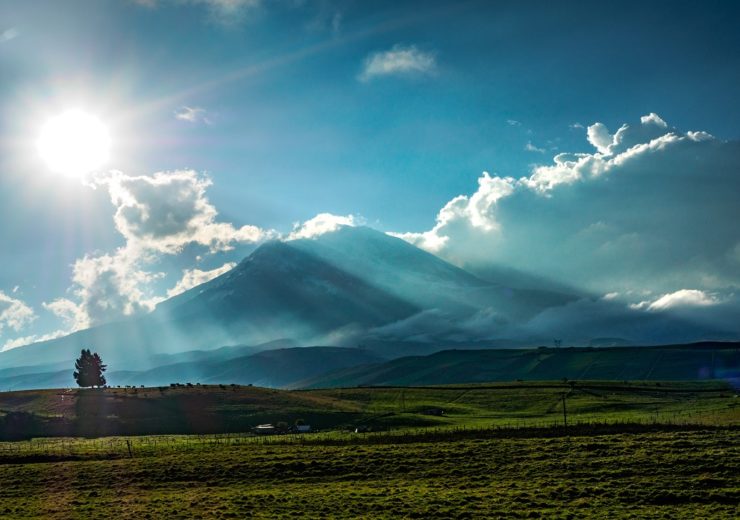 The Lost Cities project lies in the foothills of the Andes mountain range (Credit: Aurania Resources)

It was discovered by field teams looking for one of the two historical gold mining centres, which have been described in manuscripts from Ecuador, Peru, Spain and the Vatican.

Sevilla de Oro and Logroño de los Caballeros are understood to have been operated in the region by Spanish colonisers between 1565 and 1606.

The mining company hopes that by tracing the route of the road it will be able to discover the path to both sites, and potentially lucrative gold deposits.

Aurania CEO and chairman Dr Keith Barron said: “The historical record names the treasurers of the ‘Caja Reales’ — the Royal Treasuries — in Sevilla and Logroño, so we know that the gold produced was cast into crude ingots for transport to the capital Quito.

“We always presumed that these ingots would have been transported by horse or donkey along a well-travelled route from the mines.

“It appears that we have come across one of these trails, though it is cut by more recent landslides at both ends.”

The firm will now continue its search of the region to try to find extensions of the road, using data processing techniques to plot an estimated route, based on the local topography and the paths likely to have been followed by workers at the time.

It will also conduct a LiDAR survey of the area — which involves laser measurements and the creation of 3D digital representations — to better understand the terrain and to discover any clues that could hint at the location of the lost cities.

Dr Barron added: “Our LiDAR survey should pick up the continuations of the trail and its termination at the historical mine sites.

The Lost Cities project is located across the Jurassic Metallogenic Belt in the eastern foothills of the Andes mountain range in Ecuador.

The ruins of the road run north to south along Aurania’s concession block at the site, and were discovered over a distance of 2.5 kilometres.

The highway has been deliberately engineered, according to the gold miner, cut into embankments and lined with shale blocks at its downslope edges, which have prevented significant erosion.

The project to discover the ancient mining centres in Ecuador has been in the pipeline for more than 12 years, and is the result of extensive academic archival research into the region’s history and geology.

In 2006, Dr Barron and his team were involved in the significant Fruta del Norte gold discovery in the nearby Cordillera del Condor region of Ecuador, using the same techniques of historical research and geological analysis.