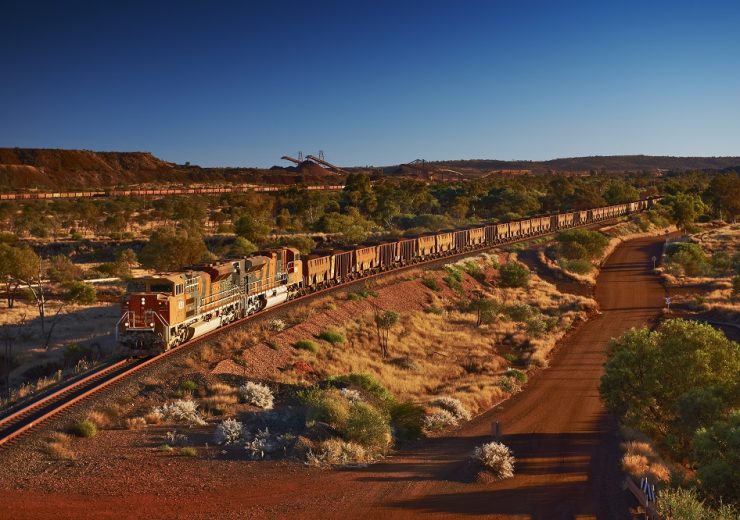 Iron ore being transported by rail at the Newman processing hub in Western Australia (Credit: BHP)

Iron ore remains one of the most sought-after commodities in the world due to demand driven by the steelmaking industry – and the top-producing countries have a big role to play in supplying this key manufacturing ingredient to the global marketplace.

Many of the world’s largest diversified miners, including Rio Tinto, BHP and Anglo American, have established strong footholds in the iron ore sector, particularly in Australia where around 28% of the world’s known reserves are located.

Total worldwide production in 2020 stood at around 2.4 billion tonnes, according to data from the US Geological Survey, a small decrease compared to the previous year.

Analysts have forecast production growth through to 2025, however, driven by high consumption from Chinese industry and planned infrastructure spending in other major economies as they emerge from the Covid-19 pandemic.

The price of iron ore, along with other commodities like copper, has risen significantly since 2020 on the back of rising demand for raw materials, as governments begin to loosen the coronavirus-related restrictions that have slowed industrial activity worldwide and plan ahead for major stimulus spending that is hoped will boost economic growth.

The country is also home to the world’s largest crude iron ore reserves, estimated by the US Geological Survey at around 50 billion tonnes.

Mining for iron ore is a huge industry in Australia, and exports of the commodity generate millions of dollars in revenue for the government each year.

Many of the world’s largest iron ore mining companies have set up operations in the country, particularly in the Pilbara region of Western Australia where the majority of its reserves are located.

Brazil produced an estimated 400 million tonnes of iron ore in 2020 – slightly less than in 2019 but still roughly 17% of the global total.

The Carajás Mine in Brazil’s northern state of Pará is one of the largest iron ore mines globally, and is operated by Rio de Janeiro-based company Vale.

Vale has a strong presence in the country and is currently the world’s leading iron ore miner, with annual output reaching 300 million tonnes in 2020.

An estimated 340 million tonnes of iron ore were produced in China in 2020, placing it third on the list of the largest iron ore producing countries.

China is also the world’s biggest consumer of the commodity, and combines domestic production with additional foreign imports to feed its huge steelmaking industry, which currently accounts for more than half of the world’s steel output.

There are an estimated 20 billion tonnes of crude iron ore reserves in China, with Liaoning, Sichuan, Hebei, Inner Mongolia and Shanxi among the most resource-rich regions of the country.

India accounted for just under 10% of global iron ore production in 2020, measured at 230 million tonnes.

Resources are spread widely throughout the country, although the states of Odessa, Jharkhand, Karnataka and Chhattisgarh are notable for their productivity.

Major resource deposits are located in the Kursk magnetic anomaly in the west of the country, as well as in areas around the Ural Mountains, particularly the regions of Tula and Siberia.