If the offshore industry is to remain profitable in this era of low oil prices, critical measures must be taken to improve cost control and efficiency in upstream exploration and production. GE Subsea System’s Tassos Vlassopoulos explores the industry-wide drive for standardisation. 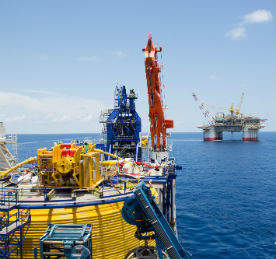 Oil’s recent slide has exposed the industry’s bloated cost base for the entire world to see. With a continuing shift to deeper waters and a growing reliance on complex subsea deployments, oil and gas must learn from other sectors to reduce project costs and improve delivery performance.

Between 2005 and 2012, total annual capex spending on upstream projects by major IOCs rose precipitously from $59-132 billion. The consequence is that many of today’s offshore developments are unviable without a high oil price. Premier Oil’s Sea Lion in the Falkland Islands is a prime example, delayed indefinitely until the market recovers.

"The capex of the major IOCs went up two and a half times in just seven years," says Tassos Vlassopoulos, global strategy and marketing director for subsea and drilling at GE Oil & Gas. "Why have these costs escalated? Because projects became much more complex and input prices have risen."

Growth in input prices is responsible for $40 billion of the increase. Labour and raw materials costs rose sharply prior to 2008, while increasingly stringent local content rules simultaneously made it harder to achieve economies of scale.

The vast majority of the rest of the increase – $33 billion – is attributable to deepwater projects’ growing size, plus their greater technical and project management complexity. Two thirds of offshore projects now run significantly over budget or behind schedule.

According to Vlassopoulos, improving cost and performance must start by standardising and modularising projects as much as possible, from initial specifications through to interfaces and documentation. Reusing previous designs has obvious cost benefits, as does designing for value – only specifying the features the customer needs – and avoiding ‘feature creep’.

Standardisation is a huge challenge for the oil and gas industry – and subsea in particular. Each oil company produces its own custom equipment, and there are no industry-wide benchmarks for operations.

Subsea contracts epitomise this complexity: typically a thick wad of documents, of which far too many are irrelevant. Any specification for a subsea tree will feature multiple industry standards – ISO, ANSI, API, DNV, ASTM, NACE or SAE – intimately intertwined with the IOC’s own custom standards.

Vlassopoulos cites a tree contract that contained around 700 different standards and 280 client documents that the project’s engineers had to review. Of those, 105 documents needed detailed review, but only 42 were actually commented on.

So, before any work starts, around 12 man-weeks of engineering time are spent screening, reviewing and compiling comments. Feature creep exacerbates this problem, while treating every component as of equal importance increases the workload with unnecessary quality checks.

"You should conduct a risk assessment to determine which components are actually critical," notes Vlassopoulos. "Otherwise it’s wasteful."

An end to tailored testing

The oil industry is also profligate in its component testing, running far more physical tests than industries like power, wind or aviation. To counter this, oil industry players should question whether it is possible to reuse test results for similar existing designs; or, if not, whether computer modelling simulation and analysis is sufficient.

"If we develop a new solution each time, we are actually increasing, rather than reducing, the risk."

Only when these first two options have been ruled out should real testing start. But again, the current default bespoke approach makes this kind of reuse harder to achieve. Perhaps counter-intuitively, it also increases risk.

"All operators will claim that we need a bespoke approach, because there is something different about this field that we need to pay attention to and develop a solution for," says Vlassopoulos. "But if we develop a new solution each time, we are actually increasing, rather than reducing, the risk."

By prototyping all the time, operators cannot learn from data gathered through repeated deployments. In the long term, learnings from reuse promote optimised designs and better risk mitigation.

So, is there a better model that oil and gas can adopt? In aerospace, single regional or global bodies like the Federal Aviation Administration or the European Aviation Safety Agency set standards that all manufacturers and airlines must follow. As long as they meet those standards, engine-makers can apply their own design approaches, yet still sell the same engines to anyone.

"One standards body certifies jet engines, and once certified, they can be used by any manufacturer or airline," says Vlassopoulos. "The closest comparison in oil and gas is the API; but it’s not a certifying body – it exists to share best practices. So we do have API standards, but each operator then adds their own complexities on top."

Again, this bespoking adds complexity and cost. A manufacturer supplying blowout preventers (BOPs) to different operators will have to meet different standards, and may supply different parts to each client. However, it is not possible to simply cut and paste other models onto oil and gas.

"Aviation is at one extreme, where you can have a single set of standardised minimum requirements," says Vlassopoulos, "but oil and gas is at the other extreme, taking bespoke approaches to cope with variations in reservoir conditions and different operational procedures, across – and even within – locations."

A step in the right direction

The actions of further empowering bodies like the API, and the American Bureau of Safety and Environmental Enforcement (BSEE), are the most likely path to accepted cross-industry standards. The BSEE’s recently proposed Well Control Rule, which sets extensive minimum standards for BOP design, manufacture, repair and maintenance, is one indicator of how it might work.

"We need to have more fully staffed bodies to set requirements, instead of just sharing best practice," states Vlassopoulos. "But, for now, we’ll see operators continuing to define how things are done. They’ll need to start standardising within their own operations before we see it happen across the industry."

Managing the obsolescence of the electronics, software and firmware used in subsea control systems can show the potential benefits of working together. Because oil and gas makes relatively little use of electronics, for example, it is forced to adopt a single common set of standards formulated in other sectors, like telecoms, rather than creating its own.

The further benefits of collaboration can be seen in other areas, too: operators like BP, Shell and Statoil saw the opportunity for a joint industry project, and together retained aviation industry consultants Through Life Support (TLS) to certify systems on their behalf. TLS developed a single set of processes and guidance with which every participant and its suppliers could effectively work.

"To optimise our use of resources, we need to increase the ‘circularity’ of products, by designing for decommissioning and wider reuse of obsolete equipment."

But elsewhere, innate conservatism and the need for individual operator approval still hinders this kind of innovation. There are huge unexploited opportunities to substitute higher performing and less expensive or less scarce materials in existing designs, to introduce techniques like 3D printing, and to refurbish and recycle older assets.

"To optimise our use of resources, we need to increase the ‘circularity’ of products, by designing for decommissioning and wider reuse of obsolete equipment," says Vlassopoulos.

IT has a major role to play here, with imaginative use of predictive analytics and supply chain management tools to increase asset utilisation. That might mean operators renting equipment to each other, sharing infrastructure or predicting well performance to better fill the schedules of vessels on contract.

"You have to ensure that you have a seamless operational view, from the day that you book an order to the day you actually execute the order and it’s at the factory gate, waiting to be delivered to the customer," says Vlassopoulos.

Those software tools should support streamlined supply chains where every subcontractor’s roles and responsibilities are clear, organised by a lead contractor that holds the project together and ensures clear communication between the different OEMs. Reducing the number of inspections carried out during contract execution is one compelling goal: GE Subsea Systems organises over 100 inspection visits every week.

"You have inspections from both the customer and the lead contractor," Vlassopoulos says. "So you have to stop and start your manufacturing operations many times to satisfy the multiple inspections."

Other industries engage with suppliers at the concept and feasibility stage of a project, and employ functional – rather than detailed – specifications in tenders. Adopting this approach would give oil industry manufacturers a lot more freedom to innovate and suggest solutions with the lowest possible cost, likely based on existing products. Operators that ask for two quotes – one based on their own bespoke specification and the other on the manufacturer’s solution – would see a significant price difference.

"EPC contractors need to be more involved in developing a project for value rather than simply justifying their work on a gate and milestone basis," Vlassopoulos says. "At the moment, if a project progresses, they don’t care too much about the cost."

Significant change is needed to make offshore production competitive again, but achieving this will be difficult for an industry as conservative as oil and gas.

Rather than radical transformation, operators should aim to work together as much as possible and incrementally improve every conceivable project element. Constant minor ongoing improvements in standardisation, design or project management will be less likely to meet resistance, but when combined, they have the potential to change the game completely.