According to new research, the UK is expected to direct £13bn in subsidies to biomass projects by 2027, which are exempt from carbon tax under EU law 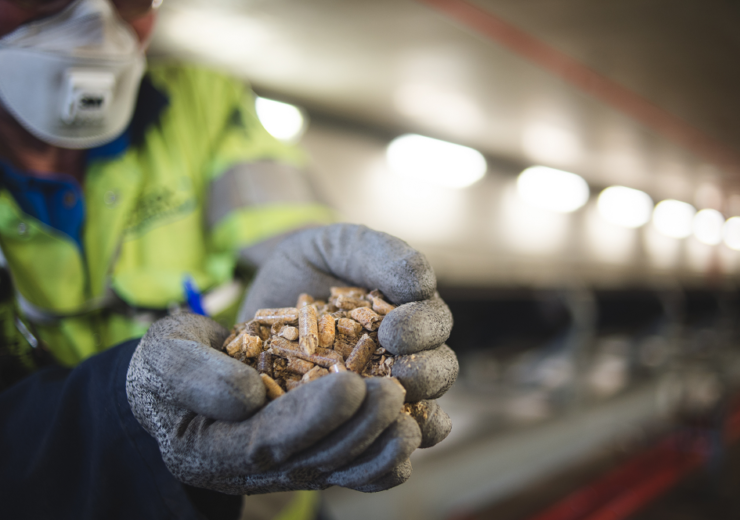 Biomass fuel, commonly in the form of wood pellets, has helped power generators switch away from burning coal (Credit: Drax)

The role of government subsidies for biomass power generation in the UK has come under scrutiny, as a new analysis casts doubt on the green credentials that have exempted the industry from paying carbon tax.

According to research published today (15 June) by climate think tank Ember, government support for biomass projects in the country will hit more than £1bn ($1.3bn) this year, and is expected to total more than £13bn ($16.3bn) by 2027 – the date at which current subsidy agreements expire.

The fuel, most commonly burned in wood-pellet form, does not currently fall under the requirements for carbon taxing under EU or UK law, something the researchers claim delivers an “unfair” tax break totalling £333m ($419m) per year.

Ember analyst Phil MacDonald said: “Biomass power stations are in receipt of a huge tax break, based on an outdated assumption that burning wood is carbon neutral. Meanwhile, renewables like offshore wind guarantee emissions cuts – for less than half the price of burning wood for electricity.

“As they continue to receive billions in subsidy, the onus is now on the biomass industry to be transparent about the true emissions impact of their technology.”

According to the researchers, the UK’s imminent withdrawal from the EU presents “an opportunity to reassess” the European legislation that has so far exempted UK biomass facilities from carbon taxation, by incorporating the power source into its new carbon-pricing mechanism.

Some supporters of biomass, which has been used to make the transition away from coal-fired electricity generation, argue that emissions created by burning wooden pellets can be absorbed at a future date by the forests that are planted to replace what is harvested as fuel.

The problem, argues Ember, citing a research paper from the European Academies’ Science Advisory Council, is that carbon sequestration by future forest growth can take decades to occur, and so the argument that new trees neutralise the carbon footprint of burning biomass risks ignoring the short-term increase in emissions, and is therefore incompatible with the more urgent goals set out by the Paris Agreement.

The Ember report states: “Policymakers and investors considering biomass generation must become familiar with the concept of ‘carbon debt’ – that biomass emissions released into the atmosphere today create an immediate spike that may not be sequestered by growing forest for many decades.

“The Paris Agreement requires reductions over much shorter timescales, meaning biomass generation should pay a carbon tax proportional to its carbon impact over these timescales.”

An International Energy Agency (IEA) study has addressed some of these claims, noting that “forests are generally managed as a series of stands of different ages, harvested at different times, to produce a constant supply of wood products”.

It added: “Climate effects of woody biomass should be considered at the estate/landscape rather than plot level – the time gap between harvest and regrowth of a single stand is less relevant.

“If annual harvest in the forest landscape does not exceed the annual growth of the forest there is no net reduction in forest carbon.

“Switching from coal to woody biomass reduces atmospheric CO2 over time scales relevant to climate stabilisation, with biomass from sustainably-managed forests or land being part of the biogenic carbon cycle, in contrast to fossil carbon that increases the total amount of carbon in the atmosphere.”

There are currently two large-scale power stations in the UK that burn wooden pellets to produce electricity – Drax in North Yorkshire, operated by Drax Group, and Lynemouth in Northumberland, owned by Czech utility EPH.

In 2019, the woody fuel stock accounted for roughly 11% of the UK’s overall power generation and 29% of its non-fossil, non-nuclear generation.

A third facility, MGT Teesside, is scheduled to come online next month, although Covid-19-related delays may extend the timetable.

Of the three, Drax – the UK’s largest power plant which has switched its activities from coal to biomass in recent years – is by far the biggest, with 2,580 megawatts (MW) of its overall 3,960MW electricity-generation capacity coming from burning wood pellets.

Responding to today’s report, a Drax spokesperson said: “The emissions from biomass power generation should not be taxed because under UN Intergovernmental Panel on Climate Change (IPCC) global carbon-accounting rules, woody biomass emissions are already accounted for in the Agriculture, Forestry and other Land Use (AFOLU) sector.

“Any change would mean that emissions were being counted twice.”

On the issue of carbon debt, the company pointed out that, in the US, where around two-thirds of its biomass fuel is harvested, “there are more acres of forest and greater rates of forest growth than what is harvested, even as harvests have increased over the past 50 years”.

Drax has made commitments to become carbon negative by 2030, saying it will do so by integrating carbon capture and storage technologies into its wood-burning operations.

Four of its six coal fired-generators have now been converted to run on biomass, and it has pledged to end all coal burning by the end of March 2021.

The company spokesperson added: “By using bioenergy with carbon capture and storage (BECCS), Drax could deliver 16 million tonnes of negative emissions a year – a third of the negative emissions the UK needs to meet its net-zero targets by 2050.”