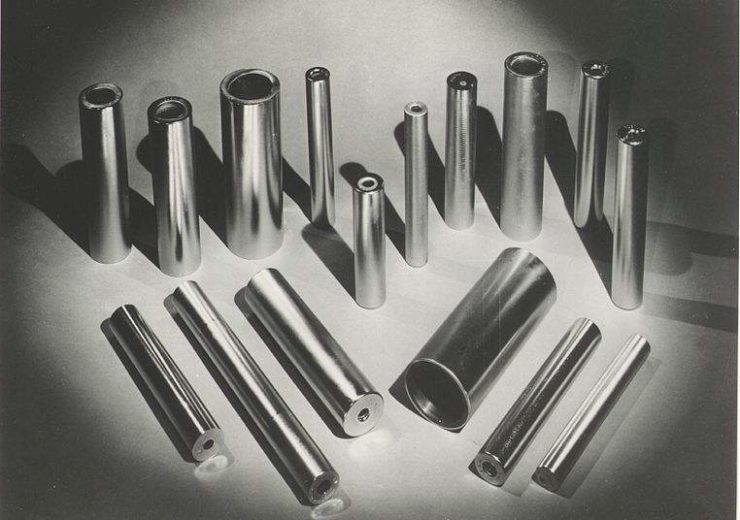 Some of the machined uranium shapes at the Feed Materials Production Center, operated by the National Lead Company of Ohio. (Credit: ENERGY.GOV/Wikipedia.org.)

In 2017, the top ten uranium producing companies marketed 86% of the world’s uranium production, according to a report released by World Nuclear Association.

Kazakhstan, Canada and Australia are the major producers of uranium, accounting for more than two-thirds of the world’s production.

Here is the list of top uranium producing companies in the world:

Headquartered in Astana, Kazakhstan, Kazatomprom is the world’s largest producer of uranium. The company produced 12,488 tons U in 2017, accounting for 21% of the world’s uranium production, according to World Nuclear Association report.

The company claims to have the largest reserve base in the industry, with attributable uranium reserves of 300 ktU. Kazatomprom operates 26 deposits grouped into 13 mining assets located in Kazakhstan.

Based in Saskatoon, Saskatchewan, Cameco is one of the world’s largest publicly traded uranium companies. In 2017, the company produced 9,155 tons U, occupying a share of 15% in the world’s uranium production.

The company claims that its tier-one operations in Canada and Kazakhstan have the licensed capacity to produce over 53 million pounds (100% basis) annually.

It has nearly 458 million pounds of proven and probable uranium reserves on three continents. Cameco is also a major supplier of uranium refining, conversion and fuel manufacturing services.

With headquarters in Courbevoie, Paris, Orano is one of the top uranium producing companies in the world. In 2017, the company produced 8,031 tons U, accounting for 13% of the world’s uranium production.

The company’s production comes from the McArthur River and Cigar Lake mines operated by Cameco. The two mining sites are located nearly 700km north of Saskatoon in Saskatchewan Province.

In April 2017, Orano signed a strategic agreement with KazAtomProm to strengthen cooperation in the uranium mining sector in Kazakhstan.

A wholly owned subsidiary of the Russian state-owned nuclear corporation Rosatom, Uranium One is a Canadian uranium mining company with headquarters in Toronto, Ontario. The company produced 5,102 tons U in 2017.

The company is responsible for Rosatom’s uranium production outside the Russian Federation. Uranium One is involved in uranium production through its subsidiaries and joint ventures. It is also engaged in the exploration and development of uranium properties, in Kazakhstan, the US, Tanzania and other countries.

The firm generates a significant part of its revenues from the sale of uranium concentrates. It sells its uranium to major nuclear utilities in Russia, Europe, North America, South America, Middle East and Asia.

The two Chinese companies produced 3,897 tons U in 2017, accounting for 4% of the world’s uranium production. China National Uranium (CNUC) is a CNNC subsidiary that is involved in uranium mining domestically and internationally.

It is a Russian uranium mining company with headquarters in Moscow. The company is wholly owned by Atomenergoprom. ARMZ produced 2,917 tons U in 2017, accounting for 5% of the total uranium production in the world.

It manages Russian uranium mining assets, represented in the Trans-Baikal Territory, the Republic of Buryatia, and Kurgan region.

Production of natural uranium is the core business of ARMZ. The company is also implementing many non-uranium projects, including the construction of an integrated lead and zinc concentrates plant in the Novaya Zemlya archipelago.