Under the international climate pact, participants agreed upon a framework to reduce greenhouse gas emissions and cap the rise in global temperatures 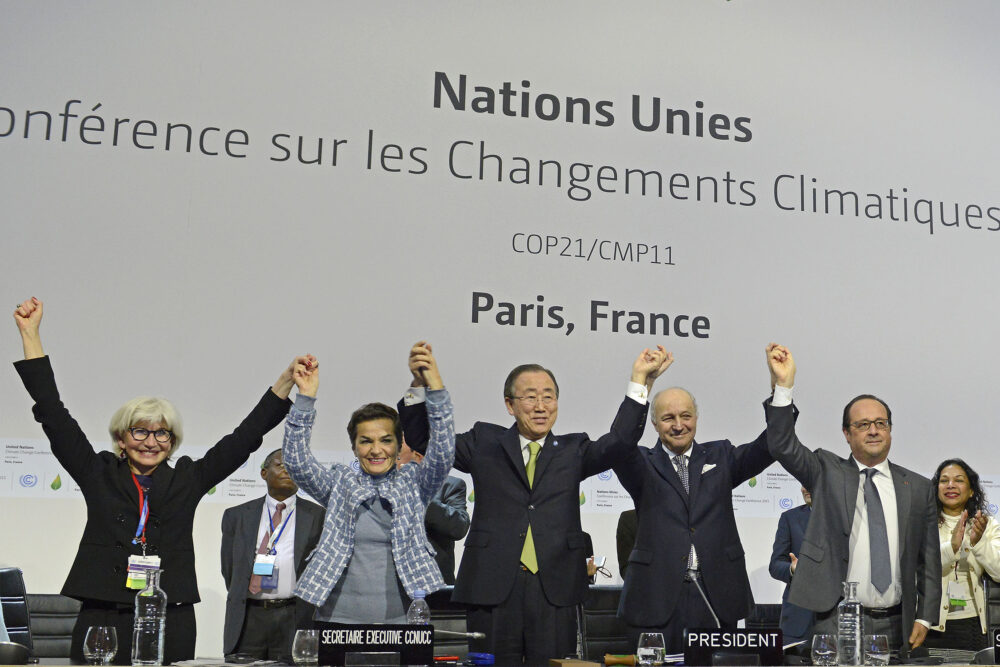 Following a number of years of complex negotiations, 197 nations came together to form the Paris Agreement in December 2015 at the United Nations’ Climate Change Conference (COP21) in the French capital (Credit: Flickr/UNclimatechange)

The climate goals set out in the Paris Agreement created a new path for countries to monitor emissions and increase their efforts to limit the impacts of climate change. James Murray provides an insight into what the agreement’s targets are and what progress has so far been made to achieve them.

Following a number of years of complex negotiations, 197 nations came together to form the Paris Agreement in December 2015 at the United Nations’ Climate Change Conference (COP21) in the French capital.

Under the international climate pact, participants agreed upon a framework to reduce greenhouse gas emissions and cap the rise in global temperatures at “well below” 2C above pre-industrial levels by 2100, with 1.5C being the ideal scenario.

The Paris Agreement replaced the Kyoto Protocol, which was adopted in 1997 but did not come into force until 2005 due to its complex ratification process.

A main criticism aimed at Kyoto is that it only bound developed countries to reduce their greenhouse gas emissions, while developing nations and emerging economies – including high polluters China and India – were required to report data but had no obligations to reduce emissions.

“The Paris Agreement encompasses and speaks equally about all countries,” says Dr Joeri Rogelj, a lecturer in climate change and the environment at the Grantham Institute for Climate Change.

“At the same time, it doesn’t set legally-binding obligations like the Kyoto Protocol, but it sets out an architecture for continuous climate action in the future,” he adds.

“You can really see it as kind of a basic framework within which climate action will be following for the foreseeable future.”

Countries’ commitments to the climate goals of the Paris Agreement

Under the agreement, parties are required to submit nationally determined contributions (NDCs), where each country defines their own climate targets and contributions to help reach the universal ambitions.

While there are no penalties imposed on nations for falling short of their proposed targets, the pact does require the monitoring, reporting, and reassessing of individual and collective goals.

The treaty also sets forth a requirement for countries to announce their next round of NDCs every five years, providing them with the opportunity to ramp up their climate ambitions over a period of time.

“That obviously gives governments more leeway in terms of what they want to do,” says Patrick Bayer, senior lecturer and chancellor’s fellow in the Centre for Energy Policy at the University of Strathclyde.

“This new freedom allowed governments to sign onto the Paris Agreement, whereas they weren’t prepared to sign onto international climate commitments in earlier negotiations,” he adds.

“I think this fundamental shift was really critical for the success of the Paris Agreement, with governments all of a sudden willing to commit to climate change action – making it a landmark agreement.”

Since the treaty entered into force in November 2016, 189 of the 197 parties have ratified their status.

But the US formally initiated its withdrawal in November 2019, as former president Donald Trump said the Paris accord would “undermine the US economy” and put the country at a “permanent disadvantage”.

With the nation being the world’s second-highest CO2 emitter, its withdrawal – which came into force on 4 November 2020 – was a huge blow to the global climate efforts.

But, following President Joe Biden’s election victory in November 2020, the US has now re-joined the pact after he continuously made the pledge during his campaign.

What are the participating countries’ emissions targets?

Under the agreement, parties are encouraged to formulate and communicate their “long-term low greenhouse gas emissions development strategies” and have been invited to communicate those proposals to the United Nations Framework Convention on Climate Change (UNFCCC) before COP26 in Glasgow, UK, in 2021.

As of November 2020, 18 countries and the EU have formally submitted their strategies, with the UK, France, Sweden, Denmark and New Zealand all setting legally-binding targets to reach net-zero emissions. Biden is also expected to make a similar commitment for the US in due course.

As part of the UNFCCC’s Climate Action Alliance, more than 2000 stakeholders have joined the initiative – including 120 countries – with the aim of reaching net-zero CO2 emissions by 2050.

What other climate goals does the Paris Agreement set?

In order to reach the Paris Agreement’s temperatures goals, its rulebook states that global greenhouse gas emissions must peak as soon as possible and then decline rapidly to reach net-zero emissions during the second half of this century.

Dr Rogelj, who was a coordinating lead author for the UN’s Intergovernmental Panel on Climate Change’s Special Report on 1.5C of Global Warming, says the report shows “significant benefits of keeping global warming to 1.5C compared to 2C”.

“For some areas like coral reefs, it’s the difference between dying bashfully or having a small chance of survival,” he adds.

“It (the report) also shows that 2C of warming for certain vulnerable countries and populations might be too much to still be able to pursue sustainable or economic development.”

The IPCC warned that without rapid and significant change, the world is heading for a 3C temperature rise by 2100 with potentially disastrous consequences.

A further goal of the treaty aims to increase the ability of countries to adapt to climate change.

Melting ice sheets due to climate change could lead to a 2.4-metre rise in sea levels, submerging a substantial number of islands and lowland regions.

Adaptation will be part of a five-yearly “global stocktake” – the first is due in 2023 – to assess the overall implementation of the agreement.

Its final objective plans to make finance flow consistent with the pathway towards climate resistant development – making it possible to achieve the temperature targets, reduce emissions and be able to adapt to the rise in temperatures.

With few concrete policies laid out in the treaty, Bayer believes it is “really unclear” as to how countries can adhere to the agreement under all those categories.

“Some people think of it is as a strength of Paris, as it gives governments the freedom to decide what they want to do and, obviously, financing options work differently for separate countries,” he adds.

“But, certainly if you have all those different measures being implemented by different countries, then it’s really difficult to assess where this will leave us with regards to reaching the goals.”

What is needed to finance the climate goals of the Paris Agreement?

It is no secret that building up the necessary climate finance to deliver on the targets remains a significant challenge.

A report by the International Renewable Energy Agency in April 2020 found that a “climate-safe path” would require cumulative energy investments of $110tn by 2050, while achieving full carbon neutrality would add a further $20tn.

But it highlighted that transforming the energy system could boost cumulative global GDP gains above business-as-usual by $98tn between 2020 and 2050.

At the COP16 convention in 2010, the Green Climate Fund (GCF) was formed to assist developing countries in adaptation and mitigation practices to limit the impact of climate change.

Although the GCF, which now serves as a financial mechanism to the UNFCCC, set a goal of raising $100bn a year by 2020, the fund currently sits at about $10.3bn.

“It’s heavily underpowered (the GCF) in terms of how much money it has available,” says Bayer.

“That just tells you how contentious and how uneager governments are to put money into those international and multinational funds to spend on climate projects.”

This is an area where the private sector may have a part to play in increasing global climate action investments to help deliver the agreement’s goals, but just how big that role could be still remains undetermined.

“The private sector is absolutely critical in achieving the targets,” says Dr Rogelj. “However, it needs to be shown a clear policy direction from governments, which can put in place incentives and long-term policy signals that drive private investments in innovation and the transformation.”

Participation from the private sector in low-carbon markets opens up the opportunity to address short-term development needs and could also ensure long-term stability for those markets.

The Climate Policy Initiative, an international climate think tank, estimates that private finance averaged $326bn a year in 2017 and 2018, accounting for 56% of the total climate finance in that period.

Paris Agreement issues to be resolved

As part of the treaty’s rulebook, one of the most contentious outstanding issues revolves carbon markets, which would allow countries to co-operate by trading their emissions allowances.

This comes under “Article 6” of the agreement. It proposes three separate mechanisms, two of which are centred on markets and the third of which covers non-market approaches to collaboration.

The first proposal foresees bilateral cooperation through “internationally traded mitigation outcomes”, which could include emissions cuts measured in tonnes of CO2 or kilowatt-hours of renewable electricity.

The second proposal envisages a new “international carbon market” to trade emissions cuts created by the public or private sector anywhere in the world.

The final mechanism describes a formal framework for climate cooperation between countries – with no accompanying trade in emissions cuts – such as through development aid.

“The key issue comes back to money, who pays, and how to set up the rules in a way where you don’t have any double counting of carbon emissions,” says Bayer.

“It’s been held up by particular interests of certain countries,” he adds. “That destroys the entire process of trying to implement rules for carbon markets internationally that would work, which is dissatisfying as carbon markets are a very good instrument to not only raise money but also reduce emissions in a cost-effective way.”

Brazil is the biggest nation accused of holding up an agreement on Article 6. The South American country argues that its forests should be counted as carbon sinks towards its national emissions targets, which would mean it can relax efforts to cut emissions in other areas.

But Brazil also believes it should be allowed to sell credits for keeping its forests intact, which critics see as double counting.

Research by the European Bank for Reconstruction and Development (EBRD) showed that across its operating regions – 38 economies in Europe, central Asia and the southern and eastern Mediterranean – the benefits of Article 6 may be considerable.

It states that collaboration under Article 6 could unlock economic benefits of $53bn across its regions by 2050 and $131bn by 2100, creating a cumulative virtual carbon market valued at $300bn by the end of the 21st century.

Due to the high stakes involved, the 2019 UN climate convention, COP25, in Madrid, Spain, was deemed a disappointment after negotiations around the implementation of Article 6 couldn’t reach an agreement.

It is now expected to be high on the agenda at COP26 in 2021. The conference will offer major economies an opportunity to build a green recovery beyond the coronavirus crisis and provide a fresh perspective on national and global climate action following the disclosure of updated NDCs.

“This is the first time updated targets need to be put forward,” says Rogelj. “It’s a huge milestone for the Paris Agreement because it will determine whether the idea and philosophy of updated and strengthened NDCs every five years actually works.”