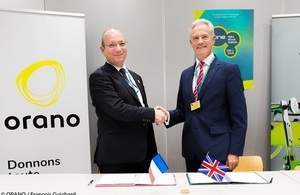 Following a declaration of intent to enhance collaboration in nuclear decommissioning, signed by the UK and French governments earlier this year, the NDA has developed Roadmaps of Collaboration with EDF SA and Orano.

The roadmaps will establish how the NDA will work with the 2 organisations to identify projects where they can share expertise and reduce the cost of decommissioning the civil nuclear legacy in the UK and France.

The UK and France have unrivalled expertise in the nuclear sector. These roadmaps set the direction towards a brighter future for us to work together with EDF SA and Orano, as we progress our decommissioning missions in the UK and France.
The NDA is responsible for the decommissioning and clean up at 17 nuclear sites in the UK, including 11 Magnox sites, the world’s first commercial nuclear power stations, and Sellafield, Europe’s largest and most complex nuclear site.