The Condor is the first phase of Mainstream’s 1.3GW Andes Renovables, which is claimed to be one of the largest wind and solar generation platforms in Latin America 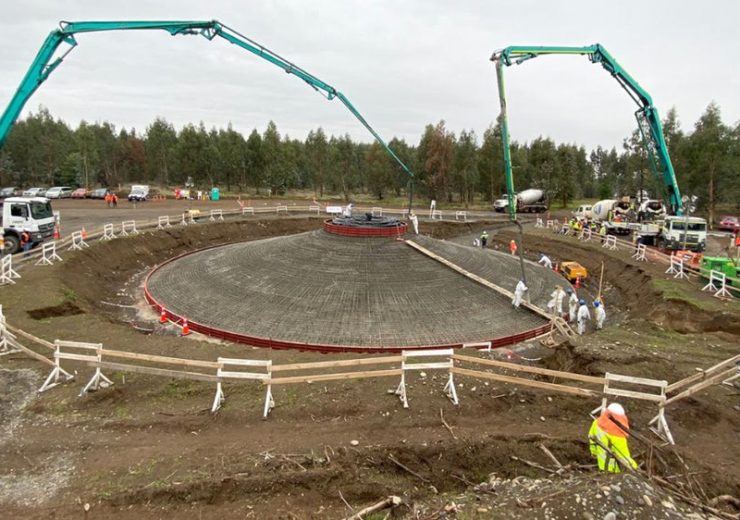 The pouring of the first concrete foundation at Alena marked the halfway mark in the build-out of this 18-turbine wind farm. (Credit: Mainstream Renewable Power.)

Mainstream Renewable Power (MRP) has announced the construction on its 571MW wind and solar portfolio in Chile has reached 30% completion.

The portfolio of projects, named Condor, comprises one solar and three wind farms that will commence operations in 2021.

The portfolio of projects is the first phase of Mainstream’s 1.3GW Andes Renovables, which is claimed to be one of the largest wind and solar generation platforms in Latin America and includes an investment of more than $1.8bn.

Mainstream Chile and Latin America general manager Manuel Tagle said: “Our company decided to invest in the country due to its great potential for the development of renewable energy, and with the conviction of lowering the prices of electricity generation in Chile.

“Today, our Condor portfolio – which reached US$580million financial close last November and represents a total investment of US$830million – is showing it is possible to be more sustainable and, at the same time, improve access to energy.

“With its construction we are helping to create 1,200 jobs when they are most needed, and when operational its average price of electricity generation will be 40% lower than that established in the previous tender.”

The projects in the Condor portfolio include the 157.5W Tchamma, the 86MW Alena and the 185MW Cerro Tigre wind projects that are currently being constructed in the Antofagasta region.

Recently, the firm has commenced work on the foundations for its Tchamma wind project in Chile.

Once operational in 2021, the power generated by Condor will be equivalent to supply enough electricity to 680,000 households, while offsetting more than 656,000 tonnes of C02 emissions annually.