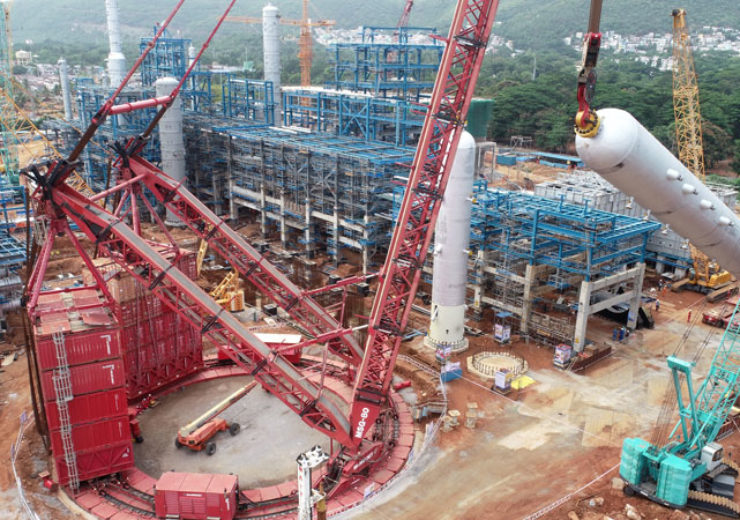 HPCL has been undertaking expansion and modernisation of the Visakh Refinery. Photo: courtesy of HPCL.

The residue upgradation facility will be part of the EPCC-03 Package of the INR209.28bn ($2.95bn) Visakh Refinery Modernisation Project (VRMP).

Under the contract, the Larsen & Toubro subsidiary will be responsible for the engineering, procurement, construction and commissioning (EPCC) of the new unit at the refinery located in Visakhapatnam, Andhra Pradesh.

In September 2018, HPCL gave a contract to Chevron Lummus Global (CLG), a joint venture between Chevron and McDermott International, to license its technology for the RUF plant.

The RUF unit, which will have a capacity of 3.55MMTPA, will help HPCL to convert heavy oils into Euro 6 diesel. The new unit will also simultaneously eliminate fuel oil production while increasing the feedstock and product flexibility, said LTHE.

The Larsen & Toubro subsidiary bagged the contract following an international competitive bidding on Lump Sum Turn Key (LSTK) basis. The company is already engaged in two packages of the modernisation project at the Visakh Refinery, under which it is executing a crude distillation unit/vacuum distillation unit and full conversion hydrocracker unit.

In June 2019, HPCL said that two reactors of the 3.053MMTPA full conversion hydrocracker unit were erected. Both the reactors were supplied by Larsen & Toubro.

LTHE MD and CEO Subramanian Sarma said: “L&T has a proven track record of over 25 years in the refinery and petrochemical sector and bagging this contract from HPCL reinforces our integrated capabilities in executing critical plants for the sector.”

HPCL has embarked on the Visakh Refinery expansion project with an objective to nearly double the existing refinery’s production capacity. The expansion of the refinery will also help the company to produce and distribute the Bharat Stage-VI (BS-VI)-compliant fuels.