Located at the border of Dubai and Abu Dhabi, the Jebel Ali discovery is estimated to contain up to 80 trillion cubic metres of natural gas reserves 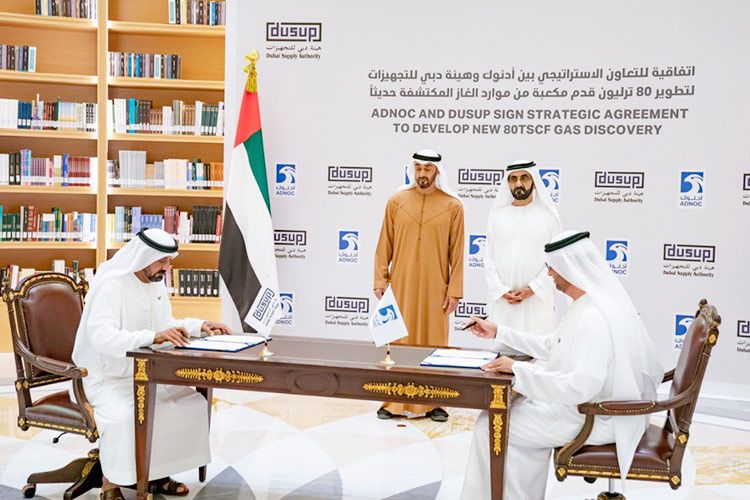 The “hugely significant” Jebel Ali natural gas field discovery at the border of Dubai and Abu Dhabi is the largest of its kind for 15 years.

Government officials from the two countries signed a collaboration agreement earlier today (3 February) for the development of the 5,000 sq km gas field – which is estimated to contain up to 80 trillion cubic feet of natural gas.

Analysts have said the discovery marks the world’s largest natural gas find since 2005.

The project will be jointly developed by the Abu Dhabi National Oil Company (Adnoc) and the Dubai Supply Authority (Dusup) – and is expected to support the United Arab Emirates’ (UAE) drive for energy self-sufficiency and long-term economic development.

Dusup director-general Sheikh Ahmed bin Saeed Al Maktoum said the partnership would enable the two companies to combine their expertise to obtain the “maximum possible value of hydrocarbon assets in the country”.

He added: “We look forward to working closely with Adnoc to continue exploring gas resources in the region between Dubai and Abu Dhabi to diversify our portfolio of energy resources.

“We are confident that this co-operation will contribute to ensuring energy security in the long term, which is an essential element in achieving our economic aspirations.”

Further exploration of the surrounding region will be conducted by Adnoc to assess the potential of additional resource capacity.

Analysts have said the “shallow” composition of the field – meaning the gas is located relatively close to the surface – should help to keep costs down as development of the project becomes a “pivotal” part of the UAE’s gas market.

“The shallow nature of the find will mean that development costs will be much lower than some of Abu Dhabi’s sour gas resources.

“A discovery of this scale will be a clear priority for development, but the timing will be dependent on where it fits into the UAE’s gas market.

“Large volumes of gas are associated with oil production, which is on the rise.

“In addition, Adnoc is pushing ahead with other major gas developments, such as the Hail and Ghasha project. The UAE will also need to honour its gas import commitments from the Dolphin Project.

“But longer-term, the field is likely to play a pivotal role in the UAE’s gas market and could lead to additional gas exports from the country.”