Citing safety issues and infrastructure limitations, producers across the biggest US oilfields continue apace with the practice of gas flaring, despite emission commitments 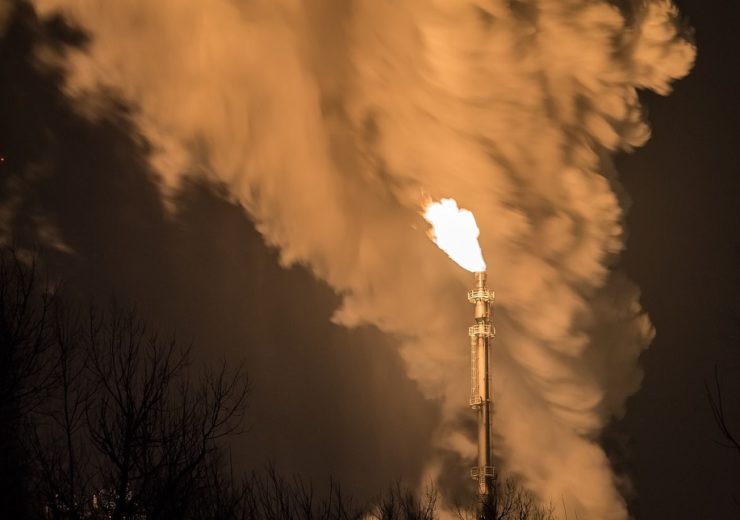 Despite environmental commitments to reduce carbon emissions, major oil producers are continuing a policy of routine natural gas flaring to dispose of the drilling by-product — lighting up the skies across Texas, New Mexico and North Dakota. Andrew Fawthrop takes a closer look.

Global oil giants face ever-increasing levels of scrutiny and public pressure over their responsibility to curb harmful greenhouse emissions, but in the sprawling oilfields adorning the landscape of Texas, New Mexico and North Dakota, an old industry trick of burning off unwanted natural gas is still a regular occurrence.

The practice known as “flaring” is a tactic used by oil hunters to dispose of the natural gas created as a by-product of their drilling operations – rather than capturing and transporting it for commercial or industrial use.

Despite natural gas being a viable fuel commodity, low market prices and the costs associated with its capture, transportation and taxation, mean companies have often opted to simply release it into the atmosphere – they are, after all, there for the crude oil concealed beneath the surface.

Mounting pressure on the oil industry about its environmental and climate impact has resulted in pledges from a number of organisations to reduce their flaring habits – but new research by Greenpeace’s investigative unit Unearthed reveals the practice remains a regular occurrence across the US’ “big three” oil fields, with oil majors ExxonMobil and BP among the worst offenders.

The Eagle Ford oil field in Texas, the Permian basin in Texas and New Mexico, along with the Bakken formation in North Dakota together accounted for 57% of all US oil production in 2018.

In the 12 months to March 2019, companies operating across these areas released 369 billion cubic feet (bcf) – roughly equivalent to the annual emissions of 10 coal-fired power stations – of natural gas into the atmosphere, either through flaring or venting (releasing the gas without burning).

That is according to data collected by independent industry research organisation Rystad Energy.

ExxonMobil was found to be the biggest culprit for flaring and venting since 2011, emitting 99 bcf of gas, while performance at the Permian drilling operations acquired by BP last year – already among the worst for flaring in the basin – has declined further since the UK oil giant took control in March.

Between April and 2018 and March 2019, ExxonMobil either vented or flared 12 bcf of natural gas in the Permian alone – more than any other company.

“Industry claims to support methane regulation look like greenwashing – old bad habits from an industry that has spent decades trying to deceive the public about climate change.”

ExxonMobil and BP among the biggest emission culprits, despite environmental commitments

Both ExxonMobil and BP have made commitments to reduce the carbon footprint of their respective operations as part of the global effort to address climate change.

As members of the Oil & Gas Climate Initiative (OGCI), each has signed up to the organisation’s joint climate strategy – of which the reduction of routine flaring is a core tenet.

But analysis of industry data reveals that despite its pledge to reduce flaring by 25% by 2020, ExxonMobil’s natural gas dumping in the trio of US oil basins grew by 70% between 2017 and 2018 – even though gas production rose by only 15% over the same period.

At BP’s newly-acquired operations in the Permian basin, meanwhile, the proportion of gas that was flared or vented increased from 12% in February to 18% in May – a period covering the first three months of its full ownership of the site.

“We are committed to reducing our flaring in the Permian basin,” a BP spokesperson told Unearthed.

“Since BPX Energy began operating our newly-acquired assets in March of this year, we have started constructing centralised facilities which, combined with some of our other emissions reduction efforts, will reduce routine flaring.”

And an ExxonMobil spokeswoman added that in the examples cited, “flaring is done for safety reasons or because the gas cannot be used due to barriers to the development of gas markets and gas infrastructure.”

One of the biggest disincentives for oil producers from capturing the natural gas they produce when drilling is cost of moving it away from the oil basins.

It requires pipeline infrastructure, and a means to turn it into a liquid state for transport.

The recent launch of the Gulf Coast Express pipeline is expected to help alleviate some of these pressures in the Permian region from the latter part of the year, although the immediate impact could be offset by the launch of new projects.

Rystad Energy head of shale research Artem Abramov explained: “It should be noted that the significant number of new well connections in the second half of 2019 might result in a sustained high flaring level, because from an operational perspective, associated gas flaring is normal in the first two weeks following an oil well completion.”

In North Dakota, Abramov noted a high level of flaring this year that has “never been seen before”, both in absolute terms and as a percentage of production – and twice the level the state targets under current regulations.

Almost 300,000 acres of the Bakken formation in North Dakota is held by Marathon Oil – a US gas and petroleum company that specialises in fracking.

In the 12 months to March, Marathon Oil flared or vented more than 25 bcf of natural gas, over half of the amount it produced in that period.