Geopark to acquire stake in Llanos 94 block in Colombia 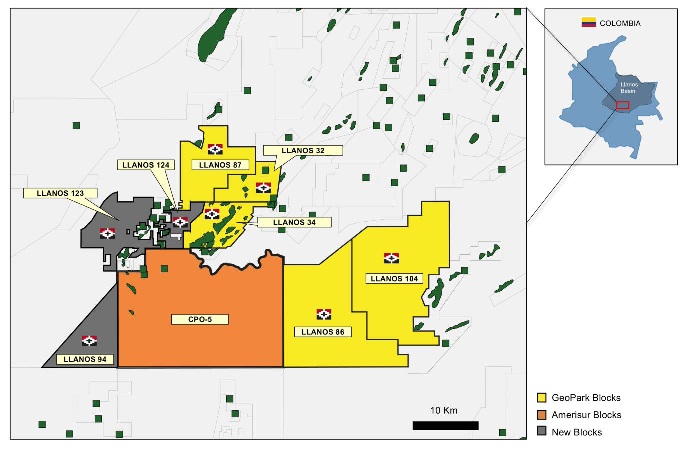 Oil and gas exploration company GeoPark has signed an agreement with Parex Resources to acquire a 50% working interest in the Llanos 94 block in Colombia.

Under the terms of the farm-in agreement, GeoPark will acquire the stake in exchange for funding Parex’s 50% pro-rata share of existing commitments.

GeoPark and Hocol awarded the Llanos 123 and Llanos 124 blocks

Additionally, GeoPark has been awarded the Llanos 123 and Llanos 124 blocks in partnership with Ecopetrol’s subsidiary Hocol as part of the second round of permanent process for the assignment of areas (PPAA) in Colombia.

The bidding round was launched by Colombia’s hydrocarbon regulatory authority, Agencia Nacional de Hidrocarburos (ANH). The final contracts are planned to be signed in December 2019 or early 2020.

GeoPark said that the acquired blocks represent low-risk, high potential exploration acreage in the Llanos basin near its Llanos 34 block. The blocks are surrounded by multiple producing oil and gas fields and existing infrastructure.

GeoPark will operate the two blocks with 50% stake while Hocol will own the remaining 50% interest. The Llanos 123 and Llanos 124 blocks are also located adjacent to GeoPark’s Llanos 34 block.

With multiple oil prospects and leads already identified at the blocks,  GeoPark and its partners are currently undertaking geoscience evaluation with field operations scheduled to commence in 2020.

Additionally, Amerisur Resources, which is due to be acquired by GeoPark as part of a deal signed in November 2019, has also been awarded the PUT-36 block as part of the PPAA.

The transaction is scheduled to be completed in January 2020, subject to the approval of Amerisur shareholders and customary regulatory approvals.

GeoPark CEO James Park said: “Congratulations and thanks to our partners, Hocol (a 100% subsidiary of Ecopetrol) and Parex, and to our Colombian team for successfully acquiring these highly attractive, low-cost blocks – which further strengthen GeoPark’s leading acreage position in the Llanos basin – specifically surrounding our prolific Llanos 34 block.

“Subject to the closing of the Amerisur acquisition, the new Putumayo block helps leapfrog GeoPark into one of the leading land holdings in the high potential underexplored and underdeveloped Putumayo basin.”