The 480MW Saint Nazaire offshore wind farm will be powered by 80 of GE’s wind turbines, each with 6MW of capacity 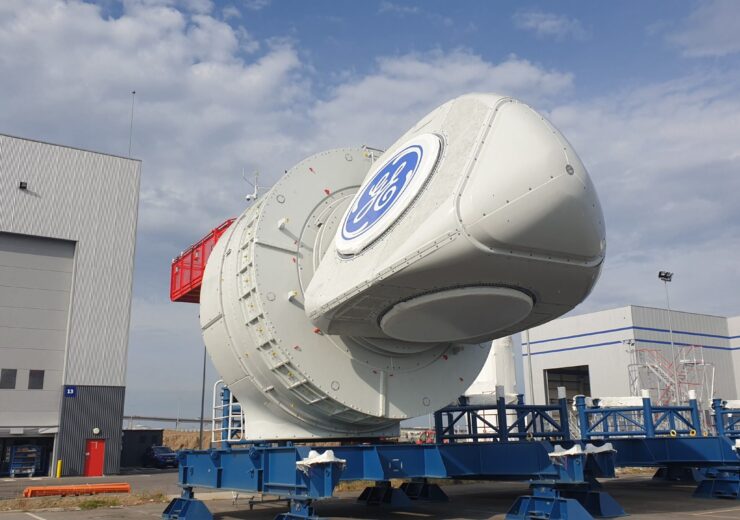 The nacelle is the first in a series of Haliade 150-6 MW wind turbines, which will be supplied for the 480MW Saint Nazaire offshore wind farm.

The turbines will be assembled by GE Renewable Energy at the Montoir-de-Bretagne production site in France.

Located between 12 and 20km off the coast, the Saint Nazaire wind farm has been under construction for one year and will be powered by 80 wind turbines.

GE Renewable Energy president and CEO Jérôme Pécresse said: “I am proud to celebrate today, along with local authorities, our partners EDF Renewables and Enbridge, and our employees, a new stage in the construction of the first French offshore wind farm in Saint-Nazaire.

“At GE Renewable Energy, we are excited to be engaging our skills and know-how in this historic project.

“By producing these 80 Haliade 150-6MW wind turbines, we enhance our contribution to consolidating the French wind farm industry, a competitive, exportable industry with long-term prospects, and that generates employment.”

The French offshore wind farm will be operational in 2022

The French offshore wind farm is expected to generate more than 1,000 local jobs during the construction phase, adding significantly to the region’s economic activity.

While GE is producing the turbines, finalisation of earthworks is taking place to store and assemble the wind turbine components in the port of Saint-Nazaire.

Installation at the sea is expected to begin next year, starting with anchoring of the foundations and burying the interturbine cables, followed by installation of the electric substation during the summer.

In spring of 2022, the turbine is expected to be installed and commissioned, with the site becoming operational by the year-end.

When completed in 2022, the offshore wind farm is expected to generate enough power to supply 20% of the electricity consumed by the Loire-Atlantique department.

EDF Group renewable energies senior executive vice-president Bruno Bensasson said: “We are very happy to be present today to witness the tangible progress of the first offshore wind farm in France, with the production of its first nacelle.

“This wind farm project off the coast of Saint Nazaire, which we have been working on for several years, belongs above all to the Pays de La Loire Region which has contributed greatly to the creation of a new French industry.

“Over 1,000 region residents will participate in this project. This offshore wind farm constitutes a big step forward for renewable energy development in France.”