The green hydrogen project will be developed near Sierra Grande, which has a history of iron ore production 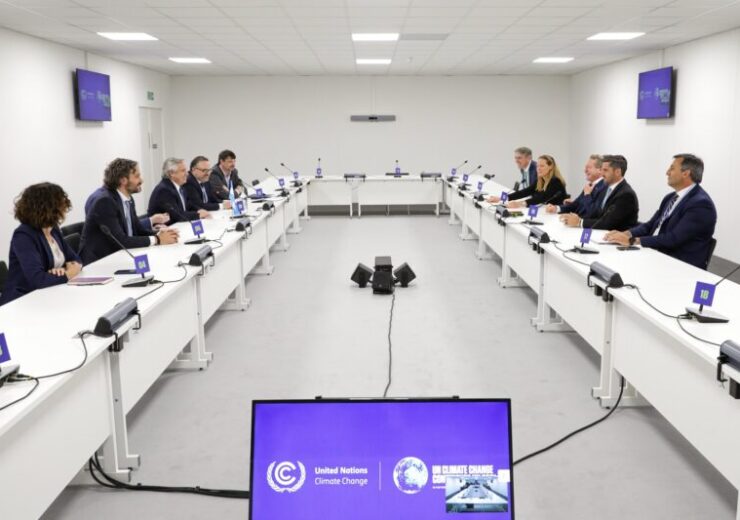 Meeting between the officials of Fortescue Metals and the Argentine government regarding the green hydrogen project. (Credit: Government of Argentina)

The Argentine government has disclosed that iron ore company Fortescue Metals Group plans to invest $8.4bn to produce green hydrogen at an industrial scale in the country.

An announcement in this regard was made during the ongoing COP26 world summit in Glasgow, Scotland following a meeting held by the company’s officials with the Argentine President Alberto Fernández.

Fernández said: “Argentina has a great opportunity ahead and it needs companies like this, that invest and generate work.

“Green hydrogen is one of the fuels of the future and it fills us with pride that Argentina is one of the countries that is at the forefront of the ecological transition.”

Fortescue Metals is said to have already started prospecting work in the province of Río Negro. Its investment is expected to generate over 15,000 direct jobs and between 40,000-50,000 indirect roles.

The prospecting that the company has launched is said to be based on assessing both the quantity and quality of winds in the region, which will be the primary energy source for production.

The green hydrogen project will be developed in three stages.

According to the government, a pilot stage will be taken up with an investment of $1.2bn for confirming the planned capacities. It will produce nearly 35,000 tonnes of green hydrogen, which is equivalent energy to meet the needs of 250,000 homes.

The pilot stage will start next year and end in 2024. It will be followed by the first productive stage with an estimated investment of $7.2bn.

Fortescue Metals will aim to produce nearly 215,000 tonnes of green hydrogen in the first productive stage, which is equivalent energy capacity to meet the electricity consumption needs of 1.6 million homes. This stage will run until 2028.

The Argentine government said that Río Negro will be transformed into a global green hydrogen export hub by the end of this decade.

The province will see a production capacity of 2.2 million tonnes per year, which will cover an energy production equivalent to, for example, nearly 10% of the electrical energy used by Germany in one year.

Fortescue Metals president Andrew Forrest told the Argentine President: “We are ready to invest in Argentina, we are a cutting-edge energy company that hires people and trains people, and that is what we want to do in your country. We are here so that Argentina is a world leader in renewable energy and to be an exporter.”

The green hydrogen project will be developed near the city of Sierra Grande, which has a history of iron ore production, said the government.

Under the MoU, FFI will sell 10% of its global green hydrogen production to the two UK-based firms.