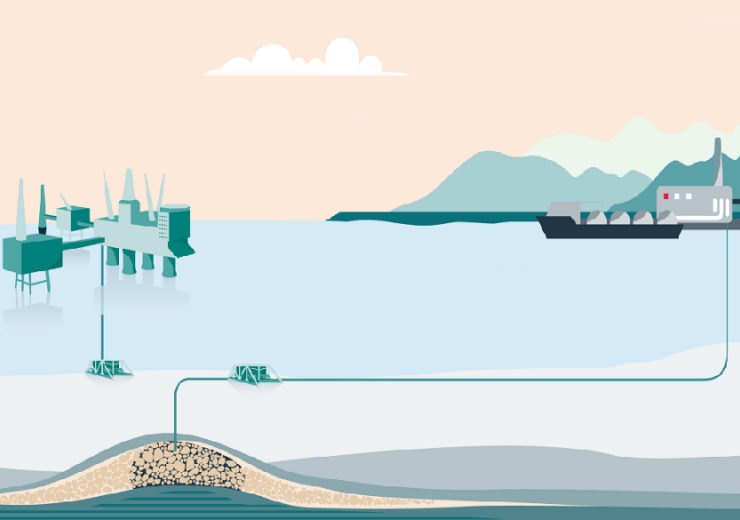 Captured carbon emissions will be processed and taken offshore, to be injected 2,600 metres beneath the North Sea floor (Credit: Equinor)

The venture comprises the transportation and storage component of the $2.7bn Longship project, which aims to become a full-scale CCS value chain in Norway.

Northern Lights will have an initial capacity to handle up to 1.5 million tonnes of carbon dioxide annually, sequestering captured emissions 2,600 metres below the floor of the North Sea off the country’s western coast.

The commercial partners – oil majors Equinor, Total and Royal Dutch Shell – signed off on an initial $675m budget for the project earlier this year, and the Norwegian government today gave its approval in parliament.

“Carbon capture and storage is important to achieve the goals of the Paris Agreement,” said Tina Bru, Norway’s minister of petroleum and energy. “Longship is the largest climate project ever in the Norwegian industry and will contribute substantially to the development of CCS as an efficient mitigation measure.”

Equinor CEO Anders Opedal added that Northern Lights will be a first-of-its-kind operation to cut emissions across Norway and Europe.

“We are ready to start realising this project that will be an important part of the climate solution,” he added. “I want to thank the Norwegian government and for the broad political support in making this a reality.”

Northern Lights will be a ‘cross-border’ CCS project

Northern Lights will include a CO2-receiving terminal in the Naturgassparken industrial area in Øygarden, Western Norway. From there, carbon will be transported offshore by newly-designed ships and injected into storage reservoirs beneath the seabed.

The first phase of the project, which will primarily service Norwegian industries, is expected to be operational by 2024. There are plans to expand the processing capacity to five million tonnes per year, enabling businesses from elsewhere in Europe to make use of the infrastructure.

“Northern Lights is designed to provide a service to industrial emitters who can now take action on emissions that can’t be avoided,” said Shell’s chief executive Ben van Beurden. “This is key to bringing real progress towards tackling climate change.”

Carbon capture and storage is expected to grow in scale over the coming years as a tool for carbon-intensive industries to mitigate their emissions. It can also be used in conjunction with hydrogen production, creating so-called “blue” hydrogen that is produced using natural gas.

Both technologies are expected to feature in the European Union’s decarbonisation efforts, with the region having recently upgraded its emissions-reduction target to a 55% cut by 2030, relative to 1990 levels.