The innovative gravity-based energy storage technology achieved full power in the demonstration project, and the company is now preparing to take the system to market 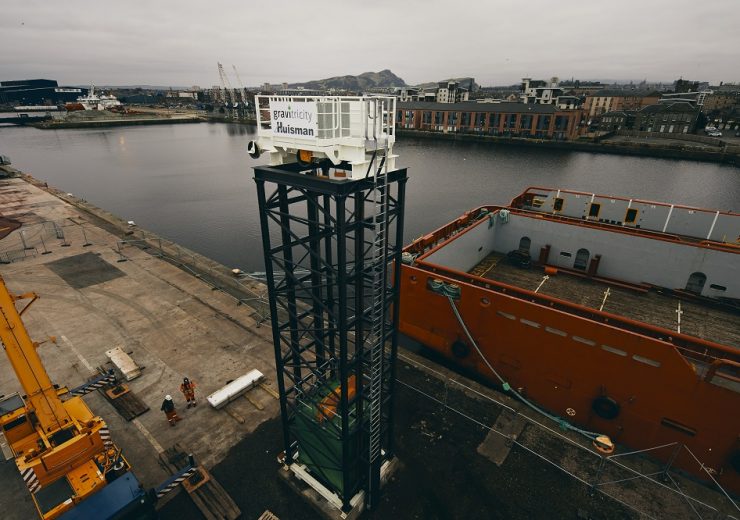 The Gravitricity demonstration project has been built in the Port of Leith, Edinburgh (Credit: Gravitricity)

UK energy storage innovator Gravitricity has successfully delivered power at its demonstration project in Edinburgh, Scotland, paving the way for a commercial roll-out of its technology worldwide.

The company’s system relies on hoisting heavy weights up tall vertical shafts, effectively storing potential gravitational energy, and then releasing them on demand when required.

This provides “a cost-effective, long-life alternative to lithium-ion batteries”, the firms says, without the need to extract quantities of rare earth metals, like cobalt, lithium or nickel, used commonly in other forms of battery-based storage.

The 250 kilowatt (kW) demonstrator project, which has been built above ground at the Port of Leith, generated full power using two 25-tonne weights, and verified the system’s speed of response as less than one second.

Commercial iterations of the technology will be installed underground – in existing abandoned mine shafts, or purpose-sunk shafts – and will have a capacity of 4-8 megawatts (MW).

Gravitricity in talks over initial locations for first commercial project

Analysts are expecting a boom for energy storage over the coming years, as demand for grid balancing increases due to changing consumption patterns and a rising integration of variable renewables into the network.

BloombergNEF has estimated a $620bn market by 2040, while WoodMackenzie says global storage capacity exceeded 27 gigawatt hours (GWh) in 2020 and is on track to grow to more than 729 GWh by 2030.

Gravitricity is now in “advanced discussions” with mine owners in the UK, Scandinavia, Poland and the Czech Republic over possible locations for its first European projects, while also looking to advance a development in South Africa.

It says its system offers a 25-year operational life with no loss in output or degradation over time.

Blair added: “We’ve proven we can go from zero to full power in less than a second – which can be extremely valuable in the frequency response and back-up power markets – plus our ability to continuously vary power output dependent on demand.

“In the coming months we’ll be running tests with the two single weights, dropping one after the other to verify smooth energy output over a longer period.”

Gravitricity has developed its demonstration project with the help of UK government funding, and has also raised around £775,000 ($1m) via crowdfunding campaigns.

In 2019, the company commissioned a study by researchers at Imperial College London, which found the gravity-based system could store electricity at half the lifetime cost of lithium-ion alternatives.