The Ghazeer field is the second development phase of the substantial Block 61 resource in Oman, which BP says can supply 35% of the country's gas demand 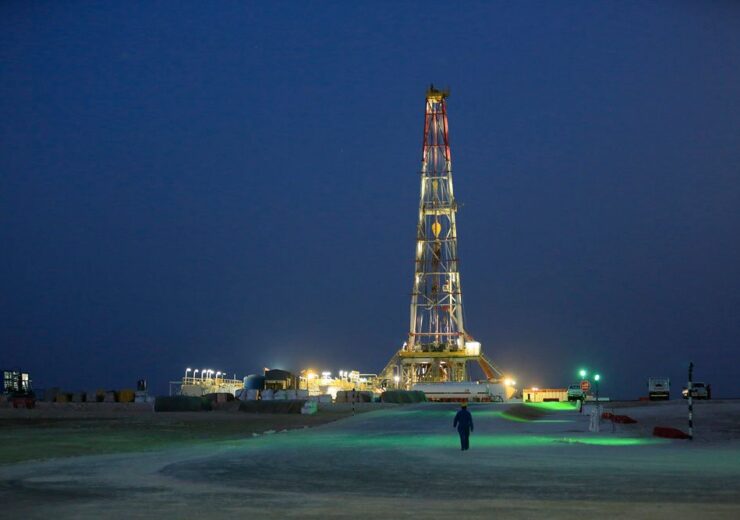 A drilling rig at the Khazzan field in Oman - the first phase of development at Block 61 (Credit: BP)

BP has started production at the Ghazeer gas field in Oman, four months ahead of schedule.

It is the second phase of development at Block 61 – one of the Middle East’s largest tight-gas accumulations – expanding on the Khazzan venture, which delivered first production in 2017.

The project has been developed in partnership PC Oman Ventures, a subsidiary of Malaysian oil and gas firm Petronas, as well as Oman’s state-backed Makarim Gas Development.

In tandem with the Khazzan field, BP says Ghazeer has the potential to supply around 35% of the country’s entire natural gas demand.

Block 61 has an overall expected production capacity of 1.5 billion cubic feet (bcf) per day, as well as daily output of 65,000 barrels of associated condensate.

“The start-up of Ghazeer is an important milestone in our strategic partnership with Oman, delivering critical national infrastructure for the Sultanate,” said BP chief executive Bernard Looney.

Oman’s energy minister Dr Mohammed Al Rumhy added: “The gas from Ghazeer will contribute towards Oman’s 2040 vision in terms of providing additional energy to local industries, as well as diversifying the economy.”

BP has had an upstream presence in Oman since 2007.

Recent focus on BP has centred on its new strategy to diversify away from traditional oil and gas businesses as it targets net-zero emissions by 2050, and to establish a bigger presence in renewable energy sectors.

But the expansion of activity at Block 61 is a reminder that hydrocarbons will still play a major role in the UK oil major’s strategy in the near term.

Last year, BP signed an agreement with Italian oil firm Eni and the Omani government for a “significant new exploration opportunity” at Block 77, located around 30km east of Block 61.

Looney said: “When we introduced our plans to reinvent BP, we were clear that to deliver them we have to perform as we transform. There are few better examples of how we are doing just that than Ghazeer.

“This project has been delivered with capital discipline four months early, wells are being drilled in record times and safety performance has been excellent. It exemplifies what a strong and resilient hydrocarbons business looks like – a core part of our strategy.”

The development of Ghazeer has been a major infrastructure project in Oman, and BP says Omani-registered companies were used for more than 85% of all project spend.

More than 130 wells have already been drilled at the gas field, with more planned over the lifetime of the project.

BP added that wells at Ghazeer were tested and completed using a “green completions” process, by which the gas produced while testing is routed directly to the production facility – rather than flared at source which has been the historical norm.

The company says this process has prevented more than 200,000 tonnes of carbon dioxide emissions from its operations since introduced in 2019 – the equivalent of removing 44,000 combustion-engine vehicles from the road each year.