The royalty and streaming company will be entitled to get 22.82% of all the cobalt produced from the Canadian mine 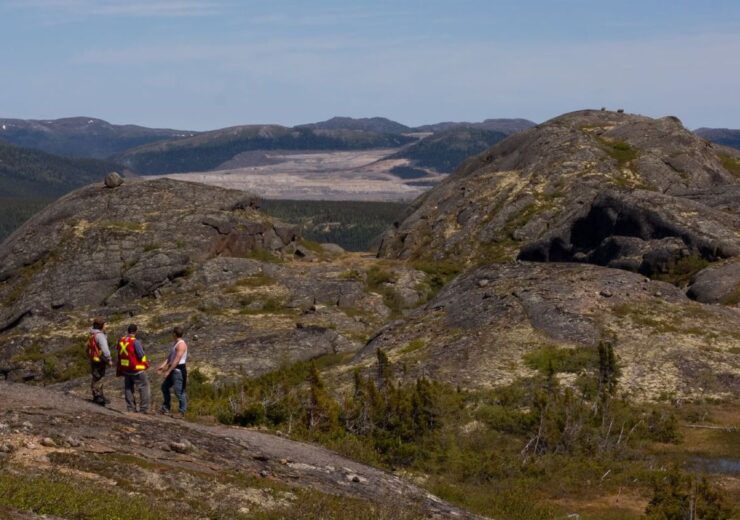 Three geologists in Labrador, Canada; the Voisey's Bay Mine is in the background. (Credit: Joshua Duggan/Wikipedia.org)

Anglo Pacific Group has signed a deal worth up to $232m with private equity sellers to secure a 70% net interest in a stream on cobalt production from Vale’s Voisey’s Bay mine in Canada.

The all-cash deal will see Anglo Pacific acquire a holding company, which holds the net interest in the stream.

The consideration is made up of an amount of $205m to be paid at the time of closing and a contingent payment of up to $27m.

Voisey’s Bay is a nickel-cobalt-copper mine in the Labrador region, which has been producing since 2005.

Through the deal, Anglo Pacific will receive 22.82% of all the cobalt produced from the Voisey’s Bay mine till the time 7,600 tonnes of finished cobalt has been delivered. After which, the stream will be reduced to 11.41% entitlement.

The UK-based royalty and streaming company said that the deal will give it a considerable long-life revenue stream from an established operation. Besides, it significantly progresses its goal to focus on 21st century commodities that support a more sustainable world.

Furthermore, Anglo Pacific said that 61% of the royalty portfolio will be attributable to materials used for making batteries and would considerably cut down its exposure to coal.

Anglo Pacific CEO Julian Treger said: “Along with the recent additional investment in Brazilian Nickel, the Group’s net asset profile will consist of 61% base metals on a pro-forma basis and we continue to have the option to invest a further US$70m into its Piaui nickel royalty.

“The transaction is expected to be immediately earnings accretive and provides exposure to a market that is fueled by the fast-growing future demand for electric vehicles. Voisey’s Bay is located in a well-established mining jurisdiction and represents one of the largest sources of cobalt outside of the DRC.”

Subject to the satisfaction of customary conditions, the deal is expected to close next month.

In December 2020, Anglo Pacific agreed to acquire a 2.1% stake in Brazilian Nickel, which is focusing on developing the Piauí Project in Brazil.