Heerema's Thialf lifting vessel was used by Aker BP to place the 2,000t topsides on the jacket at the Valhall field 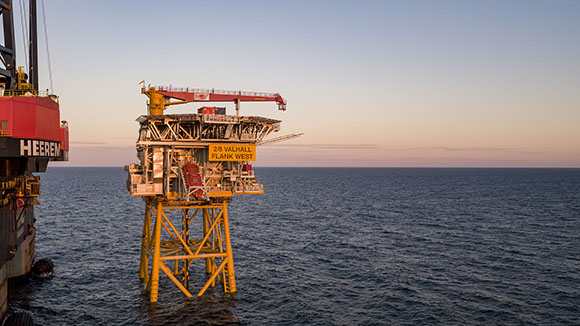 Norwegian oil exploration and development company Aker BP has completed the installation of the Valhall Flank West topsides on the Valhall field, located south of the Norwegian sector of the North Sea.

The Heerema’s Thialf lifting vessel was used to place the 2,000t topsides on the jacket at the field, which consist a total of six platforms and a field centre, as well as two unmanned flank platforms.

Aker BP CEO Karl Johnny Hersvik said: “This is probably the most complete platform ever installed in the North Sea. All planned construction work is complete and just 7% of the commissioning phase remains. I am truly impressed by the job the alliance has done here.

“Compared with similar projects, we have seen substantial reductions in cost, engineering hours and construction of the topsides and jacket. Quality has been delivered from day one of the project, and we have not experienced any serious injuries.”

The Valhall Flank West is the first platform to be delivered under a wellhead alliance between Aker BP, Aker Solutions, Kværner, and Swiss technology multinational ABB.

Aker BP said it aims to produce additional billion barrels during the next 40 years at the Valhall field, which has already produced one billion barrels since its production commencement in 1982.

Production from Valhall Flank West to start in Q4 2019

Valhall asset manager Per Mikal Hauge said: “Valhall Flank West is an important contribution to ensure that we achieve our ambition. The field can contribute around 60 million barrels of oil equivalents to Valhall’s production.

“The West Flank has capacity for another six wells, and we are now looking into the possibility of more wells and increased value creation from the field.

“There is high activity on the Valhall field. Last week, we removed QP from the field centre, the first of three old platforms that will be taken away. We are also investing in the future of the field with new wells and plugging of shut down wells.”

Aker BP plans to commence production from the Valhall Flank West in the fourth quarter of this year.