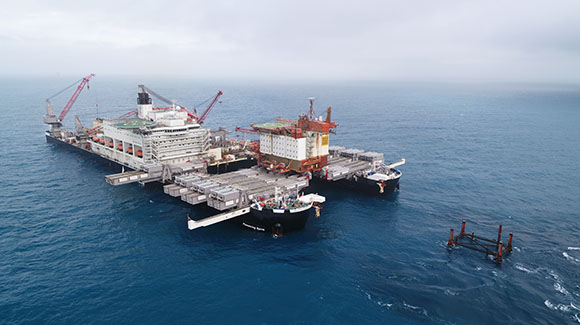 Aker BP said that the original accommodation platform (QP) at the Valhall oil field in the southern Norwegian North Sea has been removed by Allseas’ Pioneering Spirit vessel.

The Valhall (QP), which weighs 3800 tonnes, is the first of the three original structures at the Valhall oil field, that have been scheduled to be uninstalled as part of modernising the field centre. The other two platforms to be removed are the process / production platform (PCP) and a drilling platform (DP).

The injection platform (IP), wellhead platform (WP) and the new process / accommodation platform (PH), which are the remaining platforms at the Valhall field centre and the two unmanned flank platforms will continue to be in production.

While the WP and the IP platforms were installed recently, the PH platform has been in production since January 2013.

Removal of the QP topsides is the first task carried out by Pioneering Spirit under an agreement signed by Allseas with Aker BP in 2017 to deliver transport, installation and removal services for the offshore Norwegian oil field.

Allseas, in a statement, said: “Today’s lift successfully concludes two years of engineering, planning and pre-lift preparations, which ended last month with the installation of lift rigging for the bridge and cutting of the platform legs. The castellated cut shape, combined with pre-installed custom made leg restraints, prevented any possible topsides movement prior to the lift.”

The QP topsides will sail to the Kvaerner disposal yard at Stord for its disposal. The 109 tonne bridge that connected the QP topsides to the neighbouring drilling platform was also removed by Pioneering Spirit using one of its cranes.

Aker BP Valhall asset vice president Per Mikal Hauge said: “Together with Allseas and the team at Pioneering Spirit, we have successfully concluded two years of engineering, planning and pre-lift preparations. The safe and efficient removal of the QP platform is an important milestone for Valhall and for Aker BP.”

The Valhall oil field complex, which is located nearly 280km off the Norwegian coast, is made up of the six steel, bridge-connected platforms that were installed in 70m of water depth.

Discovered in 1975, the Valhall field was brought into production in 1982. Aker BP holds a stake of 90% and is partnered by Norwegian oil and gas firm Pandion Energy, which acquired the remaining 10% stake in December 2017 from the former.