Expected to begin commercial operations by the end of 2026, the wind project will meet the electricity requirements of over a million households 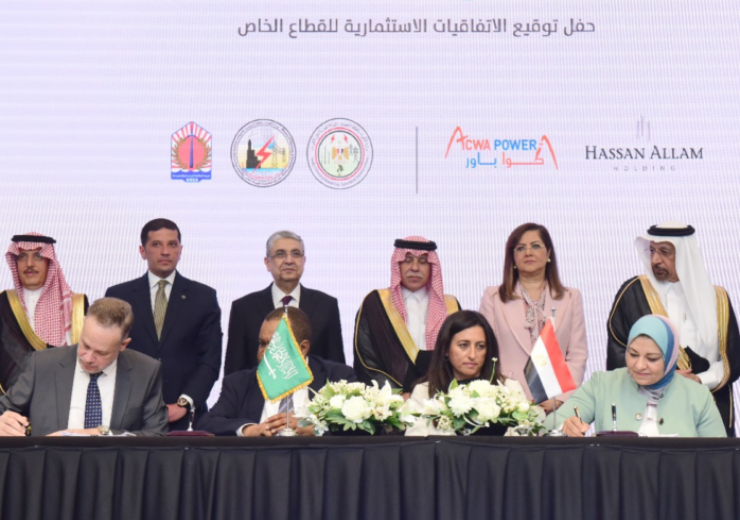 ACWA Power and others signing the agreement pertaining to the 1.1GW wind project in Egypt. (Credit: ACWA POWER)

An ACWA Power-led consortium has signed a project agreement to build a 1.1GW onshore wind project in Egypt, which involves an investment of $1.5bn.

The consortium also comprises Hassan Allam, an Egypt-based construction engineering company. It will work together during the development stage to undertake the site studies and secure the financing for the project.

Egyptian Minister of Electricity and Renewable Energy Mohamed Shaker El-Markabi said: “This milestone wind project falls within the framework of the Egyptian government’s strategy to diversify its energy sources and leverage the country’s rich natural resources, especially in renewable energy.

“The Ministry of Electricity and Renewable Energy is taking concrete actions to ensure the resilience of our energy strategy, because of the escalating changes that the world is witnessing, which aim to increase the contribution of renewable energy to up to 42% by 2035.”

According to ACWA Power, the proposed wind project will be located in the Gulf of Suez and Gabal el Zeit area. The project is expected to reach financial close by Q3 2024.

After entering into commercial operations by the end of 2026, the wind project will meet the electricity requirements of over a million households. Besides, it will offset 2.4 million tonnes of carbon dioxide emissions per year.

The wind turbines of the project will have a tip height of up to 220m, which is said to be the highest in Gulf of Suez. This will help in achieving the optimum use of the designated land plots in the most efficient manner, said ACWA Power.

ACWA Power chairman Mohammad Abunayyan said: “We are honoured to contribute to the strengthening ties of Saudi Arabia, our home, and Egypt via this milestone wind project, and extend our sincerest gratitude to the leaders of both countries in entrusting their faith in our abilities to realise their renewable energy mandates.

“With sustainable development at the top of the agenda for both states, progress cannot be made without concerted efforts in expanding infrastructure that is underpinned by renewables.”

The proposed wind project will be the third for ACWA Power in Egypt following the 120MW Ben Ban solar power projects in the Aswan region and the 200MW Kom Ombo solar plant.