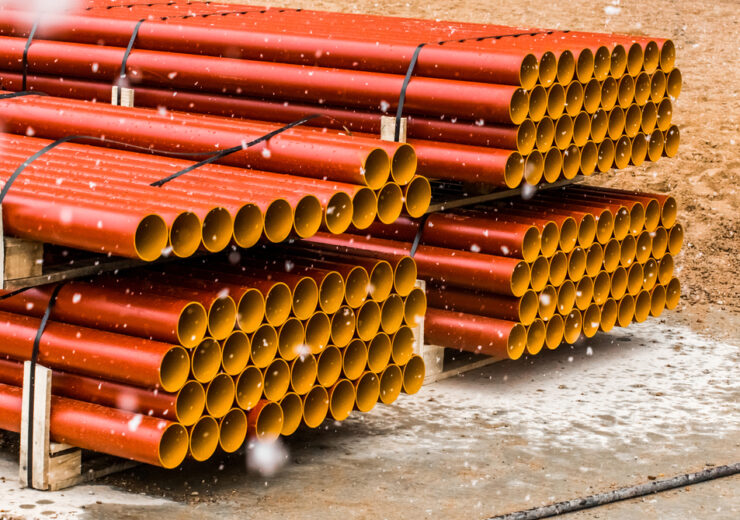 Pipeline corrosion costs the oil and gas sector $1.37bn a year to fix, a figure that’s on the rise amid use of metal pipes and increased recovery rates from older fields. The replacement of steel with thermoplastic, however, promises to significantly reduce these costs. World Expro writer Greg Noone talks to Ramin Moslemian, a principal specialist in fracture mechanics and non-metallics at DNV GL, about how, when it comes to pipes, plastic is perfect.

There was a day when steel was but a glint in the metallurgist’s eye – a refined but rare formulation, reserved for swords and suits of armour and later, when men began to prefer bullets over blades, cutlery and tools.

After the invention of the Bessemer process in the 1850s – whereby air was blown on to molten pig iron, burning out the carbon and silicon still in the white-hot gloop poured from the furnace – steel began appearing everywhere. Its innate strength made it ideal for cladding warships, rails on railways and to act as the skeleton for buildings that seemed to grow taller with every passing year.

It made sense, therefore, as the oil industry gradually ventured out to sea in the late 1940s, for offshore structures and pipes to be made of steel. Over time, however, its vulnerability to corrosion became clear, exacerbated in pipework by the popularity of water injection methods in hydrocarbon extraction.

The use of corrosion inhibitors could only delay, not prevent, the replacement of steel equipment wholesale. Even now, the cost of this approach remains significant: up to $1.37bn across the entire sector, according to NACE International.

As early as the 1960s, however, oil operators began experimenting with new materials that would allow them to sidestep this wasteful cycle completely. They began with plastic polymers, lining the interiors of pipes so that if the hard steel exterior rusted away, at least the vital component carrying the liquid would remain intact.

It’s a solution that has continued to be adopted until the present day, according to one of DNV GL’s leading experts on composite materials in offshore oil and gas, Ramin Moslemian. “The polymeric liner is really working as a pressure-containing part of the pipe,” explains the organisation’s principal specialist in fracture mechanics and non-metallics. “But since then, there has been some effort to use composites for pipes.”

These wholly-plastic pipes utilised thermoset-based composite parts and have since been used in everything from water transportation to onshore applications. Epoxy-based systems, using mainly glass but sometimes carbon fibres, were for many years the main alternatives to their steel antecedents and ideal for use in large-diameter piping.

A notable success in this area came from the installation by Equinor – then named Statoil – of composite-based riser joints at one of its North Sea platforms in the late 1990s. “They have been there for two decades,” says Moslemian. “It’s probably one of the longest-serving critical applications of composite materials in the offshore oil and gas industry.”

After the advantages of thermosets became known, however, innovation in this area stagnated. Thermosets were useful but brittle and, therefore, difficult to spool and store on board an oil rig. “The industry was happy with just using what they had,” says Moslemian. “The price was quite high. There was not much incentive, maybe, to save using those technologies.”

It wasn’t until ten years ago that a new alternative entered the market – thermoplastic composite pipes.

Even then, it had been a slow route from trial to sale. “The first trials were 20 years ago,” explains Moslemian, and resulted in what is now referred to as reinforced thermoplastic pipes (RTP). “These were unbonded systems in which you had an internal plastic liner – typically a polyethylene liner – [that had] fibres or tape around it. Then you finish with another polyethylene cover.”

RTPs were mainly used in onshore applications, as they could not cope with the increased external pressures encountered in deepwater applications. The challenge, therefore, was to create a fully-bonded version of the same product that was suited for use in this extreme environment.

The result was the fully-bonded system that most scientists and operators are referring to when they mention thermoplastic composite pipes (TCP).

Essentially a resin system, thermoplastic polymers can elongate with ease, allowing the pipe itself to be spooled. The invention of a fully-bonded version meant that, not only could the product be stored easily on a ship or rig, but it could cope adequately with the kinds of pressures associated with deepwater applications.

Crucially, TCPs are also light – practically featherweights compared with their steel counterparts. “In a typical application offshore – a riser, for example – there is a 50–60% reduction in weight, which will allow you to utilise, for example, smaller vessels,” says Moslemian. This is complemented by the variety of ingredients available for the plastic formulation.

“The price of them would vary a lot,” concedes Moslemian, as do the advantages they confer on the resistance of the end product to high-temperatures and pressures.

Polymers on the higher end, such as PVDF (polyvinylidene difluoride) or PEEK (polyether ether ketone), can accommodate extremely high temperatures of up to 120°C. Meanwhile, cheaper alternatives like polyethylene and PA12 (Polyamide 12) are only able to withstand environments of up to 60–80°C respectively.

Even so, they are not without their advantages.

“For many applications, like water injection, for example – where you don’t expect high temperatures – they are ideal candidates, because they’re not very expensive and they can really accommodate the problem that you’re facing,” says Moslemian.

More and more oil majors are in agreement. “We see potential for the use of TCP as an intrinsically non-corroding and spoolable lightweight pipe that can be used in a range of static and dynamic deepwater applications,” said Krassimir Doynov, ExxonMobil’s senior technical adviser on flexibles, umbilicals and risers, in July 2020.

Putting TCP to the test

Even so, the development of TCP has not lain with operators but rather with two small companies: Airborne Oil & Gas, based in the Netherlands, and the UK-headquartered Magma Global. As a certification body, DNV GL was instrumental in devising a unified standard of production in 2015.

“That JIP [joint industry project] was attended by more than 20 companies across the value chain for thermoplastic composite pipes, from majors to end users, service companies, pipe makers and material suppliers,” says Moslemian.

The result was DNVGL-ST-F119, which, two years ago, became the market standard for TCP.

Its arrival came in time for a boom in interest among operators in TCP in the Brazilian market. The discovery of abundant reserves off that country’s coast and the ensuing pre-salt development has led to one of the largest offshore structures in recent years.

“There will be a lot of need for pipes, risers and so on,” says Moslemian, to service some of the deepest reservoirs in the oil and gas market – some 2km or more beneath the waves.

What’s more, he explains, “the reservoir composition, the oil and hydrocarbon[s], has a lot of CO2 in it, as well as some H2S [hydrogen sulfide], which is extremely corrosive”.

Interest in thermoplastic composite pipes hasn’t just been limited to operators off the Brazilian coast. New TCP projects were launched by Airborne Oil & Gas in Africa and Australia in 2020. Meanwhile, in the Gulf of Mexico, oil majors are devising new and interesting applications for the material, starting with water injection lines.

“Instead of basically changing pipes every seven to ten years because of corrosion, they can use these pipes in these applications,” says Moslemian. “The temperatures are typically not very high [and] the pressures are not very high. So, you can have a really cost-effective, rather cheap solution where you can put it on the seabed and just forget about it.”

New applications are also being found downhole, where loading conditions are more complex and the threat corrosion can pose to steel components is much higher. Interest in using TCP in this area is particularly strong among operators in the Middle East, most notably Saudi Aramco and Adnoc, both of which spend millions of dollars every year replacing badly-corroded steel parts.

With that in mind, DNV GL has begun a new JIP to investigate just how well TCPs and thermoset pipes can cope with downhole environments. This, Moslemian later concedes, is a bit of a simplification. TCPs may be able to withstand extreme pressures and temperatures, but it also floats, meaning that operators will need a way to keep said pipes from bobbing up to the surface every so often.

“You need some sort of clamping or chaining, basically to keep them at the seabed,” says Moslemian. “When it’s for a dynamic application – such as risers – then you need to also have certain weights, so that the pipe becomes dynamically stable.”

This is not a difficult obstacle for oil and gas engineers to overcome, however; merely a kink in what Moslemian considers to be a breakthrough material for piping throughout offshore oil and gas.

A more interesting challenge lies in the integrity management of TCP pipes, given how recently the material has been introduced to the marketplace.

As such, operators are in roughly the same position as they were in the 1950s – using a new material that, on the face of it, is strong and able to cope with extreme environments, but not being fully able to predict what sustained use will do to it after five, ten or 20 years.

Unlike the first offshore developers, however, companies can now rely on certification bodies like DNV GL and others to investigate precisely this problem. “On that front, we are starting a new joint industry project with end users, pipe-makers and service companies to really look into the integrity management of these pipes, and develop a guideline,” says Moslemian.

Whatever the results of this JIP, the project is a sign that the offshore sector is beginning to embrace alternatives to steel for its pipework across the board, with TCP set to become a fixture in the market for some time to come.