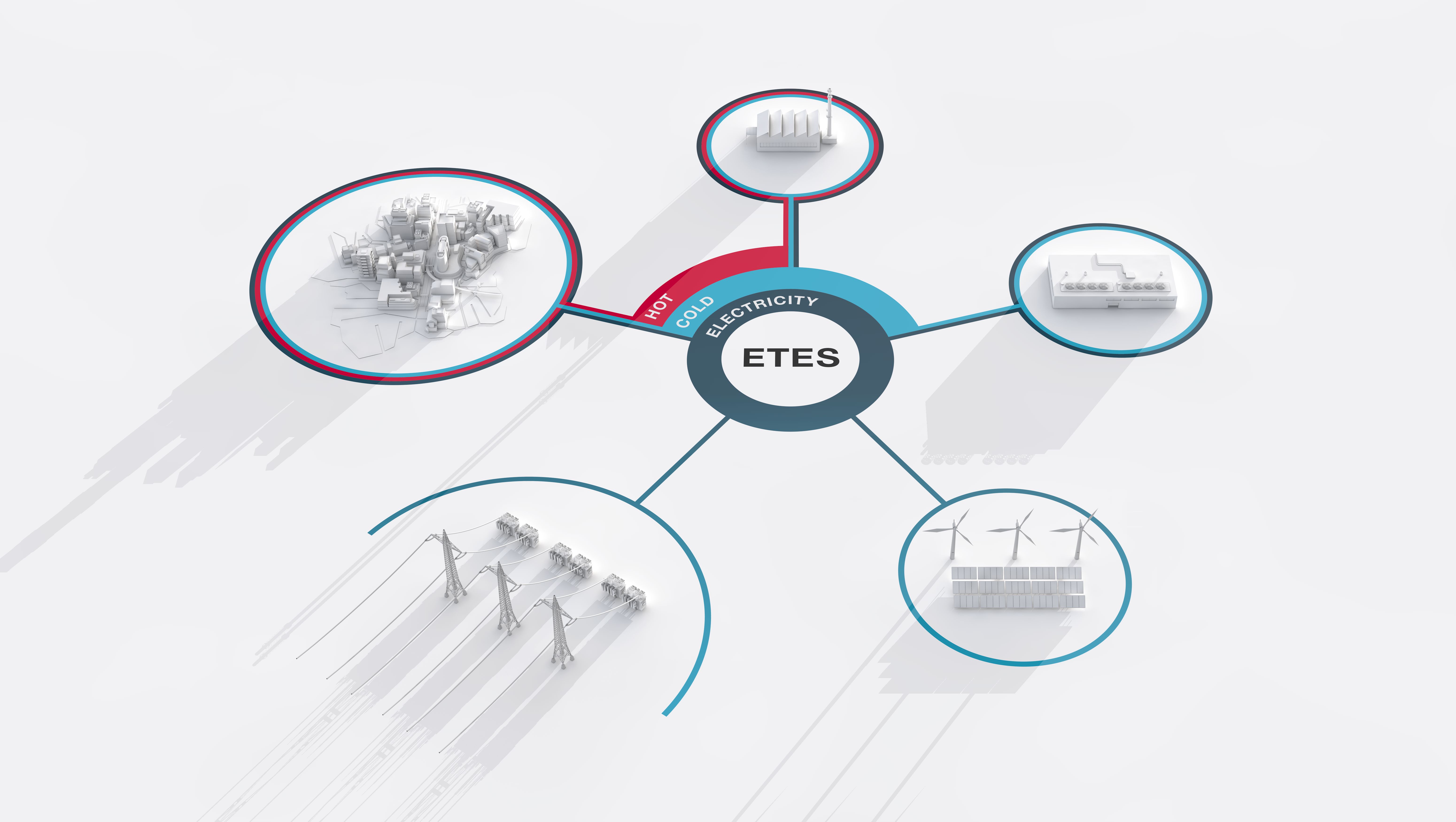 Electricity storage capacity is at a premium right now, and the demand for it is certain to increase significantly in the coming years.

However, to date there have been limited options for largescale and efficient energy storage.

Now, though, with the exploitation of a novel thermodynamic cycle, an attractive, scalable and efficient technology has emerged.

The technology potentially offers a comprehensive solution to a host of today’s pressing energy system challenges.

Commercial development of MAN ETES began in March 2018 with the signing of a
co-operation agreement between MAN Energy Solutions Switzerland and ABB Switzerland.

The trigeneration energy management system based on the use of carbon dioxide (R744) as the working refrigerant is one of only a few large-scale energy storage solutions available, and the only one capable of using, storing and distributing heat, cold and electricity simultaneously.

At the heart of the system is a reversible patented thermodynamic cycle for the conversion of electrical energy into thermal energy in the form of hot water and ice.

The stored thermal energy can be directly distributed or reconverted into electrical power depending on demand.

Scalable and site-independent, the closed carbon dioxide cycle, which is compressing and expanding through turbomachinery and storing or extracting the resulting heat and cold in insulated water tanks, is low risk, has high resilience (similar to a fridge) and has a low environmental impact.

During the charging cycle, excess renewable generating capacity can be used
to run the turbocompressor, compressing the carbon dioxide to around 140 bar and 120°C or more (within a single stage group).

The carbon dioxide then passes through a heat exchanger, transferring heat to the hot tanks – eg, three atmospheric, one pressurised – each at a separate temperature level.

The still pressurised carbon dioxide is then fed into an expander where it liquefies and cools down as the pressure falls.

A second set of heat exchangers transfers the cold into the ice storage.

To reverse the process, gaseous carbon dioxide is fed into the heat exchangers on the cold side of the system where it condenses and the temperature of the cold tank increases.

The now liquid carbon dioxide then passes through a pump to increase its pressure, before evaporating in the exchangers on the hot side of the system.

The heated, pressurised carbon dioxide (in supercritical condition) then passes through an expansion turbine with a generator attached to produce electricity.

Built to perform reliably in rugged extremes, these units are, in addition to “conventional” gas compression applications, also currently operating at the Åsgard subsea compression station, 300 metres below the surface of the North Sea, approximately 175km west of Karmøy, Norway.

The multi-stage radial compressor with casings designed for 220 bar is arranged in a single configuration together with its highspeed electric motor and features a 7-axis active magnetic bearing system.

The absence of oil and sealing systems reduces complexity while the footprint shrinks by 60% and the weight by 30% compared with traditional compressor designs.

The resulting compact compressor family is currently available in a power range of 4MW to 16MW electrical.

Although compression systems running at pressures above 400 bar are available, in MAN ETES the attractive qualities of using supercritical carbon dioxide as a working fluid sees process conditions of roughly 140 bar and 120°C (as already noted), well within the unit’s capabilities.

Because of the system’s robustness and reliability and the use of a closed loop carbon dioxide cycle, operations and maintenance costs are anticipated to be low.

In addition, by using water as the heat storage medium and multiple temperatures in the different storage tanks, some of which may only require minimal insulation, overall capex is foreseen to be competitive.

Functioning as a large battery, MAN ETES has an electrical round trip efficiency of approximately 50%.

However, that figure is expected to increase as both the technology and operational experience improves – in the near future, round trip efficiencies of 65% or more are considered feasible.

This is close to the efficiency levels seen in conventional chemical batteries.

However, whereas after a relatively limited number of charge and discharge cycles the efficiency of batteries starts to drop, MAN ETES is expected to maintain stable performance throughout its designed 25 year lifespan.

Using a technology originally designed for subsea applications, where reliability and service longevity are paramount considerations, major service intervals are estimated to be ten years or more.

In addition, unlike batteries, this technology does not require the sourcing of rare earth elements or the challenges of similar supply chain issues.

Tested by multiple external bodies, the MAN ETES process is based on solid engineering and thermodynamic principles using technology from tier 1 original equipment manufacturer (OEM) companies, which are proven across multiple applications in the harshest environments.

MAN ETES is a simple reconfiguration of those technologies into an efficient and sustainable energy conversion system.

As a modular and easily scalable energy storage and management solution for mid- to largescale thermal and electrical consumers, primary markets for this technology are industrial and municipal consumers.

Unique to the system are the multiple tanks operating at different temperatures.

Not only does this maximise the cycle efficiency, it is also well suited to many process industries.

With hot side temperatures ranging from, say 20C to 120C and cold down to zero, a huge range of applications is possible, from sterilisation and comfort heating of large buildings to cooling power hungry data centres.

A typical 5MW electrical system and a six-hour charging cycle may have an electrical storage capacity of 30MWhe, 110MWht of heat and roughly 80MWht of cold.

Based on these figures and depending on usage, electricity purchase, sale prices and other factors, a payback of five years or even less is predicted.

Alongside diverse electricity markets such as peaking power, grid balancing and time shifting renewable generation, the flexibility of the system allows additional electricity to be generated if there is excess thermal capacity, for example within a district heating set up during the summer months.

While the suggestion is that MAN ETES would use renewable energy as much as possible, any source of electricity is potentially of value.

For instance, low cost energy produced at night and stored may generate a margin for MAN ETES owners when sold during daytime peak demand hours.

The new technology is also anticipated to emerge as a significant enabler of renewable energies in certain developing or island nations reliant on expensive-to-run conventional gensets, but with an abundance of solar energy.

Overall, demand for utility-scale storage is anticipated to soar in the coming years.

According to a recent report from IHS Markit, a total of 4.3GW of grid-connected energy storage will be deployed globally in 2019 alone.

Annual installations are expected to grow to more than 10.6GW by 2025 while annual gridconnected energy storage hardware revenues are projected to grow from $3.7bn in 2018 to $8.4bn in 2025 at a compound annual
growth rate (CAGR) of some 12%.

Countries such as the US, South Korea, the UK and China currently lead the field in storage installations, but many others are accelerating their roll out of utility-scale storage. 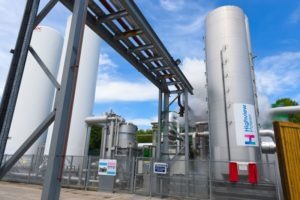