Yamana Gold begins production at Cerro Moro mine in Argentina 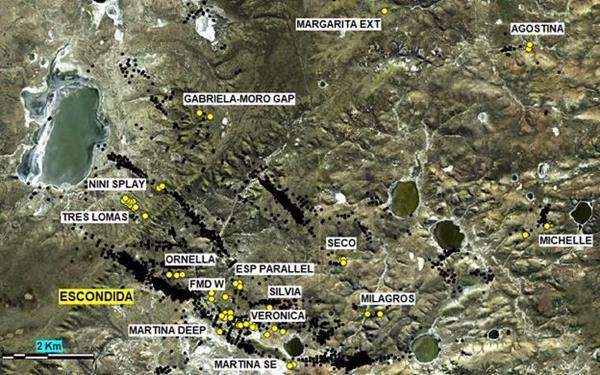 Image: A map showing location of all completed exploration drill holes at Cerro Moro mine. Photo: courtesy of Yamana Gold.

Located in the Deseado Massif, which is a tectonic block in the central-portion of the Santa Cruz Province, the 60,000km² Cerro Moro mine comprises a series of low to intermediate sulphidation veins with high-grade gold-silver mineralization.

The firm started operations at the mine by feeding gold and silver ore to the 1,000 ton per day processing plant in April 2018. Production has then been ramped up in the second quarter of 2018.

Yamana COO Daniel Racine said: “We are pleased that Cerro Moro, an operation that we expect to contribute significantly to our production, has reached this important commercial milestone.”

The company plans to source the mine’s high-grade epithermal gold and silver veins by a combination of open pit and underground mining.

Yamana CFO Jason LeBlanc said: “Cerro Moro is expected to generate a disproportionate amount of cash flow and free cash flow relative to the comparatively small-scale nature of the operation.

“With the planned reduction in expansionary capital spending and the anticipated strong margin to metal prices at Cerro Moro, per prior guidance the step change in cash flow we have planned is expected to begin in the second half of 2018 and be more pronounced beginning in 2019.”

At the mine, the firm now plans to focus on optimizing the operation and ensure operating costs reach guidance levels, the company said.

Based on the company’s operational outlook, the mine is expected to produce 85,000oz of gold and 3.75 million ounces (Moz) of silver.

Yamana earlier said it has increased the project’s exploration budget for this year to $11.2m from $9m in the first quarter of this year.