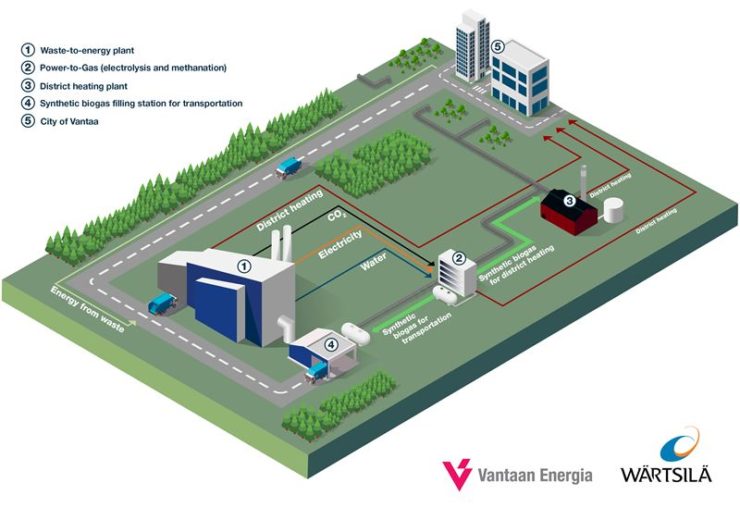 Rendering of synthetic biogas production in a Power-to-Gas facility at Vantaa Energy’s waste-to-energy -plant for the needs of district heating and transport. (Credit: Wärtsilä.)

Both the firms have agreed to work on a joint concept feasibility study for a power-to-gas facility at Vantaa Energy’s waste-to-energy facility in Vantaa, Finland.

Wärtsilä said that the power-to-gas plant will produce carbon-neutral synthetic biogas by utilising carbon dioxide emissions and electricity which is generated at the waste-to-energy facility.

The joint study intends to confirm the optimal size of the project, the cost of synthetic biogas for district heating, as well as to understand the boundary conditions for project feasibility.

Vantaa Energy CEO Jukka Toivonen said: “We need to take fast and determined action in order to stop the climate crisis. In this situation, we energy companies have a significant role to play. We have stepped up the pace, and we will end the use of coal already in 2022.

“We want to be a driver for change in the energy sector. We are actively and with an open mind seeking the best possible methods of producing energy in a smart and sustainable way and at a reasonable price.”

Upon confirming the feasibility, both the companies plan to continue the joint development of the project for a commercial-scale pilot project.

The technology company said that the produced synthetic biogas is expected to replace the use of conventional natural gas in district heating, while reducing Vantaa Energy’s carbon dioxide emissions.

Wärtsilä is planning to use its know-how in the power-to-gas process and technologies while Vantaa Energy plans to bring its experience and understanding of the district heating business and project-specific requirements to the feasibility study.

Recently, a consortium comprising Wärtsilä and Uniper has secured a contract to develop a 105MW combined heat and power (CHP) gas engine plant in Germany.