EPL 7525 covers an area of 1,056.9964 hectares, situated to the west of Trigon Namibia’s Kombat Project and south of the Company’s Gross Otavi project 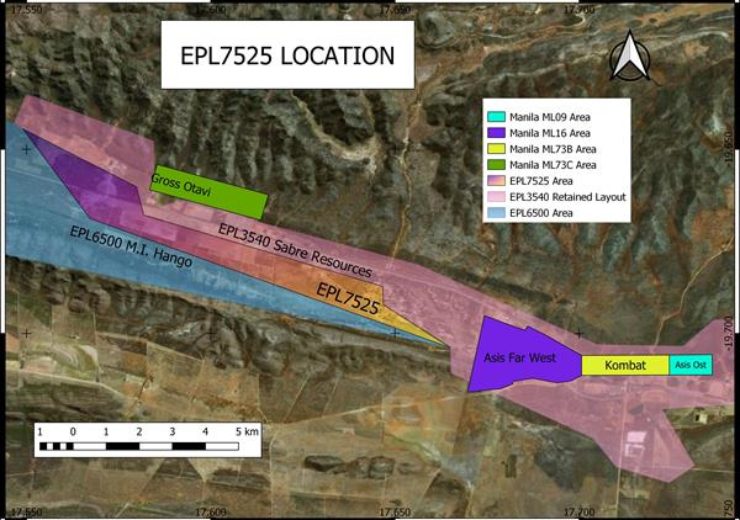 Trigon Metals Inc. (TSX-V: TM) (“Trigon” or the “Company”) is pleased to announce that Trigon Mining (Namibia) (Pty) Ltd (“Trigon Namibia”), Trigon’s 80% owned subsidiary, has been awarded a new Exclusive Prospecting Licence No. 7525 (“EPL 7525”) by the Ministry of Mines and Energy in Namibia.

EPL 7525 has been awarded to Trigon Namibia for a three year period, commencing on January 17, 2020, in respect of base and rare metals, industrial minerals and precious metals, subject to the terms and conditions of the Minerals (Mining and Prospecting) Act No. 33 of 1992 relating to exclusive prospecting licences.

EPL 7525 covers an area of 1,056.9964 hectares, situated to the west of Trigon Namibia’s Kombat Project and south of the Company’s Gross Otavi project.

The Kombat Project, comprising three of the Company’s five active mining licences, is located on the northern limb of the Otavi Valley Syncline, localized immediately below the contact between dolostones of the Hüttenberg Formation and phyllites of the overlying Kombat Formation of the Mulden Group.

A series of copper-lead deposits have been mined on the Kombat property, localized within the 200m wide vertical to sub-vertical Fracture Zone. This Fracture Zone and the lines of mineralized bodies cut the northern limb of the Otavi Syncline at an angle causing a shallow plunge to the west.  The extent and location of the Fracture Zone have been modelled from the data in the Kombat Project borehole database which contains nearly 700km of borehole data.

The Company believes that the area licenced under EPL 7525 holds significant upside potential for the Kombat project providing access to the area to the west of the Asis Far West shaft, where the geological model indicates there is potential for a westward extension of the Asis West mineralized zone.

The westward extension of the Fracture Zone into EPL 7525 was inferred from airborne magnetic data. EPL 7525 adds some 11km of Fracture Zone strike to the existing 7km of strike covered by the Kombat mining licenses. The shallow plunge westwards is expected to be mitigated by the commonly occurring transverse faults which, like the Kombat West Fault, have a vertical upwards component causing the Fracture Zone to be located closer to surface.

Jed Richardson, Chief Executive Officer of Trigon, commented: “We are extremely pleased to have been awarded this licence which supports our strategy of bringing the Kombat mine back into production and realizing the upside potential both within our existing mining licence areas and the surrounding region.  The new EPL presents exciting exploration opportunities for the project over the upcoming months, while we continue to drive our production restart.”

Profiling the top five bauxite producing countries in the world