Toyota to produce and supply hydrogen from renewable energy

Toyota Motor Corporation announces today that it has newly introduced SimpleFuel to its Motomachi Plant in Toyota City, Aichi Prefecture. 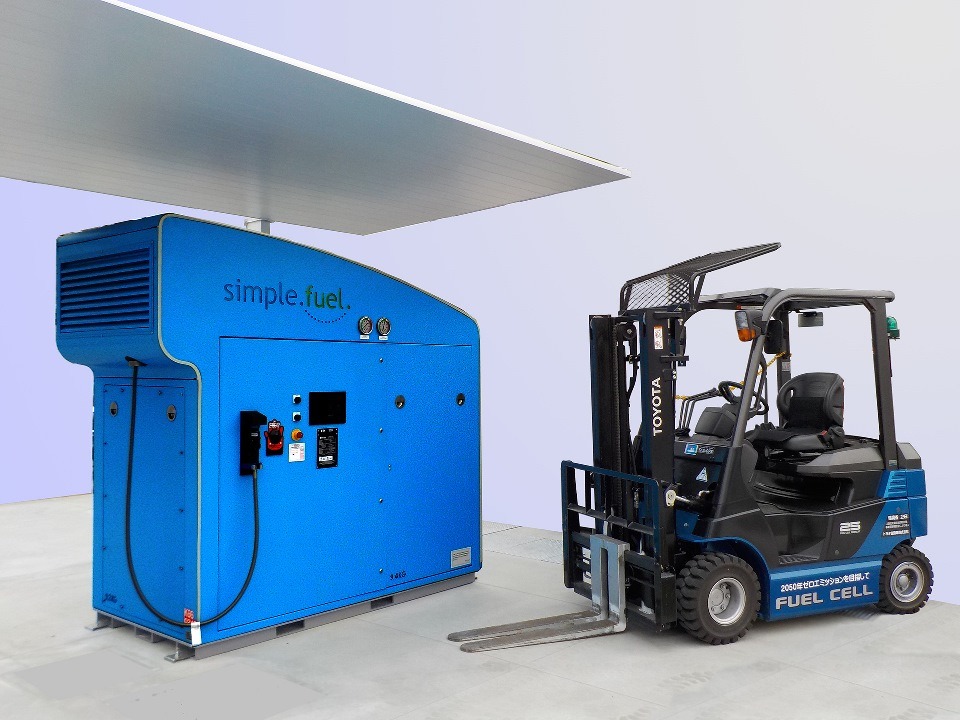 SimpleFuel is a small water electrolysis-based machine for hydrogen generation and filling that can produce, store, and supply hydrogen by making use of electricity generated from solar power, a renewable energy resource.

SimpleFuel is a simplified hydrogen station that uses electricity from solar panels at the plant site to produce low-carbon hydrogen from the electrolysis of water, which is then supplied to fuel-cell forklifts (FC forklifts) after it is compressed and pressurized. It can produce up to 99 Nm3/day (approx. 8.8 kg/day) of hydrogen, enough to fuel seven or eight FC forklifts. Its compact size means it can be installed in small spaces, making it suitable for refueling FC forklifts within the plant.

A hydrogen station has been running at Motomachi Plant since March 2018, in conjunction with the increasing numbers of FC forklifts in use there. By working to support fueling through the use of SimpleFuel, with an eye toward the rising demand for hydrogen, Toyota aims to reduce CO2 emissions at the Motomachi Plant and intends to support the accumulation of new technologies and knowledge.

To reduce CO2 emissions at its plants, Toyota intends to replace existing conventional forklifts with fuel cell forklifts. This endeavor began at Motomachi Plant, with the introduction of two Toyota Industries Corporation FC forklifts in 2017, followed by an additional twenty in 2018. This year, the Ministry of the Environment’s “Subsidy for Business Costs, etc. for Measures Combating Carbon Dioxide Emissions (Project to Promote Low Carbon Social Infrastructures that Utilize Renewable Energy-based Hydrogen)” makes possible the introduction of SimpleFuel and an additional 50 FC forklifts.

Through the Aichi Low-Carbon Hydrogen Supply Chain Promotion Association, along with Aichi Prefecture and related local authorities and companies, Toyota is promoting the low-carbon footprint of the hydrogen supply chain as a whole through use of renewable resources and the concept of “production, transportation, and use.” This plan to use hydrogen produced from electricity from renewable sources generated at Motomachi Plant has now been certified through Aichi Prefecture’s Low Carbon Hydrogen Certification System.

Since launch of the Toyota Environmental Challenge 2050 in 2015, Toyota has been developing and implementing technologies by harnessing hydrogen energy, which is aimed at utilizing hydrogen at its plants to realize its Plant Zero CO2 Emissions Challenge. Toyota is steadily working on various initiatives to reach this goal, including promoting the introduction and use of SimpleFuel and FC forklifts at its Motomachi Plant.