UK-based Neptune Energy and Algerian government-owned company Sonatrach have announced the first gas in at Touat project in the Sahara Desert in Algeria. 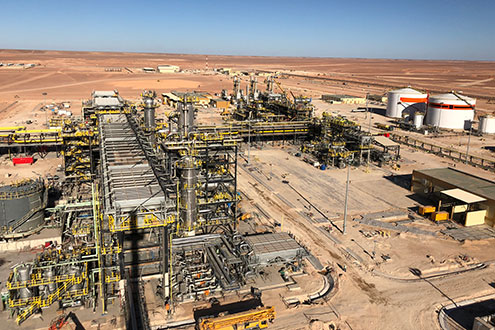 Located in the Basin of Sbaa, near Adrar, the Touat gas project is expected to have a gross production of nearly 75,000 barrels of oil equivalent per day (450 million standard cubic feet per day) at plateau from a cluster of eight gas fields.

According to Neptune Energy, the onshore gas project, which also includes a gas processing plant, remains on track to begin gas export production by the end of H1 2019.

Neptune Energy CEO Jim House said: “First gas in at Touat marks a significant milestone for this important project. We are now focused on delivering commercial full export production by the end of the first half of the year”.

Also included in the development work is the installation of a connection to the main GR5 pipeline, laid by Sonatrach, to collect the gas sourced from South West Algeria and deliver it to Hassi R’Mel, located nearly 800km to the north.

Neptune Energy entered into the Touat gas project through the $3.9bn acquisition of a 70% stake in Engie’s exploration and production business in early 2018.

Prior to that, in March 2010, Sonatrach and Engie established the Algerian joint venture Groupement TouatGaz (GTG) as the operator of the development and production operations. Currently, Neptune Energy has an indirect equity interest in GTG.

As per the company website, the UK-based firm is the operator of the onshore Algerian gas project with a stake of 35% while Sonatrach and Engie, hold stakes of 35% and 30%, respectively.

In 2013, GTG awarded a $1bn contract to engineering services provider Tecnicas Reunidas to carry out engineering, procurement, construction and commissioning (EPCC) work for the Touat gas project. This was about four years after the development plan of the Touat natural gas field was approved by the National Agency for the Promotion of the Hydrocarbon Resources of Algeria (ALNAFT).