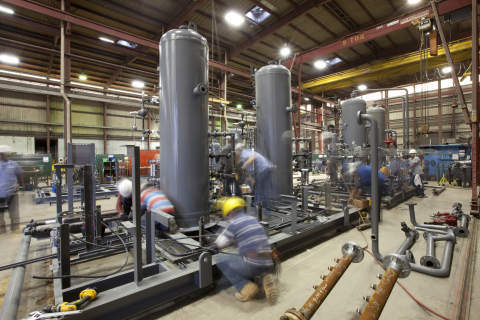 The new company plans to scale up quickly, aiming to become the market leader in the design, engineering and manufacture of oil and gas production equipment used to separate, process and treat hydrocarbon streams – including glycol regeneration dehydrators, as well as two- and three-phase separators.

Titan’s massive 210,000 square-foot Columbus, Texas production facility is one of the largest of its kind in the United States. With a capacity to manufacture more than 4,000 units a year, Titan’s plant features a fit-for-purpose layout designed for high-volume, complex manufacturing.

Titan is continuing an oil and gas field legacy that began in 1927. The company began as Smith Industries, becoming Hanover-Smith and then Exterran before Castle Harlan, Inc., a private equity investment firm, acquired the company’s North American production equipment manufacturing assets and created Titan this year.

“Over 80 employees have been hired, with plans to expand our team to 200 by year’s end. More than 90 percent of our team is part of the company’s legacy, bringing with them a rich skill-set of product and design knowledge.

“It’s what our Columbus facility is known for – delivering high-quality products on-time to our customers.”