The partnership with Proman will enable TAZIZ to construct a 1.8 million tons per annum methanol production facility at the TA’ZIZ Industrial Chemicals Zone in Al Ruways Industrial City, Abu Dhabi 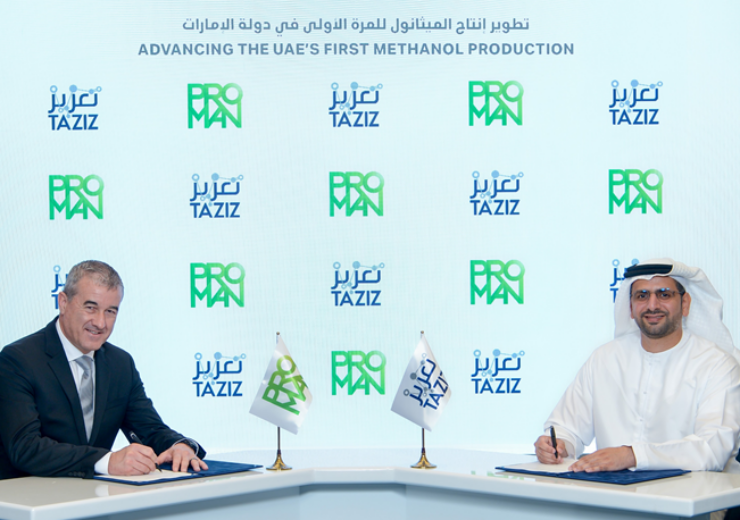 The new Methanol facility will be built at the TA’ZIZ Industrial Chemicals Zone. (Credit: ADNOC Group)

The new methanol unit will be constructed at the TA’ZIZ Industrial Chemicals Zone in Al Ruways Industrial City, Abu Dhabi.

The facility is expected to have an annual capacity of up to 1.8 million tons and will meet growing domestic and international demand for this clean and versatile chemical commodity.

Methanol has broad applications, including in fuels, solvents, pharmaceuticals, and construction materials and is recently gaining popularity as a low-emission fuel.

“Our partnership with Proman underlines the UAE’s attractiveness as a destination for international partners and investors as we progress plans to produce methanol at world-scale in Al Ruways.

Formed by ADNOC and ADQ, TA’ZIZ is said to drive and expand Al Ruways Industrial City, along with Abu Dhabi’s wider chemicals, manufacturing, and industrial sectors.

The total investment for the first phase is estimated to be more than $5bn, with most of the chemicals produced in the UAE for the first time.

The new methanol facility is in line with the UAE’s Ministry of Industry and Advanced Technology’s goal of diversifying the UAE’s economy and advance industrial development.

In addition, Fertiglobe, Mitsui & Co. and GS Energy have also partnered with TA’ZIZ to develop a large-scale low-carbon ammonia facility.

“As well as being Proman’s first investment in the UAE, we are working to ensure that this proposed project will be one of the most technologically advanced and low-emission natural gas-to-methanol facilities in the world.

“With growing global demand for methanol as a cleaner fuel, this agreement demonstrates the huge potential for the TA’ZIZ Industrial Chemicals Zone and Abu Dhabi’s evolving downstream industry.”