Surge has an option to earn in a 60% interest in the Hedge Hog project from Eastfield Resources by making cash and/or share payments totalling $500,000 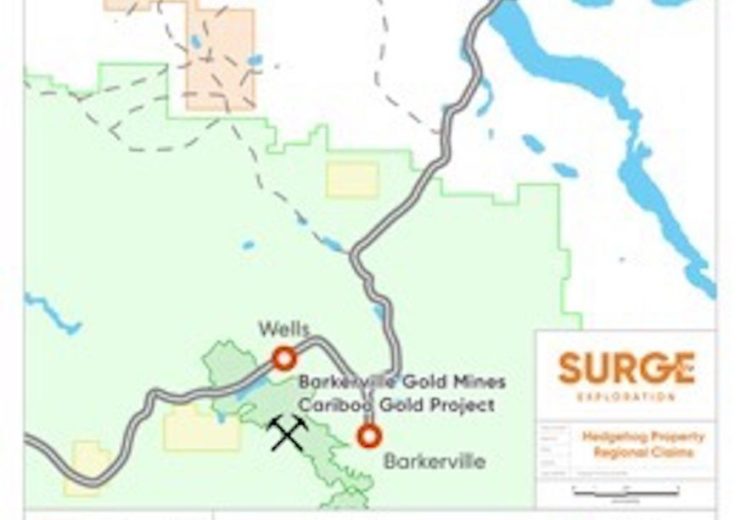 Surge Exploration has announced the starting of its 2019 exploration program at the Hedge Hog copper-gold project.

The Hedge Hog project is located in Central BC several kilometres north of the historical community of Barkerville, BC (see Barkerville Gold Mines (Barkerville) for additional current activity in this area). The community of Quesnel BC is located 60kms to the west of the property. Surge has an option to earn in a 60% interest in the Hedge Hog project from Eastfield Resources by making cash and/or share payments totalling $500,000 and completing exploration expenses totalling $2,500,000 over a five-year term.

Central to the Hedge Hog project is an area where massive sulfide boulders with high concentrations of copper, silver and cobalt were discovered twenty years ago. The most extensive exploration in the area of the current Hedge Hog claim was by Hudson Bay Exploration and Development (later Hudbay Minerals Inc. (“Hudbay”) between 1999 and 2001. Hudbay completed airborne and ground based geophysical surveys, extensive geochemical surveys, mechanical excavator trenching and four short diamond drill holes (556 metres total).

The most successful undertaking by Hudbay was trenching in an area called the Lottie target where a massive sulfide boulder (chalcopyrite rich) grading 24.3% copper and 19.6 g/t silver had been discovered in 1999. In one mechanical trench near the 1999 discovery five additional massive chalcopyrite rich boulders were sampled with an average grade of 8.8% copper, 9.6 g/t silver (the Hudbay boulder assay results are historic and replicate samples are not available and consequently have not been confirmed). In 2018, Surge collected 843 soil samples at Hedge Hog.

The current program will consist of test pitting using a mechanical excavator of anomalous sample sites from the 2018 work. A multi-year exploration permit authorizing a wide spectrum of activities including geochemical and geophysical surveys, mechanical excavator trenching and diamond drilling was issued to Eastfield in 2018.

Mr. Tim Fernback, Surge President & CEO, comments, “Our Hedge Hog exploration property in British Columbia’s Cariboo Mining District appears to well situated given the proposed 2019 exploration activity in the area by our neighbours. This 2019 activity includes CAD$23.7 million to be spent by Barkerville Gold Mines Ltd. nearby our Hedge Hog Property. This region is host to numerous operating mines, good infrastructure including experienced exploration and supporting services. Our exploration team believes that this land package is strategically situated to exploit the high copper-gold values of the region.”